Nigerian environment activist Nnimmo Bassey was awarded the Right Livelihood Award for his work exposing the ecological and human atrocities of oil extraction. Deutsche Welle caught up with him at the UN Climate Summit. 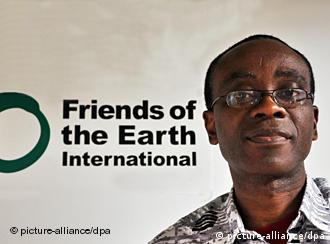 Bassey is Chair of Friends of the Earth International

On December 6, the Swedish parliament awarded Nnimmo Bassey the so-called "Alternative Nobel Prize" in recognition of his inspired work to strengthen the environmental movement in his home country of Nigeria and throughout Africa. As Executive Director of Environmental Rights Action in Nigeria and Chair of Friends of the Earth International, Bassey has become one of Africa's leading advocates for environmental protection and human rights. He has been particularly influential in mobilizing resistance to multinational oil corporations in his country, drawing attention to the environmental devastation they leave behind and their disregard for the rights of the local population.

After receiving his award in Stockholm, Bassey traveled to Cancun, Mexico, where Deutsche Welle interviewed him on the sidelines of the UN Climate Summit.

Deutsche Welle: How did you feel when you got the prize?

Nnimmo Bassey: When I stood on the platform to receive the reward my mind went to many, many things. And particularly to a fellow Nigerian who won the award in 1994 – the late Ken Saro Wiwa, our number one environmentalist and defender of the environment who was executed in 1995. He won the award in 1994. And when I stood up there, I knew I was standing on the shoulders of a great man who showed me how to fight for environmental justice and how to resist big corporations who are bent not only on destroying Nigeria, but on destroying the climate -- destroying the climate of the world by pollution and by release of greenhouse gases into the atmosphere.

Are you afraid of facing the same fate as Ken Saro Wiwa?

Looking at the negotiations here in Cancun, do you feel they are focused on the things that really matter, for example oil extraction, destruction of the environment and climate change?

I think the negotiations to a large extent are not focusing on the real issues. Climate change is caused by very fundamental structural, systemic problems. One of which is the crisis driven by the market. All the negotiators talk about is how to use the market to soften global warming -- carbon offsetting by planting a tree somewhere in Africa while you keep polluting in Europe. This is not a solution, because pollution emissions have to stop at the source. And they are not talking about lifestyle changes; they are not talking about less consumption and less of production. Now we have big everything: big oil, big water, big fish; and everything is coming to an end. And we would expect our negotiators to look at this problem, the problem of overconsumption and overproduction. We don't have more than one planet and we cannot go on at the speed and the rate and the direction that we are going now. We cannot keep pushing on with fossil-fuel driven civilization. We have gone beyond half of the known reserves in the world and we've done this in only a couple of years, maybe 100 years or so. How are we going to run on a half tank until eternity? You see, it is impossible. So our leaders are here to talk about how to get money, how not to make commitments or reduce emissions and other, poorer countries are looking at how they can get funding from mitigation.

Even assuming all countries makes goods on pledges to cut greenhouse gas emissions, there's still a gap between what scientists say is needed to prevent catastrophic effects of climate change and what's been promised. (08.12.2010)

While the world focused on the plight of those affected by the Gulf of Mexico oil spill, there were millions of people at the far side of the Atlantic suffering the same fate. But their stories were rarely heard. (27.06.2010)

Website with information on the prize and biographies of the winners from 2010 and previous years.