Sexual abuse in German judo: ′I thought I must have deserved it′ | Sports | German football and major international sports news | DW | 06.12.2021

Sexual abuse in German judo: 'I thought I must have deserved it'

German judoka Marie Dinkel was sexually abused by her coach when she was 13. Now 25, she speaks to DW about her experience, lack of trust and how she hopes to help others.

Sexual Abuse in Sports - Judoka Marie Dinkel: "I thought I couldn't speak up"

"The only thing I thought was 'why isn't anyone helping me?'" That's how Marie Dinkel looks back on the worst time in her life.

Aged 13, Dinkel and two other girls joined the first team at their local club TV Gladenbach, a sports club with a judo division in a town roughly 75 kilometers (46 miles) north of Frankfurt. Along with regular training the girls also received targeted individual training in "a small, separate room of a school gymnasium," Dinkel recalls. "Given that we were three girls, this meant one of us always had to train with 'him'."

"He" was actually Dinkel's favorite coach, until the abuse started. "I trusted him, but back then I thought I wasn't allowed to say anything because I deserved it," Dinkel recalls. "Because I didn't train well or because I didn't do well in the last competition, because there had to be some reason I was being treated that way."

Dinkel remembers exactly how, during one exercise, her coach 'fixed her pelvis' with his hip. "He put his hand down my pants from behind. I couldn't free myself because I was in a state of shock," Dinkel says. "I waited for it to be over."

Another attack happened in a large training room.

"On that day, there were 10 to 15 people on the mat. I sat on the mat trolley as he came towards me and stood in front of me." In front of the team, he once again reached into her pants from behind. Today, the 25-year old believes someone must have seen it. Help though, did not arrive.

The three girls never spoke about the abuse among themselves, but at some point they started to silently tie each other's judo trousers as tight as possible before training.

It took half a year until Dinkel broke her silence when she told her mother in the car on the way home from training. Her parents told the club. The coach, who remains a teacher, was banned from the club before the case was settled out of court, according to German media. Only after he had gone did Dinkel return to training, but a feeling of blame and shame remained, a feeling that many who have suffered sexual abuse contend with. 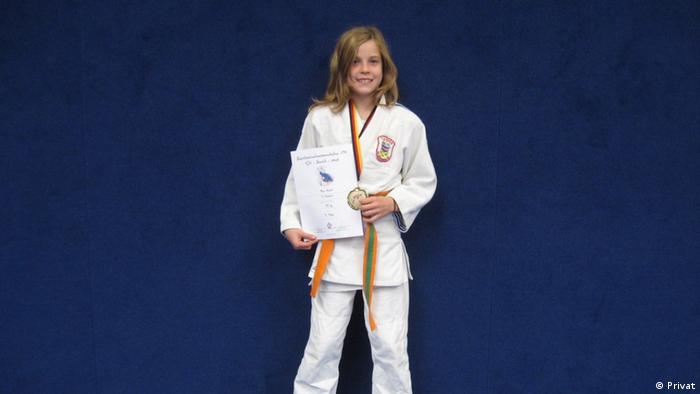 Abusers often use a form of manipulation to win trust in order to prevent the illegal act being discussed, this is known as "grooming." It's often problematic that children also sometimes have to confide in several adults before they are believed. The lack of trust from adults discourages children from trusting someone else.

Researchers from Cologne's Sports University and Ulm's University Hospital have highlighted the varying dimensions of sexual assault in sports in their "Safe Sport" study which assess the safety of children and young people in organized sport in Germany. They believe the number of affected people is around 200,000. More precise numbers are not available because there are no international standards for documenting cases of abuse.

In Germany, an "Independent Commission for Child Sexual Abuse" (UBSKM) lists police criminal records (PKS) which state that there were 14,594 instances of sexual child abuse in the country in 2020.

Unofficial research in recent years suggests that around every seventh or eight adult in Germany suffered sexual abuse in their childhood or youth — including every fifth or sixth woman. Women are also more likely to suffer cases of serious sexual abuse.

Victims of sexual abuse often suffer from the consequences for their entire lives. Serious psychological issues such as Post-traumatic stress disorder (PTSD) often follow, as Marie Dinkel knows too well. 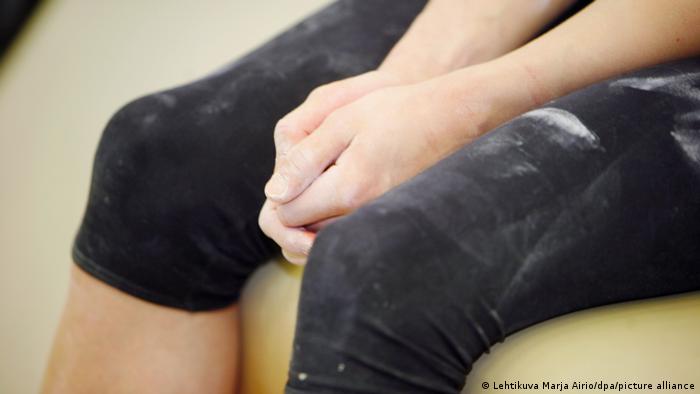 Victims of sexual abuse often feel too ashamed to speak. And when they do speak, they often aren't taken seriously.

Aged 18, Dinkel's body began to react to the trauma of her youth. She kept having panic attacks, often more than once a day.

"I would sit on the ground and rock back and forth because it somehow made me feel safe," Dinkel explains. "Sometimes I would scream. I was no longer reachable for those around me. It would always end in exhaustion. I couldn't manage any more and I would vomit."

After the attacks, Dinkel didn't feel comfortable training with men. Today, she has overcome that and she no longer has to contend with panic attacks either. Of course the topic remains difficult, but "I have my skills and methods now that make me feel safe, and I know how to use them."

For a long time she was reserved, but her husband, with whom Dinkel lives in Switzerland today, encouraged her to speak publicly about her fate. In October 2020, when the German Judo Association (DJB) held an open meeting to assess sexual assault against children, Dinkel joined via video call and told her story. It made waves in the media, and something of a public reappraisal began. 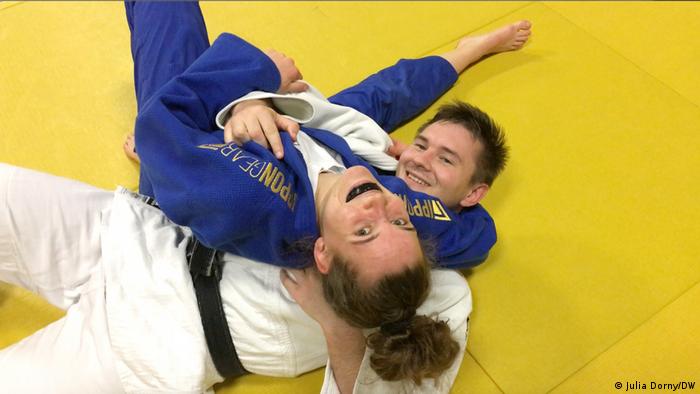 Dinkel, seen training her with her husband, needed time before she felt comfortable training with men again

"Marie is brave in that she stayed true to the sport of Judo after what she experienced. She wanted to continue despite everything that happened to her," says her husband. "She's still constantly working through it. It doesn't disappear from one day to the next. It's a difficult process and one she goes through every day — in judo and other situations."

Dinkel now fights in the second judo Bundesliga and is also active as a coach. Her main job is as a physiotherapist in Switzerland. She wants to be a go-to person for athletes and women who have experienced the same as her. But the readiness to broach the topic of sexual abuse in sport is still lacking, and many victims still feel they are not taken seriously.

But Dinkel is helping drive change, particularly in local clubs. At her former club, TV Gladenbach, where she suffered as a child, there are now two people in charge of child protection, one of whom is Dinkel's brother, Ben.

Top US gymnasts slammed the FBI for failing to act on complaints against an ex-doctor convicted of serial sex abuse. They recalled how gymnastics officials 'turned a blind eye' to their abuse.

Sexual Abuse in Sports - Judoka Marie Dinkel: "I thought I couldn't speak up"