Top US gymnasts slammed the FBI for failing to act on complaints against an ex-doctor convicted of serial sex abuse. They recalled how gymnastics officials 'turned a blind eye' to their abuse. 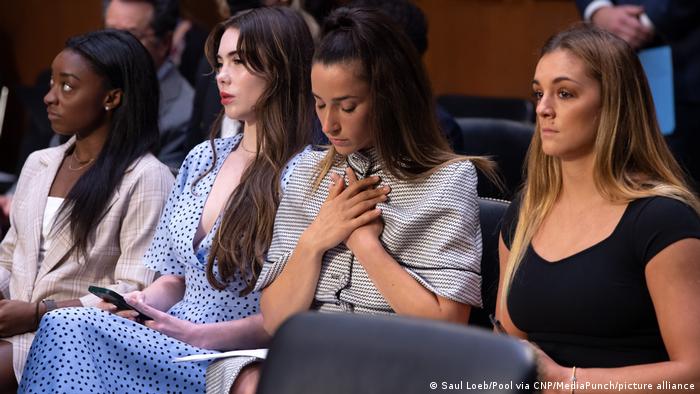 They told lawmakers how the FBI and US sports officials failed to stop the sexual abuse from former doctor Larry Nassar despite complaints.

"We have been failed, and we deserve answers," 24-year-old Biles said, holding back tears, at a Senate Judiciary Committee.

"To be clear, I blame Larry Nassar, but I also blame an entire system that enabled and perpetrated his abuse," she said, alongside fellow gymnasts McKayla Maroney, Aly Raisman, and Maggie Nichols.

The USA Gymnastics and the US Olympic and Paralympic Committee failed to act while the FBI "turned a blind eye," Biles added.

The hearing came after the US Justice Department's Inspector General Michael Horowitz issued a scathing report in July, blasting the FBI for the botched investigation.

Who is Larry Nassar?

The 58-year-old worked with USA Gymnastics and Michigan State University (MSU) as a team doctor during which time he sexually assaulted women and girls.

Although he was first reported in 2015 to the FBI by USA Gymnastics, he continued to work at MSU and assaulted at least 70 more women until he was finally arrested.

He was found guilty in three separate cases and sentenced to life in prison in 2018. One of the prison sentences ran up to 175 years.

Maroney recalled how she detailed her account of the abuse by Nassar she had endured during the London Olympic games.

She said she spent three hours on the phone with an FBI agent and, in the end, her complaint was "minimized and disregarded."

"Not only did the FBI not report my abuse, but when they eventually documented my report 17 months later, they made entirely false claims about what I said," the 24-year-old said. 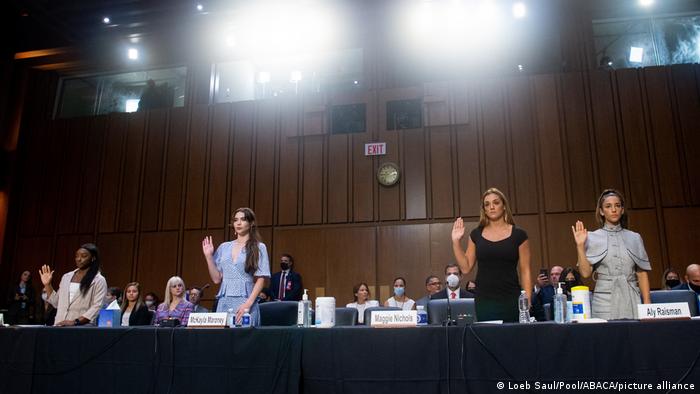 "They allowed a child molester to go free for more than a year," she added. "They had legal, legitimate evidence of child abuse and did nothing."

Raisman, former captain of the gold medal-winning US Olympic team in 2012 and 2016, said the delay in acting on complaints was "like serving innocent children up to a pedophile on a silver platter."

"I am haunted by the fact that even after I reported my abuse so many women and girls had to suffer at the hands of Larry Nassar," she said.

"Why did none of these organizations warn anyone? USAG and USOPC have a long history of enabling abuse by turning a blind eye. Both organizations knew of Nassar's abuse, long before it became public," Raisman said.

FBI Director Christopher Wray also testified before the Senate in a separate session where he apologized to the gymnasts.

"I'm sorry so many people let you down over and over again," he said.

"And I am especially sorry that there were people at the FBI who had their own chance to stop this monster back in 2015 and failed. That is inexcusable," Wray said.

"On no planet is what happened, in this case, acceptable," he told the Senate, and the conduct of the agents who botched the case "was beyond the pale."

Wray added that a senior agent in Indianapolis who failed to properly investigate Nassar had retired while another had been fired.