Serbia sees itself as both a victor and a victim of World War I - but not as a culprit. The country considers any blame placed on it as a distortion of facts. DW takes a look. 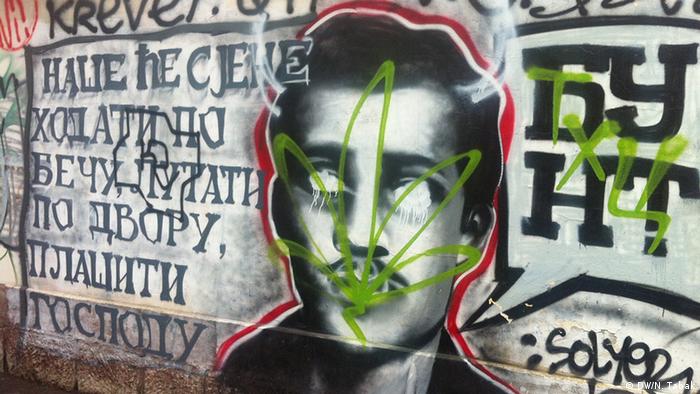 It is June 28, 1914. A young man is sitting inside a cafe in Sarajevo, the capital of Austro-Hungarian-ruled Bosnia. Under his coat he clutches a pistol. He has come here to end the life of Archduke Franz Ferdinand of Austria, heir to the Austro-Hungarian throne.

Suddenly, the royal party arrives. The young man doesn't hesitate and shoots both Ferdinand and his wife. The assassin is Gavrilo Princip, a 19-year-old Serbian student. He obtained the weapon from a secret military society known as Black Hand, which was out to create a greater Serbia. But, as it turns out, that goal diverged from Princip's original aspirations.

As a member of the Young Bosnia revolutionary organization, Princip strove for liberation from Austro-Hungarian rule and the creation of a state of united South Slavic countries, i.e., Yugoslavia. To this day, he is revered in Serbia as a national hero - and viewed as a terrorist elsewhere.

"What provided the spark for his bullets?" asked Serbian writer and historian Vladimir Pistalo: "It was because Princip had no influence on who ruled his country." For Princip, in other words, Franz Ferdinand was simply a tyrant. Following the assassination, Austria-Hugary presented the Serbian government with an ultimatum; 37 days later, World War I had broken out. 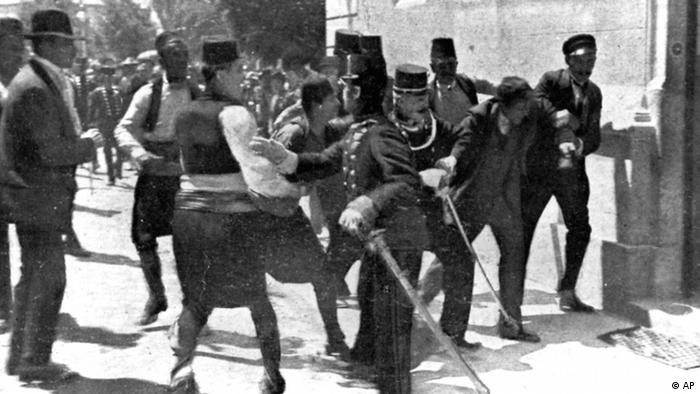 Princip was apprehended directly after the assasination

So, who is to blame? This remains the most crucial question in Serbia at this year's centenary. The debate is flooding Serbian media. Was it the "war-thirsty Teutons" - i.e.,Germans and Austrians - as the official Serbian version tells it? Or was all of Europe simply a giant powder keg waiting to blow? That the keg was ignited by a Serb, does this make the Serbian nation guilty, as some historians suggest?

Not at all, according to Serbian history textbooks. "After being unified in 1871, Germany was in a strong economic position. The military leadership in Berlin demanded a shift of power and colonial wealth," claims one standard account. It goes on to say that the central powers were simply waiting for an excuse to mobilize their troops.

Serbian President Tomislav Nikolic recently commented on the issue. He told the Belgrade daily Politika that attempts were being made to place blame on Serbia, to hold it responsible for triggering global-scale tragedies.

A circle of Serbian intellectuals that include world-famous filmmaker Emir Kusturica are even demanding that the "unlawful" trial against Princip be annulled. And the first monument dedicated to Princip is being erected in a central park in Belgrade to mark the anniversary of the outbreak of the war. 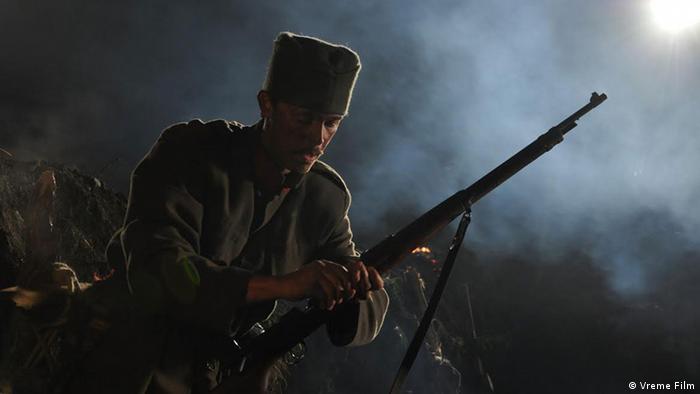 "The Hero of 1914" is the title of a new Serbian documentary by author and journalist Filip Svarm. It is not about Gavrilo Princip or the top politicians and officers of the time. The "hero" is embodied by Serbia's farmers, who made up close to 80 percent of the Serbian army. According to Svarm, the film is an attempt to put the "ordinary man" in the limelight, the Serbian farmer whose priority it was to protect his family, his property and his way of life.

A quarter of Serbia's 4.5 million residents died in World War I. Most perished in combat, while 400,000 others died of typhoid, cold or hunger. German, Bulgarian and Austro-Hungarian occupying forces executed around 60,000 Serbian civilians. This is one of the reasons why, according to Svarm, it is "unreasonable" to hold Serbia responsible. "Serbia was a victim of war - a testing ground for the power struggles between the great powers," he said.

Many Serbians still see their country as a kind of eternal victim, a target of "Germanic hatred" that manifested itself later in the Second World War and the Yugoslav Wars and continues today. This view was recently illustrated by the "Vreme" magazine, which published a previously unreleased photo of Adolf Hitler gazing at a present he received for his 52nd birthday in 1941. It was a commemorative plate, confiscated by the Wehrmacht in Sarajevo, bearing the inscription, "On this historic square, Gavrilo Princip proclaimed freedom."

Putting a face on 'The Great War'

London's National Portrait Gallery commemorates World War I by putting a face to those who fought. From propaganda videos to mutilated soldiers, the exhibition exposes a brutal - and vulnerable - humanity. (17.03.2014)

As the First World War's centennial approaches, German youth have shown a growing interest in the conflict. According to a study, 77 percent of those under 30 want to know more. But the subject is neglected in schools. (20.01.2014)