Protesters have braved a blizzard to demonstrate for a fifth week against President Aleksandar Vucic. Media freedom, an end to attacks against journalists and the opposition and electoral reform are among their demands. 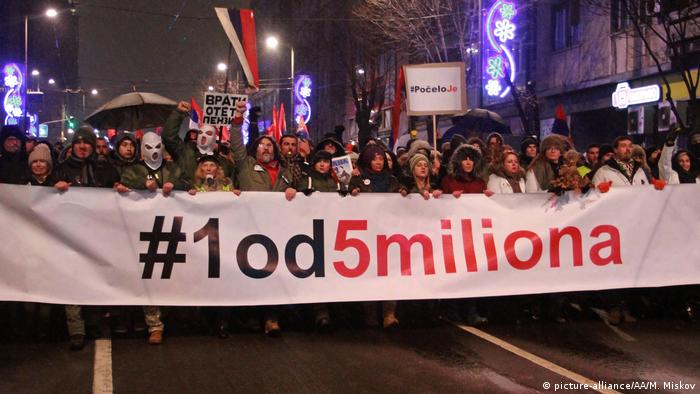 Some 15,000 demonstrators marched through the center of Belgrade, making their way to the presidency building before stopping in front of the offices of the state broadcaster RTS, which is firmly under Vucic's control.

Loudspeakers played recordings of the president's broken promises, while demonstrators blew whistles and jeered. Marchers also carried banners which read "We are the people," "Stop the treason, defend the constitution and back the people" and "Down with the thieves." 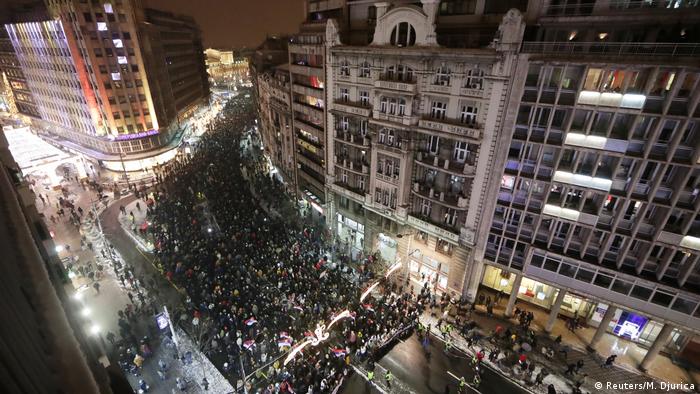 The protests, which have also been staged in the southern town of Kragujevac, were triggered by an assault on opposition politician Borko Stefanovic, who was beaten by assailants in late November. The attackers were arrested, and later freed.

Protesters are demanding electoral reform, assurances the public broadcaster will give more coverage to opposition groups and a promise that attacks on journalists and opposition politicians are thoroughly investigated.

Vucic has suggested he might call a snap election this year, with opposition groups and parties saying they would boycott any vote.

The protest movement, which has no political affiliation but has the backing of 30 opposition parties and organizations, has called Vucic an autocrat and said his party is corrupt, something the president has vehemently denied.

Vucic and the SNS have dominated parliament in three elections since 2012. He began a five-year term as president last year.

Large opposition protests are fairly rare in Serbia since the unrest that ousted Slobodan Milosevic in 2000.