Tens of thousands have turned out for a fourth week of anti-government demonstrations in Belgrade. The protesters accuse President Aleksandar Vucic of gagging mainstream media and sidelining critical voices. 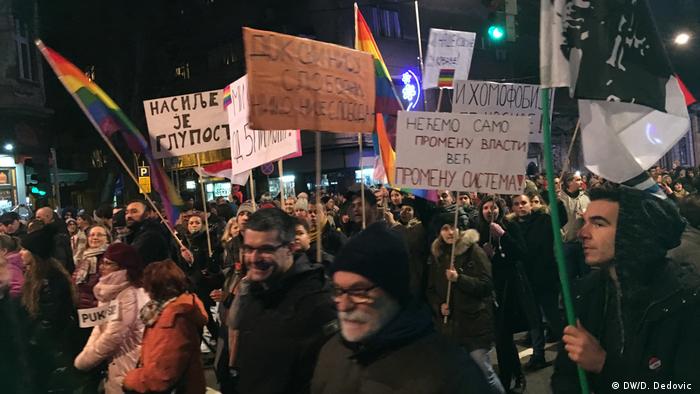 More than 20,000 Serbs took to the streets in the capital, Belgrade, on Saturday to march against President Aleksandar Vucic and his ruling Serbian Progressive Party.

The protesters, who accuse the president of stifling democratic freedoms, chanted "Vucic thief!" as they marched peacefully through the city center in the fourth such protest in as many weeks.

Vucic's opponents say the president is an autocrat who has imposed tight controls on mainstream media and sidelined critical voices. Vucic has denied the allegations.

The demonstrations have been one of the biggest expressions of discontent against Vucic and his ruling party. Serbia has rarely seen major opposition protests since the popular unrest that ousted former strongman Slobodan Milosevic in 2000.

In an interview with the pro-government Studio B TV during Saturday's protest, Vucic said he was ready to discuss opposition demands.

Inside Europe: Serbia cozies up to China

Inside Europe: Serbia cozies up to China

"I am ready to look at what causes dissent of the people," he said.

His comments came after he was jeered by a group of protesters as he entered the television studio.

Vucic, a former firebrand nationalist, has embraced pro-European values over the years and wants to lead Serbia into the European Union.

The EU has said Belgrade should "improve the situation regarding freedom of expression and freedom of the media" if it hopes to join the bloc.

The gloves were off when Serbian Prime Minister Ana Brnabic appeared on DW's Conflict Zone. The interview whipped up a frenzy in a country not used to politicians having to answer hard-hitting questions. (16.11.2018)