The Sudanese government has ordered two senior United Nations officials to leave the country. It comes amid a dispute between Khartoum and the UN's peacekeeping mission in Darfur. 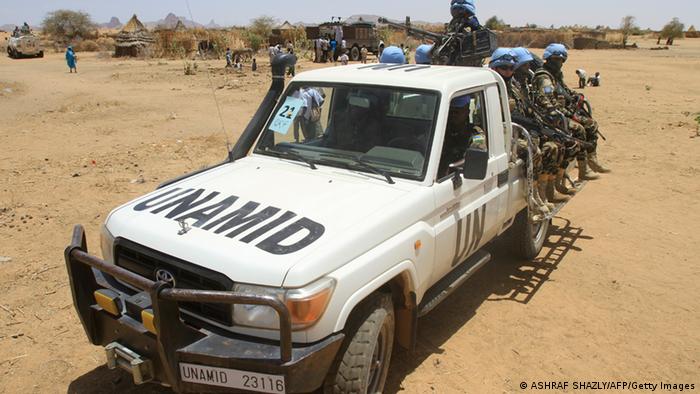 Two officials from the United Nations Development Programme (UNPD) were asked by the Sudanese government to leave, the UN said in a statement on Thursday. They were named as Jordanian Ali Al-Za'tari, the UN resident coordinator at the UNPD, and Dutch national Yvonne Helle, the UNPD's country director.

The expulsion comes after a rise in tensions between the government in Khartoum and the joint UN-African Union peacekeeping mission (UNAMID) in Darfur, the western region plagued by conflict.

The UN has objected to the move.

"The UN has filed a protest with the government of Sudan following their decision to request the departure of two senior UN officials from the country," spokesman Stephane Dujarric told news agency AFP.

"The sanctioning of United Nations personnel sent to Sudan to carry out their duties in accordance with the United Nations Charter is unacceptable. The Secretary-General (Ban Ki-moon) calls on the govenrment of Sudan to reverse its decision immediately and urges it to cooperate fully with all United Nations entities present in Sudan," Dujarric said.

Khartoum has been angered at UNAMID's attempts to investigate a report that government troops committed mass rape of women and girls in a Darfur village on October 31. Days ago, it denied peacekeepers permission to pay a second visit to the site of the alleged rapes.

The government has also demanded UNAMID form an exit plan from Darfur, where the mission has been deployed since 2007. Conflict erupted there three years earlier when mainly African tribes took up arms against the Arab-led government in Khartoum, complaining they were being marginalized.

As well as the protracted conflict in Darfur, the Sudanese government is battling an insurgency in the Blue Nile and South Kordofan regions.

WHO: Poorer nations to get first 40 million vaccines next month 3h ago

US to review Afghan peace deal with Taliban 3h ago