Self-censorship is out of the question, says Russia′s ′Novaya Gazeta′ | Europe | News and current affairs from around the continent | DW | 27.10.2010

In its 2010 press freedom index, Reporters Without Borders ranked Russia higher than in previous years. It's a decision that has surprised independent Russian newspaper 'Novaya Gazeta.' 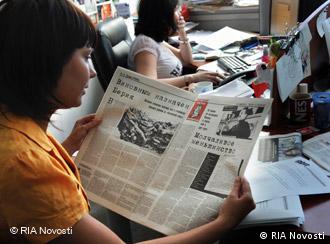 Press freedom has not really improved in Russia, editors say

"Novaya Gazeta," under close observation by Russia's state-run media control authority, is at risk of being shut down. Six months ago, editors received a first warning; a second reprimand could result in a withdrawal of the newspaper's license.

The paper is a symbol for investigative journalism in Russia. Its authors stand up for human rights and freedom of expression. Some have lost their lives in the process, among them Anna Politkovskaya, who was critical of Russia's actions in Chechnya, and human rights activist Natalya Estemirova.

In an article entitled "Gang, agency, party: Who are the legal nationalists?" the Moscow paper reported on the structure and secretive activities of right-wing extremists, using quotes from the group's websites. Media control authorities regarded the article as propaganda and handed the paper a reprimand. 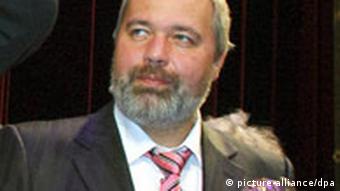 The paper's editors took the matter to court, where a judge only confirmed the warning.

Editor-in-chief Dmitry Muratov says the ruling is absurd: "All we did in the article was quote the fascists. And we were the ones to get the reprimand, not them. That is incredible!"

But the reprimand can still be repealed, according to Mikhail Fedotov, the former chief of the Russian Journalists Federation and current head of the Human Rights Council, a government body.

Fedotov took up the position earlier this month after his predecessor, human rights activist Ella Pamfilova, resigned in protest against the enhanced powers granted the Russian secret service, FSB.

"Novaya Gazeta" could take the matter to Russia's top court, which had clearly defined what constitutes misuse of press freedom, Fedotov He added that the court had made clear that it would not single out individual words or quotes but view them in context. 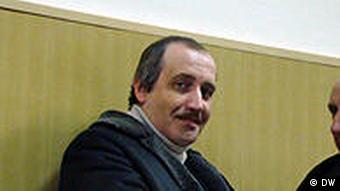 Russia has a long way to go in terms of press freedom, says Sokolov

"By taking the matter to court, we've merely been defended ourselves, but we've never submitted to self-censorship - and we never will," he said.

"Russia would not have improved its ranking by 13 slots in this year's freedom index by Reporters Without Borders if the 'Novaya Gazeta' incident had happened earlier," Fedotov said.

The press watchdog annually ranks countries according to their respect for press freedom, and Russia this year scored 140th position up from last year's 153rd.

There has been no real improvement in Russia concerning freedom of the press, said Sokolov. "It's not Russia that has improved, the countries that we surpassed in the ranking have changed for the worse," he said.

Jamming of DW is part of Ethiopia's campaign against press freedom

Coinciding with Ethiopia's parliamentary election last Sunday, DW's Amharic service in the country was deliberately jammed. It is part of the government's strategy to silence independent media. (28.05.2010)

More and more countries are censoring what their citizens can access on the internet. On the third annual 'world day against cyber censorship' Reporters without Borders has again warned of growing surveillance. (12.03.2010)