Deportations from the Aegean islands to Turkey have stalled as migrants apply for asylum in Greece to avoid being sent back to Turkey. Some 200 migrants are expected to be deported to Turkey on Wednesday. 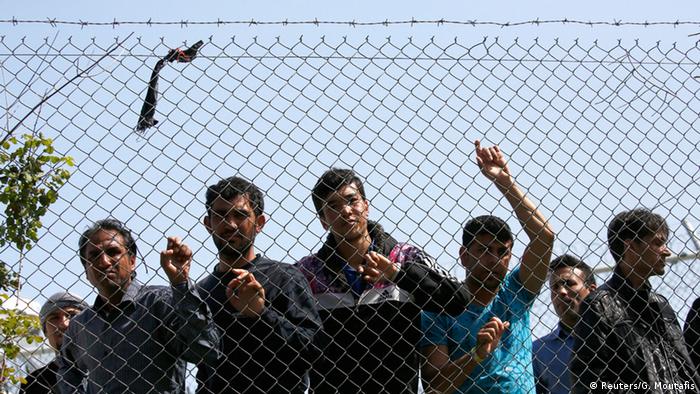 Many migrants who arrived after the EU-Turkey deal went into effect have applied for asylum in Greece in order to avoid imminent deportation, Greek authorities said Tuesday, slowing down deportation of migrants back to Turkey only a day after it started.

Yiorgos Kyritsis, the spokesman for Greece's migration body, said deportations from the Aegean islands of Lesbos and Chios have been slowed down "by an increase in asylum requests" over the past few days.

European Parliament President Martin Schulz has said the deal with Turkey over the refugee crisis must not allow concessions over human rights. Schulz criticized Ankara over its reaction to a satirical German video. (03.04.2016)

Under last month's deal between the EU and Turkey, irregular migrants who arrived to Greece after March 20 and did not apply for asylum are to be deported back to Turkey, although each case is supposed to be dealt with individually.

The first boat carrying some 200 mostly Afghan and Pakistani migrants with no chance of asylum in Europe left the Aegean islands to Turkey on Monday. Those migrants were taken to a reception center in Kirklareli near the border with Bulgaria, where their cases will be evaluated ahead of likely deportation to their home countries.

No deportations are planned from Greece to Turkey for Tuesday, although Turkish officials expected another boat of about 200 migrants to arrive on Wednesday.

Since March 20, Greek authorities have registered some 6,000 migrant arrivals by sea, out of which more than 2,300 had applied for asylum, Kyritsis said.

Previously, most migrants landing in Greece, many without papers, refrained from registering for asylum in Greece to avoid resettlement there in hopes of making their way through the Balkans to richer northern European countries. With the so-called Balkan route closed that option is all but sealed.

By applying for asylum in Greece, some migrants have effectively stalled their deportation. The director of Greece's Asylum Service, Maria Stavropoulou, told state television on Tuesday that it typically takes three months to process an asylum application.

She added that the applications of those in reception centers would be processed "considerably faster."

"There will be a difficult few months ahead," Stavropoulos said. "We are dealing with people who speak 70 different languages, and many have traveled to Greece without papers because they are escaping war."

Greece is straining under the dual pressure of the financial and migrant crises. EU states plan to send translator and asylum expert help, but so far only 30 out of 400 migration officers have arrived in Greece, Stavropoulou said. Locally hired staff, meanwhile, would take several months to train.

Under the controversial EU-Turkey deal, for every Syrian Turkey takes back from Greece the EU will accept one Syrian from Turkey, a number capped at 72,000.

A part of the deal and an agreement with Greece commits Turkey to taking back so-called economic migrants and those from safe countries.

The deal has been criticized by human rights organizations and the UN, who have dubbed it morally flawed, called it illegal and questioned Turkey's status as a safe country.

The deal is intended to stop the disorderly rush of migrants to Europe by encouraging Syrian refugees to stay in Turkey and seek direct placement in the EU, while also filtering genuine asylum seekers from economic migrants and those from countries considered safe.