Migrant deportees arrive in Turkey amid local anxiety | Europe| News and current affairs from around the continent | DW | 04.04.2016

Residents worry their Turkish seaside town will be overrun as the first migrants deported from Greece arrive on their shores. Their anxiety appears to be unfounded for now. Anna Lekas Miller reports from Dikili, Turkey. 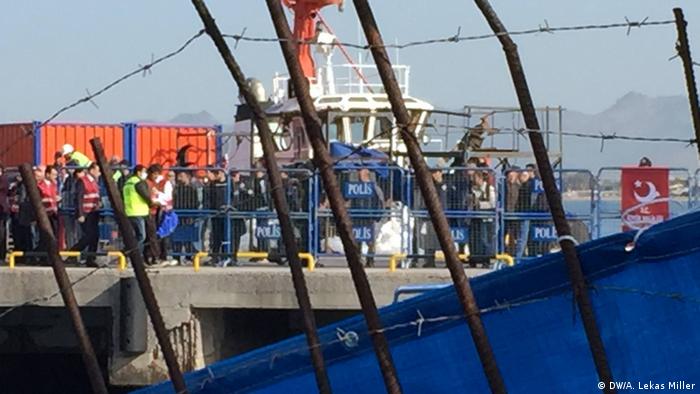 A cool morning breeze blows over the harbor, just after sunrise in the Aegean port town of Dikili.

On the horizon, a boat makes its way towards the harbor - not an unusual occurrence for the small town around 120 kilometers (75 miles) north of Izmir. However, this is not the ordinary passenger ferry that connects the Turkish coastal town with the nearby Greek island of Lesbos. It is the first of three boats carrying the first 63 refugees of 202 refugees and migrants who will be deported from Greece to Turkey under the EU-Turkey deal implemented on Monday.

In preparation for the arrival of the ferries, local police barricaded the harbor and directed a water cannon at the ships. As local and international press clambered to photograph the first migrants, the Turkish authorities placed tarps over the boats and erected barricades, blocking most of the scene from view.

After the first ferry arrived, passengers - mostly men of Bangladeshi, Pakistani and Afghan origin - disembarked one by one, each escorted by either a Frontex or a Turkish police officer, before quickly being placed on a bus and escorted by a police convoy out of the harbor. Neither international nor local media were permitted to speak with the migrants.

Putting the deal into practice

Finalized on March 18, the agreement stipulates that the European Union will give a legal route to asylum for a number of Syrian refugees, as long as an equal number of Syrians who arrived illegally are deported back to Turkey. Those who arrived after March 20 and either did not apply for asylum in Greece, or applied and were rejected, are in danger of being in the group sent back to Turkey.

"These returns are very concerning," Andrew Gardner, a Turkey researcher at Amnesty International told DW, commenting on the process of selecting refugees and migrants for deportation.

"There has been no external scrutiny of this procedure, and there are many questions about its legitimacy and effectiveness."

Another question raised is how the deal will affect non-Syrian refugees and migrants attempting to travel to Europe. While the first group of 16 Syrians granted legal asylum landed in Germany Monday morning, the majority of those deported on Monday were not from Syria. 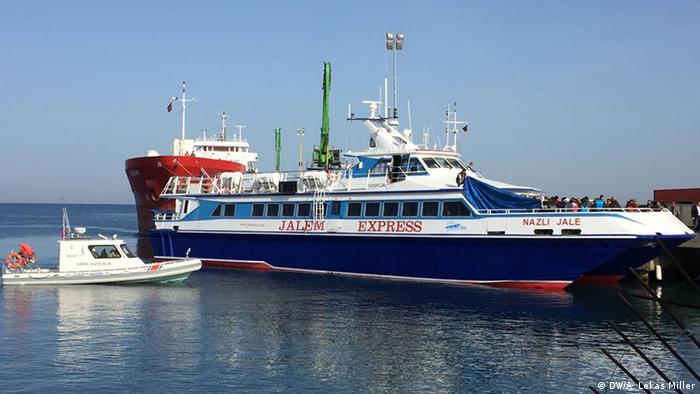 The Turkish authorities kept journalists far away from the new arrivals

"There is a non-Syrian refugee dimension to this deal," Sinan Ulgen, a visiting scholar at the Carnegie Europe in Brussels, told DW.

"Turkey will need to implement the Readmission Agreement with Europe, which means that it will have to take back illegal migrants from Europe who do not have refugee status," he continued.

"Turkey will be the buffer zone for an increased number of such distressed people."

Over the weekend, local residents protested the deal and the potential influx of migrants into the town of approximately 35,000 residents, which is far more accustomed to welcoming summer holidaymakers than war-weary refugees and migrants.

"We cannot have them come to Dikili, we cannot handle it," said Ozlem, a manager at a nearby hotel, speaking to his anxiety about the potential influx of migrants to the small, traditionally tourist-friendly town.

"If the town is filled with those people, tourism will disappear," he continues, widening his eyes and snapping his fingers.

Despite the vocal contingent of local resentment, which has been expressed in the protests and in anti-refugee posters put up around the town, a few local activists came to the harbor around the time the ferries carrying the migrants arrived on Monday morning, carrying signs that said, "Turkey is your home" and "Stop Deportations! Open Borders Now!"

Where will they go now?

In spite of locals' anxiety, it appears that, at least for now, migrants will only arrive in Dikili before being transferred to other locations, depending on their nationality. The migrants who arrived Monday morning were placed on buses almost immediately and then escorted by police to "removal centers" in Kirklareli, near the Turkish city of Edirne along the Turkish-Bulgarian border.

Once they arrive, Syrian deportees with legal status in Turkey will be able to stay in the region where they were originally registered with "temporary protection status." However, those without papers will be brought to the high security Osmaniye detention facility, near the Syrian border, which, in recent months, has become notorious for imprisoning Syrians - including migrants - before deporting them back to Syria.

The European Union will not be able to successfully implement its refugee agreement with Turkey by Monday. And the deportations called for are just irresponsible, DW's Bernd Riegert writes. (02.04.2016)

Some 750 migrants are to be shipped from Greece back to Turkey on Monday at the start of the EU-Turkey relocation deal, says the Greek state news agency ANA. One of two Turkish reception sites is still a barren field. (02.04.2016)