The European Union will not be able to successfully implement its refugee agreement with Turkey by Monday. And the deportations called for are just irresponsible, DW's Bernd Riegert writes. 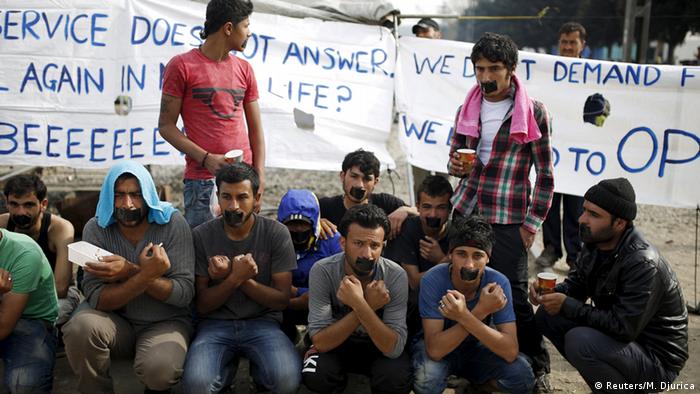 I would love to write about the smooth implementation of the European Union's refugee deal with Turkey. Unfortunately, that's not something that will be possible for a while. In the final hours before the deportation of refugees from Greece to Turkey is scheduled to begin, it remains unclear whether this agreement is even legal - not to mention how it might be implemented.

On March 18, EU heads of state and government concluded a deal with Turkish Prime Minister Ahmet Davutoglu to finally seal the pathway to fortress Europe. The pact, which aims to secure the maritime border between Turkey and Greece, requires that Greece implement a fair asylum process in the span of a few days - something that the country has been unable to accomplish for years. Additionally, the deal requires that Turkey ensure that refugees sent to the country after their asylum applications are rejected enjoy the rights afforded to them by the Geneva convention on refugees, in line with international law. On top of all this, EU member states plan to send thousands of civil servants to Greece and Turkey to ensure that peace and order prevail during the process. Very little of this has happened so far.

A last-minute miracle needs to occur. EU diplomats are in hectic negotiations in Turkey. The European Commission is holding tight to its goal of beginning the transport of refugees from Lesbos to Turkey on Monday. Functionaries are under immense pressure to deliver the deportations.

The UN refugee agency considers the plans for a rapid processing of deportations, possible mass deportations and a potential deportation prison legally questionable. This has not had an effect on the European Union's plans. Whatever doesn't fit will be made to fit.

How Turkey deals with refugees from Syria, Iraq and Afghanistan is something the decision-makers in Brussels don't want to know. At their summit on refugees, they decided that the problem should be passed on to someone else. And that's what they've done.

The thousands of promised EU personnel have not been sent; only 70 additional civil servants from across the European Union are in Greece to work at the moment. It appears that only the European Commission knows how the refugees slated for deportation will be afforded legal proceedings in line with EU standards - and the commission is letting no one in on its secret.

There are an estimated 8,000 people on the Greek islands slated for deportation to Turkey. More arrive on boats every day, though fewer have opted for the Aegean route since the deal was inked. Now, the number of people risking the more dangerous passage to Libya and across the Mediterranean to Italy has increased. The relief that EU heads of state felt after washing their hands of the humanitarian catastrophe and passing it on to Turkey could soon fade as refugees choose other routes to the European Union. The UN refugee agency has continually warned that the EU will not remain sealed off in the long term.

The European Union has declared that the return of refugees and the direct resettlement within the EU of those rare and lucky refugees imported directly from Turkey is the largest logistical operation that the bloc has ever undertaken. It is threatening to become a flop. The European Commission and Turkey should pull the emergency brake - or at least delay its implementation. April 4 is not achievable. There might be a bit of official embarrassment if the plan is pushed back by a week or two or three, but that would be better than the rushed implementation of a plan that is humanly impossible and legally questionable.

For the 50,000 people who are stuck in Greece at the now-sealed border with Macedonia, and to whom the pact does not apply, there is no solution in sight. It is a scandal, and the rest of the European Union has chosen to look away. Refugees who do not arrive directly in Austria, France or Germany are no longer of interest to those countries. It's something for Greece alone to deal with. So much for European solidarity.

US Pentagon planning Ukraine command in Germany: Report 19m ago

Burkina Faso: 'Internal crisis' in army as gunfire heard near presidency 3h ago