Police presence in the eastern German city has been boosted following Monday's blasts at a mosque and convention center. The attack came less than a week before celebrations take place to mark Germany's reunification. 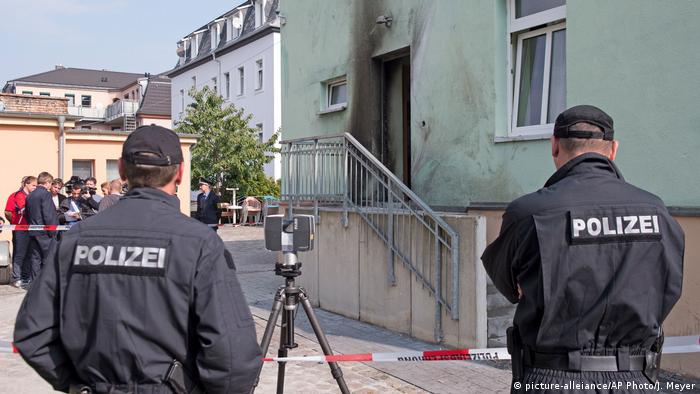 Security will also be boosted for the Day of German Unity celebrations, which are due to be held in the city on October 3 with German President Joachim Gauck and Chancellor Angela Merkel in attendance, officials said.

"We have now switched to crisis mode," said Dresden police chief Horst Kretzschmar, adding that no one had claimed responsibility for the blasts.

On Monday evening, two small bombs detonated in front of a mosque and a convention center, which was due to play host to the 26th anniversary reunification commemorations.

The first blast occurred at 9:53 pm local time (1953 UTC), outside a mosque in the eastern neighborhood of Cotta. An imam was inside the building at the time, along with his wife and two children.

About half an hour later, a second explosion was heard outside the International Congress Center, forcing police to evacuate the nearby Maritim Hotel.

According to German media, both buildings were damaged but no one was injured.

The blasts also coincided with a ceremony in Berlin to mark the tenth anniversary of the German Islam Conference, a forum to improve dialogue between the government and Muslim communities.

Dresden has come under criticism for far-right politics and xenophobia in recent years, beginning with the anti-Islamization PEGIDA movement founded in the city in October 2014. Monday's bombings came just after PEGIDA staged its latest march through the city.

The state of Saxony has also been the scene of several violent clashes outside refugee shelters.

Germany's self-styled "anti-Islamization" movement PEGIDA is descending into chaos as internal divisions have resulted in conflicting demonstrations. Meanwhile, its founder Lutz Bachmann is moving to a Spanish island. (27.09.2016)

The two bombs targeted a mosque and an interational convention center. The explosions came just hours after the latest anti-Islam PEGIDA march. (27.09.2016)