Security Council Reform: Where It Stands | Germany | News and in-depth reporting from Berlin and beyond | DW | 18.06.2005

Security Council Reform: Where It Stands

The so-called Group of Four nations -- Germany, India, Japan and Brazil -- are pushing ahead for permanent seats on the UN Security Council. But opinions differ among other nations on reform of the world body. 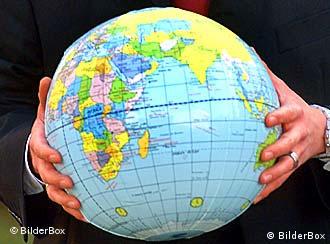 Changing the shape of global representation

Moves to expand the United Nations Security Council have been going on for more than a decade, and many nations say the current make-up, which represents the global balance of power after World War II, is anachronistic and doesn't reflect today's realities.

But actually putting a reform plan into place for the powerful council has proven difficult, and the process has only gained momentum this year since Secretary-General Kofi Annan made it part of his overall reform of the world body.

The council now has 15 members, 10 of which rotate in for two-year terms, and five permanent members -- the United States, China, Britain, France and Russia -- which have veto power. A proposal put forth by the Group of Four (G-4) calls for expanding the council to 25 members, with six additional permanent seats, including two from Africa, and four non-permanent ones. 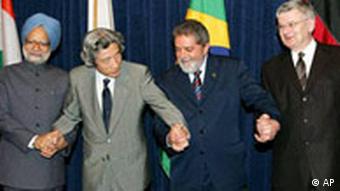 The G-4 nations have been lobbying hard for a vote that they hope will take place in June. In order for their reform plan to go ahead, they will need the support of at least two-thirds of the 191-member General Assembly. If that support comes, another vote would be held to select new members. Should that resolution pass, a change in the UN Charter would be necessary, which would have to be approved by national legislatures.

The June vote, however, is looking like it could slip into July, which has some analysts saying that could mean the G-4 will not be able to muster the support they need.

The United States and Russia have said they support Japan's bid for a permanent seat, but have not taken a position on the other three. US President George W. Bush and Russian President Vladimir Putin discussed UN reform during a phone call on Wednesday.

The White House spokesman said the presidents agreed that the goal of Security Council reform should be to make the council more effective. He added that it is important to build a broad consensus on the way forward.

Outlining for the first time the US position on the council's expansion, Undersecretary of State Nicholas Burns said Thursday it "will likely support adding two or so permanent members" and "two or three" additional non-permanent seats to the council.

Only one of four

Aside from Japan, he did not indicate a US preference for new membership. Earlier in the month, Secretary of State Condoleezza Rice stated similiar goals during a meeting with German Foreign Minister Joschka Fischer, stressing that Washington was not ready to endorse the other three.

That is a prospect Japan said it would not support. "America made a proposal but Japan cannot go along with it," Prime Minister Junichiro Koizumi told reporters on Friday. He said Japan was determined not to break up a joint bid with the Group of Four.

Meanwhile, China has stepped up its opposition to what it calls "hasty" UN reform. 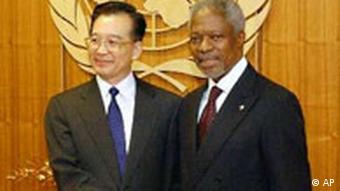 Earlier this month, China said it would block any move to give the G-4 permanent seats, a threat that it could carry out since it holds veto power on the current council.

China has said it wants increased representation by developing countries on the council and State Councillor Tang Jiaxuan said the purpose of any reform must be to strengthen rather than weaken the UN.

"It will inevitably intensify the conflict among many countries if an immature plan is put to the vote or adopted," he said at a meeting of the Chinese-Arab Cooperation Forum in Beijing.

Some observers have also hinted that India might be Washington's top choice for a second permanent seat. That would mean not a single African or South American state is represented on the Security Council, an option that would likely inflame a good portion of the General Assembly.

France and Britain, who are also permanent members, have said they back the four contenders. Italy, which does not have a permanent seat but as a member of the European Union has a vested interest in the EU's representation on the UN's highest body, has lobbied against Germany's inclusion and in favor of a single seat for Europe and more input by developing countries.

Other regional rivalries that have spilled over into the Security Council debate include Pakistan and India. Pakistan opposes India's having a seat and has said if the General Assembly ever votes on the expansion plans, "they'll lose" based on the large contingent of Muslim states that would oppose India.

Secretary-General Annan has said he thinks Security Council enlargement should take place before the world summit in September, where participants are scheduled to adopt an ambitious reform program on the UN's 60th anniversary.

The G4 states agree. "For some 40 years the make up of the Securtiy Council has not changed," said Germany's Fischer. "It is now high time, to change it to reflect the new world order. Together with Brazil, India and Japan, Germany is ready to take on more responsibility for the security in the world."

Washington has thrown a wrench into Berlin’s aspirations of becoming a permanent member of the UN Security Council, arguing that the expansion of the body is not its top reform priority. (June 9, 2005)

Kofi Annan's ambitious reform plans for the United Nations have met with a largely positive response in Europe. Germany feels it's inched closer to reaching its goal of a permanent seat on the UN Security Council. (March 22, 2005)

Germany, together with India, Japan and Brazil, has started circulating a draft UN motion calling for an enlargement of the UN Security Council. The US and China are showing signs of resistance. (May 17, 2005)