Seconds out for Apple, Samsung in smartphone frenzy | Business| Economy and finance news from a German perspective | DW | 12.09.2017

Seconds out for Apple, Samsung in smartphone frenzy

Apple has unveiled a new lineup of iPhones with a number of improvements on previous models. A special anniversary edition is even smarter, but its high price tag is bound to put off many customers. 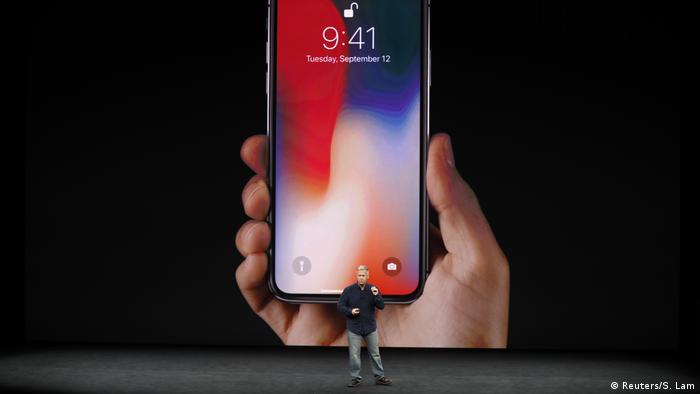 Apple on Tuesday said its new iPhone 8 and iPhone 8 Plus boasted camera, display and speaker improvements reflected in a higher starting price of $699 (584 euros) and $799 respectively. It added that both phones now allowed wireless charging.

A special anniversary edition called iPhone X (displayed in the picture) would have all the new features of the iPhone 8 models plus face recognition technology to unlock the phone (Face ID), the company said during a presentation. Analysts expected the X model to cost around $1,000.

The announcement came some 10 years after the company's late co-founder, Steve Jobs, introduced the first iPhone and with it set the stage for mobile computing.

The companies associated with supplying the guts of Apple's smartphone technology had been on the rise in trading ahead of the Cupertino product launch. Among the firms seeing their share value rise were Cirrus Logic, Western Digital, Micron Technology and Texas Instruments.

But competition looks set to remain fierce in the smartphone business, also in the high-end segment as the US tech giant's main rivals have not been resting on the laurels either.

At a news conference by competitor Samsung earlier on Tuesday, the South Koreans announced the Galaxy Note 8 smartphone to domestic media.

Samsung said market response to the Note 8 had beaten its expectations even though its price was higher than past models, and even though the Note brand's reputation had taken a hit from its previous model. The disgraced Note 7 phone was recalled twice and discontinued after it spontaneously overheated or caught fire.

The company received 650,000 pre-orders for the Note 8 before its Friday launch. It's the most expensive smartphone Samsung has released so far.