Scorpions: 'Too much fun to quit now'

The most successful German rockers of all time have sold more than 100 million records and given thousands of concerts. They expected to be done in 2012, but things turned out differently. 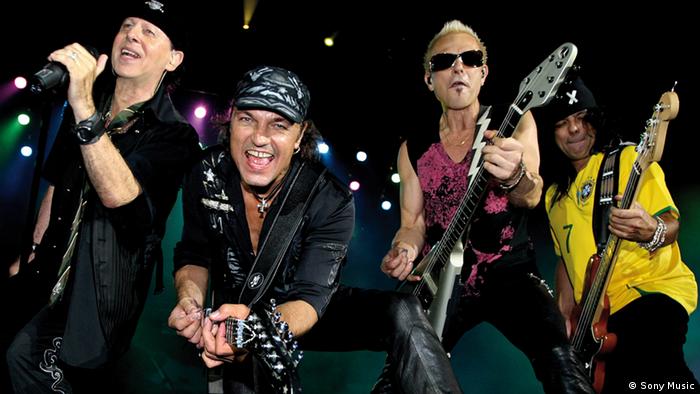 In this interview, singer Klaus Meine, guitarist Rudolf Schenker and lead guitarist Matthias Jabs talk about saying farewell to the farewell, the challenges of unplugged concerts, the band's upcoming 50th anniversary, the DW documentary film "Forever and a Day" and the album they're currently working on.

DW: In 2010, you announced you would end your career together after a three-year farewell tour. In early 2013 came the decision to keep going. Why?

Klaus Meine: When you start a three-year farewell tour, you know you've got a long time ahead of you. But that long period went by much faster than we imagined. The closer we got to the goal - Munich in December 2012 - the stronger the feeling was that we hadn't come to the end at all. There were so many images in our minds and so many emotions in our hearts. Everything we experienced between 2010 and 2012, the 200 concerts - it was all so powerful. You stand on stage, look down and see so many fans - including the younger generation, who are really getting into it and saying: 'Guys, this is so cool. We're seeing you for the first time. When will you be back?' It's so motivating and inspiring to play for three generations. We're all having too much fun to put down the guitars.

Rudolf Schenker: The success of the farewell tour bowled us over. When you see you've got a whole new generation in front of you - lots of 18-, 19- and 20-year-olds - then you get a whole new kick out of it. Essentially, we announced the farewell tour because we didn't want to be standing on stage and not able to deliver what people expected from us. 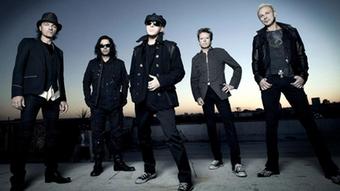 The Scorpions celebrate their 50th anniversary in 2015

Matthias Jabs: At first, there were plenty of arguments in favor of stopping. But we were quickly overshadowed by the feeling of how much fun it all is. It doesn't matter where we went, the shows were packed - in South America, the US, throughout Europe. So, we just thought: This can't really be the end.

Then came the offer to play an MTV Unplugged concert in Athens, which would later be put out on CD and DVD. What does the Unplugged series mean to you?

Klaus Meine: It was early 2013 when we got the MTV Unplugged offer. That really brought out the thrill of the chase in us, and we said: 'MTV Unplugged? Are we supposed to say: too bad, but we just quit? Of course not.' So, we all quickly agreed that it was the next challenge. MTV Unplugged really is a brand, even if MTV is no longer what it was during its 80s glory days. But there's a really strong story there. Really the best musicians in the world have participated, and you want to be part of MTV Unplugged history. So, for us, that was an invitation we really couldn't turn down and accepted with total passion.

What's the challenge when it comes to MTV Unplugged?

Matthias Jabs: The acoustic guitar is completely unforgiving. You have to play with much greater concentration and precision. With an electric guitar, particularly with some distortion, you can just go at it, and the sound lingers. But with acoustic guitar, every note has to be played at the right time. That just makes it tougher.

What role does social media play for you?

Klaus Meine: For a live band as globally present as Scorpions, the internet has become an ally - in the sense that people can watch songs on YouTube after almost every concert. Then young people see them and say: When Scorpions come to my country, I want to go check it out with my friends because it's definitely full-service rock'n'roll, and we'll have a good time. Then they leave the concert and talk about having seen it and how cool it was - that it wasn't just some old man rock combo on tour, but a band whose music really spoke to them. 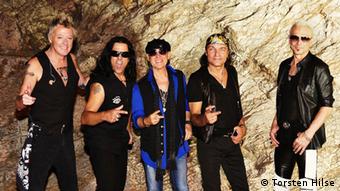 The band sees its MTV Unplugged gig as a major honor

Next year, you'll celebrate 50 years of Scorpions. What are you planning for the anniversary?

Klaus Meine: In 2015, when we celebrate - and it's almost hard to say it - the 50th anniversary, then of course we'll want to put out a strong album. We've been in studio the last few weeks, continuing with what we started in 2011. We're calling the project "Outtakes." We've gone back and listened to songs from the 80s, going through our archives, opening all the drawers. We found a lot of material - many tracks we never released, including some we didn't finish composing. There were also drafts of lyrics, and I sat back down and wrote new ones. There was a gem or two in there. The album will also have new material - songs we're putting together now. It's a really exciting project.

What's the latest on the documentary film "Forever and a Day" that DW and German broadcaster ZDF commissioned from director Katja von Garnier?

Klaus Meine: It'll also be released in 2015. A camera team followed us around the world in recent years - in Bangkok, Berlin, Munich, Paris, Los Angeles and Moscow. Recently, we had a screening of the final version of the film. It was really crazy because there's so much material we couldn't even remember, like Scorpions on tour with the old band bus in the early 70s. There are so many pictures there that no one but us has seen. I think it'll be a really special film for our fans.

Germany's most successful rock band joins the ranks of artists to record a gig for the classic MTV Unplugged series. For their live set, Scorpions came up with a totally new concept. (03.12.2013)

Now that Germany's legendary rock festival is switching venues, a dispute has emerged over who can lay claim to its name. A court has ruled that the brand name "Rock am Ring" is not protected. (02.07.2014)

More of the Scorpions here in a live performance