Clashes have broken out at the Al-Aqsa mosque complex. At least 152 people have been wounded, medics said. The complex is a frequent flashpoint. 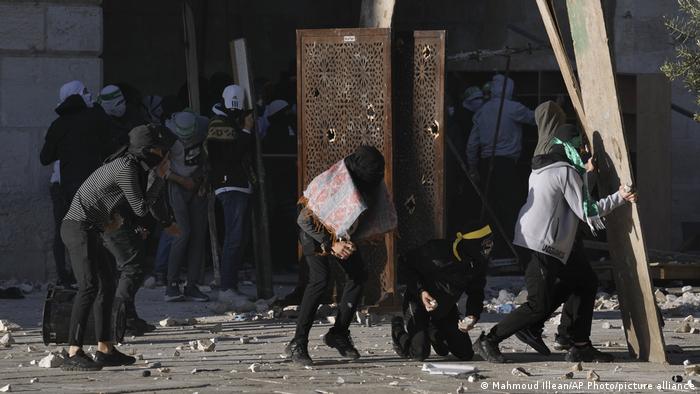 Scores of people were hurt after clashes broke out between Israeli police forces and Palestinians at the Al-Aqsa mosque complex in East Jerusalem on Friday morning.

Clashes came as Muslims celebrated the holy month of Ramadan, while Jews around the world were set to mark the beginning of Passover on Friday evening.

Christians will also celebrate Easter on Sunday, marking a time when Jerusalem, which has sites sacred to all three religions, is expecting an influx of people from all over the world.

The Palestinian Red Crescent emergency services said at least 152 Palestinians were injured by stun grenades and beaten with batons.

What happened on Friday morning?

Israeli police said they were "forced to enter the grounds to disperse the crowd and remove the stones and rocks, in order to prevent further violence."

Police said they did not enter the mosque itself.

Israeli police said its officers were wounded from "massive stone-throwing" at the complex and two officers had been evacuated from the premises for treatment.

Around 400 people were arrested, the Palestinian Prisoner's Club said.

The mosque was later re-opened, and some 60,000 people attended the main Friday prayers, according to the Waqf, the Islamic endowment that administers the site.

Germany, France, Italy and Spain condemned the violence in a joint statement.

"We call on all sides to exercise maximum restraint as well as to refrain from violence and from all forms of provocation," spokespersons for the countries' foreign ministries said.

US State Department spokesperson Ned Price called for the easing of tensions and urged all sides to exercise restraint.

"We call on all sides to exercise restraint, avoid provocative actions and rhetoric, and preserve the historic status quo on the Haram al-Sharif/Temple Mount," Price said.

UN Middle East envoy Tor Wennesland echoed the statement, urging all sides to "help calm the situation, avoid spreading inflammatory rhetoric and speak up against those seeking to escalate the situation."

Why violence at Al-Aqsa is particularly sensitive

Palestinians view the Al-Aqsa mosque site as a symbol of their struggle for a state and view any large-scale deployment of police there as a major provocation.

Clashes in Jerusalem during Ramadan last year, including at the Al-Aqsa mosque, led to an 11-day conflict between Israel and Hamas, a militant Palestinian group that rules the Gaza strip.

Both Israel and Jordan stepped up talks before Ramadan this year in order to avoid similar violence.