Scorching criticism of the Brazilian government | World | Breaking news and perspectives from around the globe | DW | 21.06.2013

Scorching criticism of the Brazilian government

The protests against a rise in bus fares have grown into overall criticism against the power of government. Brazilians are fed up with their politicians - also because of their role in bringing the World Cup to Brazil. 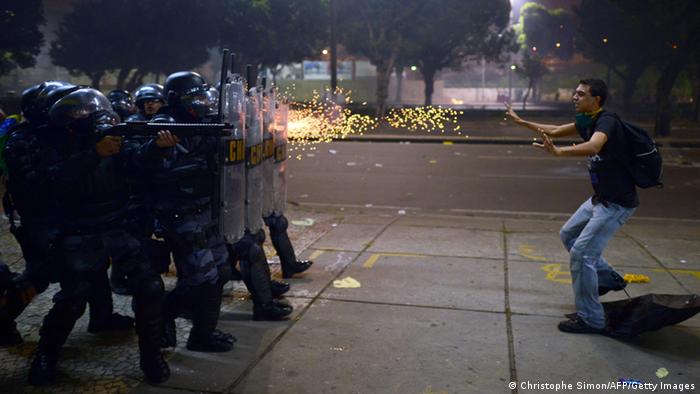 Brazil is hosting the Confederations Cup through June 30 - an event that is supposed to give a taste of the upcoming World Cup 2014 in the soccer-crazed nation. The world federation FIFA's president Sepp Blatter appears to assume that the sport bridges all conflict, telling a local newspaper that soccer was "stronger than the dissatisfaction of people."

But the ball has been rolling in the Confederations Cup for several days now and Brazil is still seeing the largest demonstrations in the last 20 years. Now, the national team has joined the ranks of the people, expressing its solidarity with the protestors.

"Let us march together, Brazil," tweeted defender Dante. "I love my people and will always support you."

Hundreds of thousands of Brazilians have taken to the streets for over a week, particularly in the streets of the country's most important cities, Brasília, São Paulo and Rio de Janeiro. What started out as resentment about a 20 centavo (7 euro cents) price hike in public transport has turned into much more.

"Every protestor has his own reasons," said Marcelo Feller. The attorney from São Paulo has a close affinity to his fellow Brazilians. Feller is one of 1,800 other attorneys across the country offering free defense to peaceful demonstrators who have been arrested. 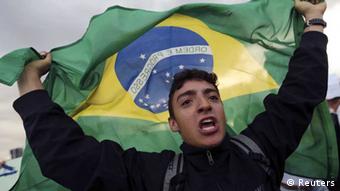 Brazilians are demanding the motto of their flag: "Order and Progress"

"The masses that are now mobilizing are protesting against the high cost of living, corruption and government mismanagement - especially in the run-up to the Copa," he said.

The sociologist Cândido Grzybowski confirms this assessment. "It's especially young people - not the very poor, not the extremely rich, but everyone in between," he said. People who work, study or do both. Grzybowski is the director of the renowned Brazilian Institute of Social and Economic Analyses (Ibase) in the center of Rio de Janeiro. The demonstrations are taking place directly in front of his office building. From his window he saw a sign reading "Should I now send my children to school in the Maracanã?" - a reference to the famous Rio stadium that for half a century was one of the temples of global soccer.

For Grzybowski, that sentiment is emblematic of the situation. In the eyes of many Brazilians, much too much money has been poured into renovating the stadiums and much too little into education.

The Maracanã in Rio de Janeiro is the largest stadium in the country and is hosting the final games of both the Confederation Cup and the World Cup in 2014. Initially, the reconstruction was supposed to cost 230 million euros ($308 million). It ended up with a price tag of 360 million euros, after already having undergone two facelifts in the past 15 years for a total of 220 million euros. 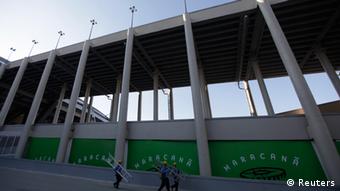 Millions were spent to revamp the Maracanã in Rio de Janeiro

Enormous sums of money have been flowing in connection with Copa preparations. In May, the state of Rio de Janeiro granted a 65-million-euro contract to a multinational consortium to run Maracanã for the next 35 years. The consortium includes Brazilian construction conglomerate Odebrecht and the sports and entertainment company IMX, which is owned by Brazilian billionaire Eike Batista. The deal also includes the modernization of the adjacent sports park for 200 million euros.

It is precisely these types of deals that have left many wondering whether the public sector is actually in a position to best represent the interests of the people. Against this backdrop, a law is being debated that plans to cut the competencies of the public prosecution. Investigations into cases of corruption would in future be handled by the police - seen as corrupt themselves.

During the economic upswing over the past 15 years, large parts of Brazil's population managed to escape from extreme poverty. Hardly anyone goes hungry anymore, unemployment rates are still at an historic low of under six percent. But inflation makes it very hard for many people to maintain their standard of living. Food doesn't cost less than in European countries such as Germany - in some cases, it is even more expensive. A kilo of tomatoes goes for about four euros. In Germany, you could buy high-quality organic tomatoes for that price. 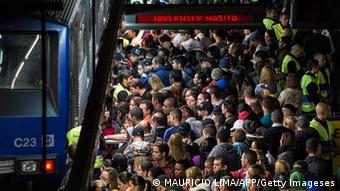 The chances of climbing the social ladder are limited. "Social policies in part bypass the needs of the people," Grzybowski said. There are support schemes for housing, for example, where no one wants to live. On the other hand, the level of education in public schools is still very low and quality healthcare is only available to the wealthy. An additional problem has developed as more and more people take up regular jobs: every day, the public transport systems in the cities collapse.

When Brazil was awarded the 2014 World Cup, many people hoped for improvement in local public transportation. But while the stadium costs have increased from two to three billion euros, significant construction projects in the transportation sector have been tabled. From the originally earmarked 11 billions euros, only nine billion euros have ultimately gone toward infrastructure.

São Paulo attorney Feller would need nearly one-and-a-half hours to get to his workplace using buses and rail. With his car, it takes him 30 minutes to maneuver through the city's traffic-filled streets. In Rio de Janeiro, it's just as bad. "Some of our employees need twice as long to get to work than they did five years ago," said sociologist Grzybowski.

Repercussions for those in power?

Public transportation authorities have shown questionable timing by deciding to increase fares. But apparently enough is enough - Brazilians have taken to the streets and the authorities in Rio and São Paulo have since revoked the plans. But these protests are about more than just a rise in bus fares. 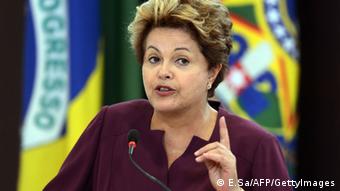 President Rousseff has shown solidarity with the protesters

"The protestors themselves say it has nothing to do with that," Grzybowski said. This is about all of the deficits the government cannot get a grip on.

"Until now, no one would get off the sofa for that," Feller said. "But now, Brazil has woken up." The last time that the people stood up en masse, they forced corrupt President Fernando Collor de Mello to step down. That was in 1992. Now, activists have collected several hundred thousand signatures against leader Dilma Rousseff over the internet platform Avaaz.

President Rousseff, however, has been praising the extent of the protests as evidence of the strength of Brazil's democracy. As opposed to her counterpart in Turkey, Prime Minister Recep Tayyip Erdogan, she has put herself on the side of the demonstrators. Both Grzybowski and Feller do not see any acute danger for Rousseff's political career. But they do not believe that the Brazilians will be pacified merely by her warm words.

Thousands of Brazilians rally against corruption

More than 240,000 people rallied in major Brazilian cities against corruption and the huge costs of hosting the 2014 World Cup. Riot police reacted with extreme violence. (19.06.2013)