Germany might not have thrilled in their 1-0 win against the US, but the return of Bastian Schweinsteiger was of note. The midfielder looked assured on the ball, and up for the fight when the US sought to shut him down. 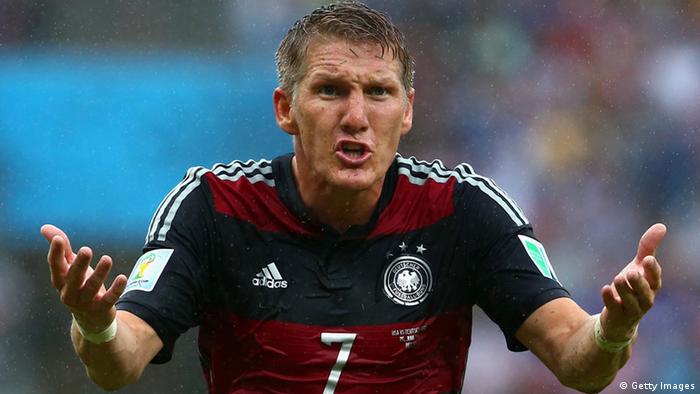 Although the return of Bastian Schweinsteiger in Germany's starting line-up might not have been a surprise, his performance was. Considering the injury-stricken end to a fine season, his performance against the US was brimming with the veteran confidence long lacking for the Bayern Munich legend.

Straight from the start, Schweinsteiger looked likely lively and keen to show the difference he makes from a safer Sami Khedira. Schweinsteiger worked superbly with Bayern teammates Toni Kroos and captain Philipp Lahm in a midfield three that is increasingly becoming Germany's trademark in Brazil. The middle of the park might have been too stagnant too often, but Schweinsteiger wasn't the guilty partner. He only misplaced two of his 59 passes in the first 45 minutes and had been at the heart of building Germany's few encouraging attacking moves.

The USA were aware of the effect Schweinsteiger was having on the midfield and were keen to disrupt the Bayern man's rhythm as often as possible. A few crunching tackles followed as Germany fans trembled over the state of Schweinsteiger's knees and ankles. A personal battle even evolved with former Schalke man Jermaine Jones. Despite being persistently tackled and harassed by the American midfielder, Schweinsteiger never wavered or shirked from the fight. 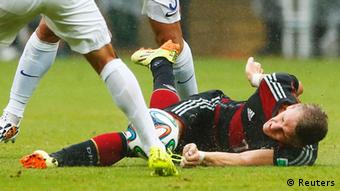 Schweinsteiger took a beating, but held up well and that is a good sign for Germany

By the time he came off, Schweinsteiger had registered a team high (at the time) of 102 touches and had won 12 duels. He was back to his formidable best, and in timely fashion too. Germany's form continues to develop alongside the variety of options that Löw has at his finger tips. It was also a reminder that despite being prone to a tactical mishap or two, Löw still knows his squad better than anyone.

"Our midfield was very strong in general, dominating the match and generating pressure," Löw said after the game when asked about the performance in particular of Schweinsteiger. "He was combative, at least until he ran out of energy, and was very good. He covered a lot of ground and also was the reason we were so well organized. For me, it was simply the right moment to give Sami Khedira a bit of a rest."

The decision to rest Khedira was a smart one, both in terms of squad management as well as tactically. The early pressure would have been too much for Khedira, who has been short of his best when pressed recently. Schweinsteiger though, is a veteran of dealing with midfield pressure and in a wet Recife, he proved that point once again with his best Germany performance in months. Whether Khedira returns or Schweinsteiger retains his starting spot for Germany's game in the last 16 will simply be down to how Löw wants to set up tactically, and not due to individual quality.