Schulz makes left turn in German election race against Merkel | Germany | News and in-depth reporting from Berlin and beyond | DW | 20.02.2017

SPD candidate Martin Schulz has proposed a roll-back of the signature labor reforms introduced by the last SPD chancellor, Gerhard Schröder. The move "opens the window wider" for a center-left coalition, some say. 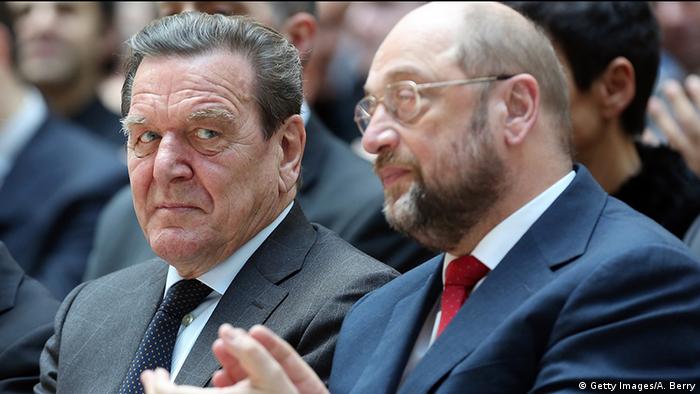 Everybody's happy in Germany's re-born center-left. "The fact that I make the SPD happy makes me happy," quipped Martin Schulz, the Social Democratic Party's (SPD) candidate in September's election, on Monday, commenting on the huge boost his candidacy has given the SPD in opinion polls.

The suddenly popular Schulz, previously president of the European Parliament, has now set out a new and significantly more left-wing agenda that potentially rolls back some of the labor market reforms introduced by SPD Chancellor Gerhard Schröder - collectively called "Agenda 2010."

Speaking to the mass circulation "Bild" newspaper, Schulz suggested that he was prepared to extend the payment of initial unemployment benefit in Germany beyond the current 12 months and introduce a new "solidarity" pension that ensured an ample living standard for anyone who had paid into the system for 35 years. Though details were lacking, SPD Labor Minister Andrea Nahles is expected to present a proposal to that effect in the next few weeks.

Schulz is also promising to reduce the number of limited hours contracts, extend worker participation in company appointments, as well as introduce better dismissal protections for workers who organize works council elections. The point of the measures was to show "respect for the life achievements of the people in our country," he told the DPA news agency during a trip to western city of Bielefeld.

All this would represent a significant correction of Agenda 2010, which Schröder first announced in 2003 as head of a SPD-Green coalition government. Central to the agenda was streamlining the social welfare system, which meant unifying social welfare and unemployment benefits, while at the same tightening the rules on work eligibility and making it easier for firms to lay people off.

The center-left SPD has been surging in polls since Martin Schulz announced he's running for chancellor, while Merkel's conservatives are losing support. A new poll shows growing SPD support particularly among one group. (13.02.2017)

Opposition parties at the time, chiefly the conservative Christian Democratic Union (CDU) and the business friendly Free Democratic Party (FDP), welcomed Agenda 2010, and Schröder's successor, Angela Merkel, praised him for what she called the "courageous and determined" reforms.

But there was much consternation within the SPD itself, while in 2007 the German Institute for Economic Research (DIW) came to the conclusion that over half of those affected by the reforms had lost income as a result, and that the proportion of those on benefits living in poverty had increased from around a half to two-thirds.

On the other hand, many politicians maintain that Agenda 2010 triggered Germany's increased growth in recent years. Indeed, one of Schröder's aims, reducing unemployment, was emphatically achieved - it fell from 11.7 percent in 2005, when the reforms were first introduced, to 6.3 percent this year. But several studies have shown that one of the reasons for this, the introduction of "mini-jobs"  - jobs for those on unemployment benefit paying a maximum of 450 euros ($475) a month - has meant more and more people in work are still dependent on the state.

Whether or not Agenda 2010 is to blame, there is no doubt that inequality in Germany is rising. Figures from a government report released in December showed that 4.17 million Germans - 6.1 percent of the population - are in debt, while pay in the low-wage sector has not kept pace with the national average. The number of homeless people in Germany went from 223,000 in 2008 to 335,000 in 2014. On top of that, some 5.6 percent of the population is now officially classified as poor, while the number of millionaires in the country has risen to 16,495 - up from 12,424 in 2009.

The opposition Left party, which has long called for Agenda 2010 to be reformed, reacted to Schulz's new tone with a mixture of approval and skepticism. The socialist party's candidate Sahra Wagenknecht said overturning the labor reforms was "overdue," but questioned why Schulz did not want to commit to the program before the election, given that the SPD, the Greens, and the Left party currently have a majority in the Bundestag anyway. 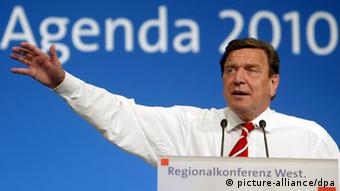 Schröder's reforms caused a rupture in the SPD

"Martin Schulz should not play a false game with the desire of large parts of the population for more socially just policies," Wagenknecht said, before once again calling on Schulz to rule out a coalition with the CDU after the next election. "All the experience of the last few years contradicts the idea that more social policies can be pursued in another grand coalition."

Left party leader Katja Kipping, meanwhile, suggested that Schulz's new line "opened the potential window wider" for a left-wing coalition to take over following September's election - though she warned Schulz not to expect a "blank check" from the Left.

The German Trade Union Confederation (DGB) also welcomed Schulz's comments: "It's the right approach to extend the period for claiming unemployment benefit," managing board member Annelie Buntenbach said in a statement emailed to DW. "People over 55 in particular must be protected. They barely have any chance [of finding employment again]. For many that leads to the contribution they made their whole lives being devalued in the period between the end of their work and the beginning of their pension."

Who is the new head of government? Social Democrat Olaf Scholz has a lot of experience with political top jobs, but lacks charisma. He has often been underestimated.