What can humans do to stop the global bee die-off? As the debate over the role of pesticides rages, urban beekeeping seems like a solution. Unfortunately, it's not that simple, as a German couple from Cologne found out. 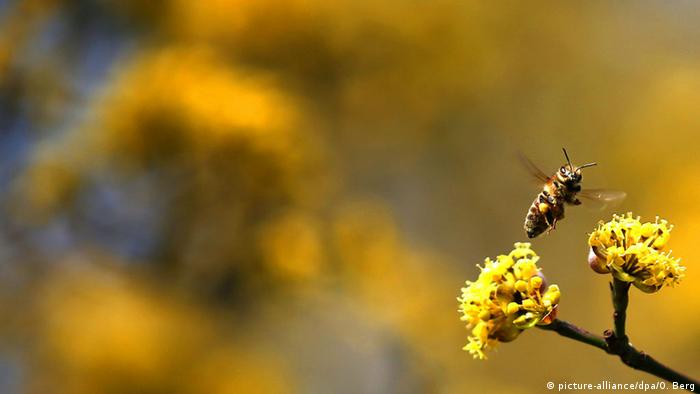 Jonas Schiffmann leans against his balcony's railing and smiles apologetically. Behind him, the blazing sun makes Ehrenfeld, a hip Cologne neighborhood, look shiny. Schiffmann is surrounded by self-sprouted tomato and strawberry seedlings - and a few hundred bees.

Some of the bees have landed on Schiffmann's hand, his shirt, his head. The 29-year-old winces slightly every time another one joins. "We thought it would be different," he says, referring to the bees. "They are supposed to be quieter, not even noticeable."

Yesterday, his bees arrived via overnight express, and moved into the wooden bee box on the balcony. Now, Jonas Schiffmann and his girlfriend Veronika Schrieder - who had no prior experience with bees - have become urban beekeepers.

The couple is not alone: Urban beekeeping is a growing trend. The company behind the bee box on Schiffmann's balcony increased sales by 140 percent - within a year. "Stadtbienen e.V." advertises beekeeping as simple and not time-consuming - the perfect hobby for an environmentally conscious city dweller. 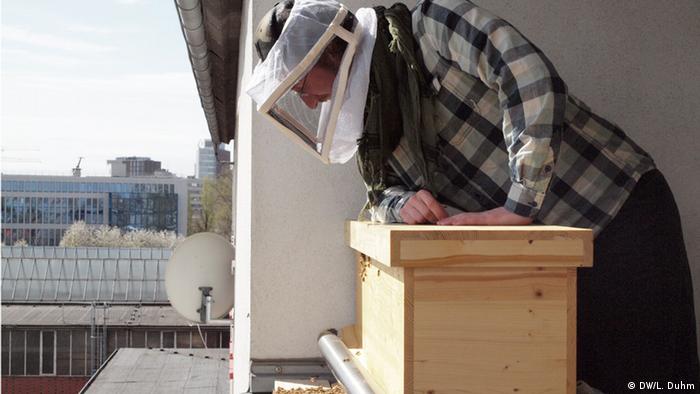 Jonas Schiffmann checks the bees on his Cologne balcony

But Schiffmann and Schrieder have found out already that 20 hours per year - the estimate provided by the company - is too low. "I have spent countless hours on the Internet to learn about bees, even before they arrived. And still, I know so little," Schrieder says.

Schiffmann and Schrieder were motivated not by the free honey - rather, by knowledge of bees' decline. "We are fascinated by bees. It would be great if we could help them," Schiffmann said. One thing is sure: Bees need our help.

Starting about a decade ago, colonies of European honeybees began to mysteriously decline. Around the world, beehives would go empty from one day to the next - this has since been named colony collapse disorder.

And the proportions of this decline continue to grow. Last winter, about 30 percent of all German bee colonies died off - natural loss ranges from 10 to 15 percent. In the United States, colony loss has been around 30 percent for the last eight years, increasing to 60 percent in some states.

These numbers are not only alarming from an environmental perspective, but also from an economic one: About a third of our crops are pollinated by bees. Without bees, we wouldn't have almonds, cherries or cucumbers, or innumerable other flowering fruits and vegetables.

Scientists are still debating what is causing the global bee crisis - one prime suspect is the Varroa mite. Similar to ticks, the mites suck the bees' blood, and spread disease. They reproduce in the bees' brood cells, through that weakening the hive at its core.

The extensive use of pesticides in agriculture is said to be another factor causing the dramatic decline in bee colonies. In 2013, the European Union reacted to scientific evidence and protests by environmental activists by banning so-called neonicotinoids.

These pesticides are applied to seeds, but can also be found in nectar and pollen - where they come into direct contact with bees.

Although the EU ban will expire at the end of 2015, the fight over harmfulness of neonicotinoids will continue. A recently published study suggests that the amount of pesticide bees bring home when they collect nectar and pollen is below harmful levels.

Bee scientist Rosenkranz supports this thesis: "We have done extensive research on the issue and found that low doses of pesticides do not critically harm a colony. In certain agricultural areas, neonicotinoids could be helpful." 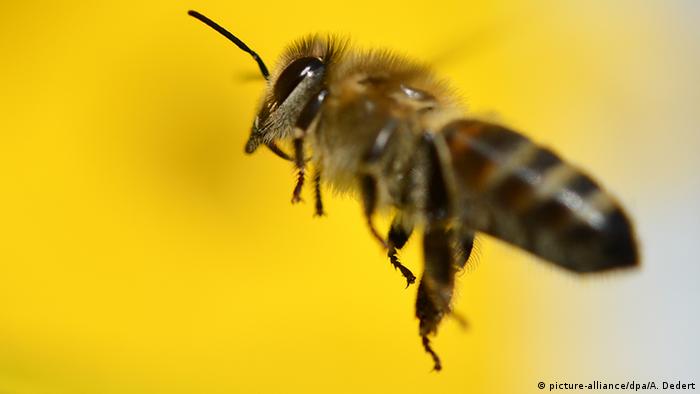 Bees: Are pesticides at fault for colony collapse disorder?

However, Rosenkranz says that pesticides do have a general effect on bees. "A single bee could definitely be harmed by the pesticides."

"We still don't know what influence these toxics have on the general biodiversity," Rosenkranz adds. Wild bees or bumblebees are more sensitive to the pesticides than the honeybee.

Along these lines, new scientific evidence from London casts a damning light on neonicotinoids. "We found that bees specifically seek out nectar that contains these pesticides," lead scientist Geraldine Wright from Newscastle University tells DW.

As the name suggests, neonicotinoids has a similar effect on the insect brain as nicotine does on human brains. "This is no good news for the bees," Wright says.

Wright's study suggests that bees get addicted to nectar containing neonicotinoids - meaning that they would collect pollen and nectar from fields treated with neonicotinoids, even if they had a healthy, untreated alternative.

Rescuing bees - from your balcony? 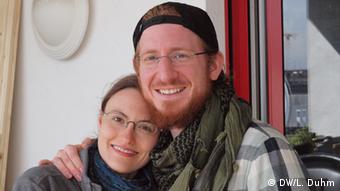 "We hope to help the bees," say Jonas Schiffmann and Veronika Schrieder

Back on the Cologne balcony, Schiffmann's bees are not likely to come into much contact with pesticides. Though it seems contradictory, bees find more food in the city than in rural areas - and, it is more pure.

"There are a lot of other balconies with flowering plants on them, and there is also a cemetery just around the corner. Our bees will find enough food here," Schiffmann believes. So through keeping bees in the city, has the couple found the answer to the devastating bee crisis?

Experienced beekeeper Susanne Kleinmann from Hamburg is not so sure: "To keep your bees healthy, you need to know a lot and put a lot of work into them." In Kleinmann's opinion, urban beekeepers often do not have enough prior experience to care for their bees correctly.

Poorly cared-for bees can even harm others, Kleinmann adds. Bees can fly up to three kilometers from their hive, and rub wings with other bees all the time. Thus, an untreated illness in one hive can infect hundreds of other colonies.

"We look at urban beekeeping critically," confirms Rosenkranz. The public awareness element is positive, of course. "But once you have your own bees, you should be aware: I carry a big responsibility." 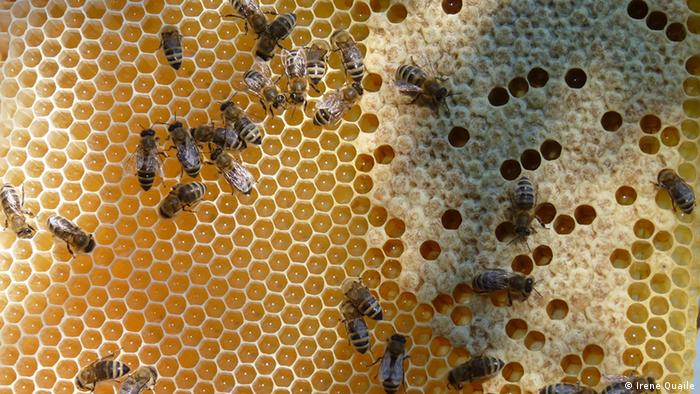 Schiffmann and Schrieder seem to be aware of the responsibility they hold. They have already registered their hive with the local veterinary authority and are also currently taking a beekeeping course to learn more about their busy new flat-mates. Still, they might encounter unexpected problems along their bee-helping journey.

Back on the balcony, Schiffmann is talking to the neighbors who are enjoying a lunch break on the terrace downstairs. "We can't open our windows any more," a middle-aged woman says. One of them already got stung by a bee, she goes on.

"They'll calm down eventually," Schiffmann says. It is not entirely clear if he is referring to the bees - or the neighbors.

Bees are having a hard time. Pesticides, viruses, varroa mites and climate change pose major threats. Scientists have found that some bees can cope better with others. (01.08.2014)

As of December 1, farmers in the European Union will no longer be able to make large-scale use of pesticides suspected of killing bee populations. But the busy honey-makers remain under threat. (01.12.2013)