A suicide bomber aiming to strike Islam's holiest site has blown himself up after being surrounded by police. Millions of faithful from around the world have gathered in Mecca to mark the end of Ramadan. 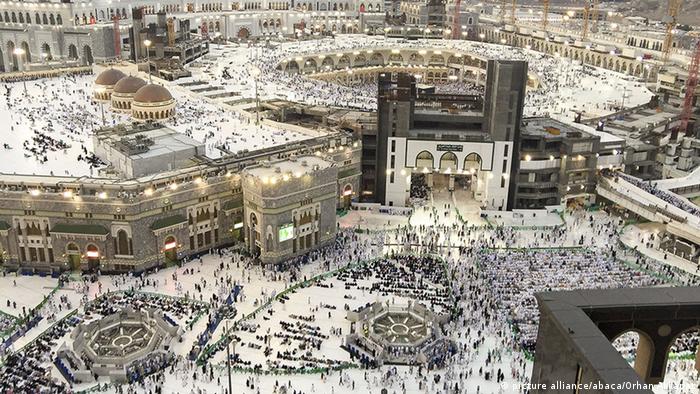 A man who was planning to attack the Grand Mosque in Mecca blew himself up in a house which had been surrounded by security forces.

The explosion caused the three-level building to collapse, injuring 11 people, including six foreigners and five members of security forces, the ministry said.

Purported images from the scene that circulated on social media showed an alley filled with bricks and other debris apparently from a blast.

The ministry said the incident came after it conducted two raids in Mecca and one in Jeddah to disrupt the plot.

Security forces detained five other militants, including one woman, according to a statement.

The Interior Ministry "confirms that this terrorist network, whose terrorist plan was thwarted, violated, in what they would have perpetrated, all sanctities by targeting the security of the Grand Mosque, the holiest place on Earth."

"They obeyed their evil and corrupt self-serving schemes managed from abroad whose aim is to destabilize the security and stability of this blessed country," the statement said.

The ministry did not name the group involved in the attack.

The blast happened as hundreds of thousands of worshipers from around the world gathered at the Masjid al-Haram, commonly known as the Grand Mosque, for early afternoon prayers at the conclusion of the holy fasting month of Ramadan.

Saudi Arabia has been hit with periodic bombings and shootings, mostly targeting the Shiite minority, since late 2014.

Four people died in an explosion near the end of Ramadan last year in the city of Medina close to Islam's second holiest site, the prophet's mosque.

It was one of three suicide blasts around the kingdom on the same day, which the US Central Intelligence Agency said bore the hallmarks of the so-called "Islamic State."

IS leader Abu Bakr al-Baghdadi had previously called for attacks against the kingdom.

Who is the 'Islamic State' leader Abu Bakr al-Baghdadi?

From domestic insurgent group to global terror organization, Abu Bakr al-Baghdadi has transformed the "Islamic State" into what it is today. Amid reports of his death, DW examines the life of the world's most wanted man. (16.06.2017)

King Salman of Saudi Arabia has vowed to strike back at those who lead youths to extremism, a day after triple suicide attacks in the kingdom. "Islamic State" (IS) militants are being blamed for the bombings. (06.07.2016)