Mohammed bin Salman is visiting Turkey for the first time since the murder of journalist Jamal Khashoggi in 2018. The trip comes as Turkey faces its worst economic crisis in decades. 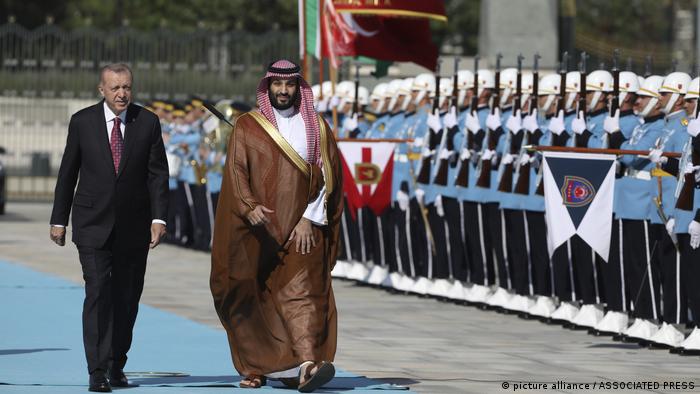 Turkish President Recep Tayyip Erdogan (left) and Saudi Crown Prince Mohammed bin Salman are trying to mend ties between their countries, which soured after the murder of Jamal Khashoggi

President Recep Tayyip Erdogan welcomed Saudi Arabia's Crown Prince Mohammed bin Salman at an official ceremony at the presidential complex in Ankara on Wednesday. The trip is seen as an attempt to normalize relations between the countries that soured following the murder of Saudi journalist Jamal Khashoggi inside Riyadh's Istanbul consulate in 2018.

The crown prince, seen as the de-facto leader of Saudi Arabia, met Erdogan on the last leg of a Middle East tour that has taken him to Egypt and Jordan. His visit comes ahead of US President Joe Biden's trip to the region next month.

In April, Erdogan traveled to Saudi Arabia and held one-on-one talks with the Saudi prince, where he raised the possibility of investments that could help ease the strain on Turkey's struggling economy.

Saudi Arabia has been trying to broaden its alliances at a time when relations between Riyadh and Washington are strained. The crown prince also wants to end the scandal surrounding Khashoggi's assassination, which has damaged his image. 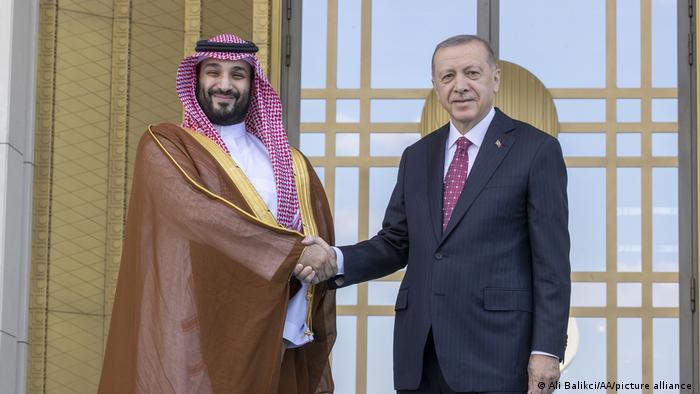 The crown prince, known as MBS and Erdogan's meeting was aimed at fully normalising ties

Relations between the countries hit rock bottom after Turkey gave a blow-by-blow account of how a Saudi hit squad killed and dismembered Khashoggi at the kingdom's consulate in Istanbul in 2018. At the time, Erdogan blamed the "highest level" of the Saudi government.

Khashoggi had entered the consulate in October 2018 by appointment to obtain papers to allow him to wed his Turkish fiancee, who waited for him outside. He never emerged and his body was never found.

The killing of Khashoggi sparked global outrage and put pressure on Mohammed bin Salman, who was said to have approved the operation to kill or capture Khashoggi, according to a US intelligence assessment. The crown prince has denied any knowledge of the operation that was carried out by agents who worked directly for him.

Turkey had opened a trial in absentia against 26 Saudis suspected of Khashoggi's murder, but the court earlier this year ruled to halt the proceedings and transferred the case to Saudi Arabia, paving the way for the countries' rapprochement.

The court's decision drew strong protests from Khashoggi's Turkish fiancee, Hatice Cengiz, and Turkey's political opposition. "He gets off the plane and hugs the killers," said Kemal Kilicdaroglu, leader of the Republican People's Party (CHP), who expressed outrage over Erdogan's earlier visit to Saudi Arabia.

Turkey's efforts to improve ties with Saudi Arabia comes as Turkey faces its worst economic crisis in two decades and is trying to attract investments from wealthy Gulf Arab states. Turkey has also taken steps to improve relations with the United Arab Emirates, Egypt and Israel.

Turkey's economy is being battered by a slumping lira and inflation soaring beyond 70%. Analysts believe the resulting drop in Erdogan's public approval and the depletion of state reserves means the Turkish leader can ill afford to maintain his hostile stance toward the petrodollar-filled Gulf states.

Saudi funds and foreign currency could help Erdogan shore up support ahead of elections in June 2023, analysts say.