Saudi Arabia has pledged to build a car-free city, dubbed 'The Line', as the first major step in developing its futuristic NEOM business zone. The construction is set to start within months. 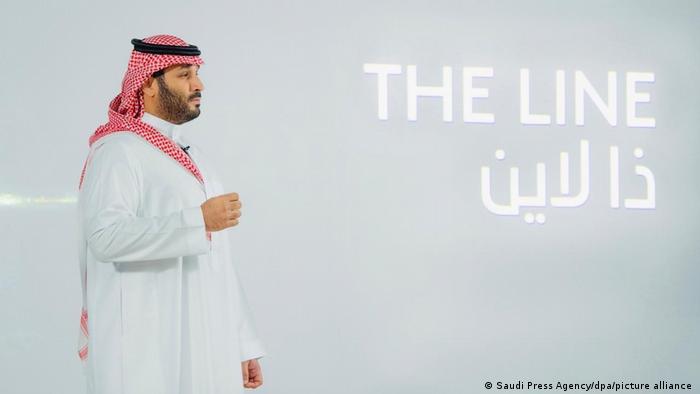 Saudi Arabia unveiled plans for a zero carbon city within the projected NEOM zone,  the kingdom's futuristic business hub set to be built along the Red Sea coast.

Crown Prince Mohammed bin Salman announced the launch of the city, called 'The Line', in a televised presentation on Sunday.

The eco-city with "zero cars, zero streets and zero carbon emissions" will have the capacity to house one million residents, according to the de-facto ruler of the oil-rich kingdom.

It will have facilities like schools, health centers and green spaces.

The construction of the city is set to begin in the first quarter of this year.

"We need to transform the concept of a conventional city into that of a futuristic one," Prince Mohammed said.

NEOM expected to rake in billions

With a high-speed public transport system planned, travel within the pedestrian city is expected to take no more than 20 minutes, a NEOM statement said.

Artificial intelligence will have an important role in the venture, the statement said, adding that "it will be powered by 100 percent clean energy, providing pollution-free, healthier and more sustainable environments for residents".

NEOM is a flagship $500 billion project in northwestern Saudi Arabia, which is slated to be built from scratch on a 26,500-square-kilometer (10,230-square-mile) area and link Jordan and Egypt via Saudi territory.

There has been great interest around NEOM ever since its announcement in 2017 with the mega development project being promoted as something straight out of a science fiction.

Saudi Arabia is the world's leading crude exporter and is also among the most polluting countries.