Two families have filed separate suits against the "Infowars" radio host, who claims the 2012 school shooting was a hoax. Jones has faced similar suits in the past concerning conspiracy theories he champions. 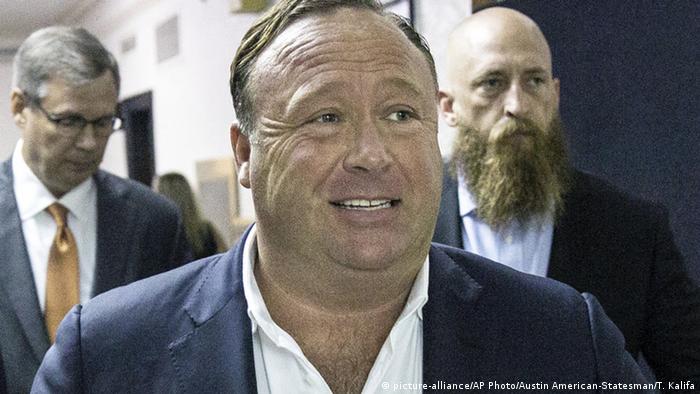 The families of two children killed at the 2012 school shooting at Sandy Hook Elementary School in Connecticut filed suits against conspiracy theorist Alex Jones on Tuesday. The families are seeking more than $1 million (€800,000) for defamation, relating to Jones' repeated claims on his widely popular radio show that the shooting was staged in order for left-wing politicians to push gun control laws.

"This heartless and vile act of defamation reignited the Sandy Hook 'false flag' conspiracy and tore open the emotional wounds that [the family] has tried so desperately to heal," the lawsuit for the family of deceased 6-year-old Jesse Heslin said.

Another, brought by the family of Noah Pozner, also 6 at the time, read: "Our clients have been tormented for five years by Mr. Jones' ghoulish accusations that they are actors who faked their children's deaths as part of a fraud on the American people. Enough is enough."

The charges relate to Jones' use of his Infowars radio program to continuously push the theory that the Sandy Hook shootings did not occur, even going so far as to say interviews with Pozner's mother had been doctored, and that she was lying about her son's death.

Both lawsuits allege that Jones' actions have inspired others to make death threats against their families.

Heslin and Pozner were two of the 20 children and six adults killed by Adam Lanza on December 14, 2012.

Jones was faced with a similar suit in June 2017. The far-right radio host was sued by the owner of Washington DC pizzeria Comet Ping Pong after Jones' claims that the restaurant was at the center of a child-porn conspiracy dubbed "Pizzagate" prompted a man to threaten the pizzeria with a loaded rifle. In that instance, Jones retracted his claims and apologized.

He issued another retraction and apology soon after to yogurt company Chobani, which employs refugees, after claiming the company was tied to a case of child sexual assault.

Jones has also accused survivors of the Parkland school shooting in Florida of being paid actors.

The US gunmaker Remington has filed for bankruptcy protection after years of falling sales. The company makes the Bushmaster AR-15 rifle used in a 2012 mass shooting that left 20 first-graders and six educators dead. (26.03.2018)

Prosecutors say they will seek the death penalty for Nikolas Cruz, the former student charged with killing 17 people at a Florida high school last month. Defense lawyers say he'll only plead guilty if his life is spared. (14.03.2018)

This US conspiracy theorist had lied about the Sandy Hook school shooting for years. But, facing a multi-million dollar lawsuit, he now admits he was wrong.

It's the first time the conspiracy theorist has been held financially liable for his denial of the 2012 Sandy Hook school shooting.