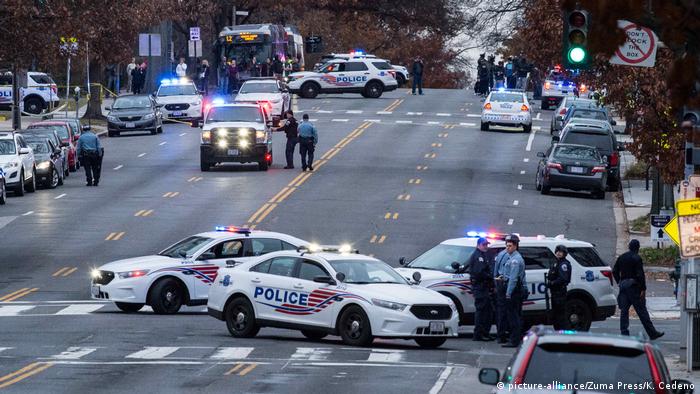 Police said the man entered the restaurant on Sunday night and pointed a firearm at an employee who fled and called police. The man fired one or two shots inside the restaurant and was later arrested without incident.  Nobody was injured.

Two weapons were found at the scene and a third in the man's care. He has been charged with assault with a dangerous weapon.

The 28-year-old man from North Carolina entered Comet Ping Pong restaurant to "self-investigate" a right-wing online conspiracy know as "pizzagate," alleging the pizzeria is the center of a child sex ring reaching to the highest levels of Washington's political elite.

"During a post arrest interview this evening, the suspect revealed that he came to the establishment to self-investigate 'pizzagate' (a fictitious online conspiracy theory)," police said in a statement.

Comet Ping Pong and its owner James Alefantis have faced online harassment and threats since the pizzagate story spread online in October ahead of the presidential election.

The original conspiracy developed from the Wikileaks emails of Hillary Clinton's campaign chief John Podesta and pictures on Alefantis' Instagram account that pizzagate conspiracy theorists say point to the eating establishment being a center of pedophilia.

A number of media outlets have written articles debunking the pizzagate conspiracy. However, the theory continues to grow as its believers attack mainstream media and demand an FBI investigation. Instead, authorities are investigating repeated threats against Alefantis.

Alefantis said in a statement the incident shows that "promoting false and reckless conspiracy theories" can lead to real and potentially dangerous consequences. "I hope that those involved in fanning these flames will take a moment to contemplate what happened here today, and stop promoting these falsehoods right away."

Online, many pizza conspiracy theorists responded that the incident on Sunday was a false flag operation and they would not give up until the case was investigated.

@dwnews Fake news: How reliable is Facebook as a news source?

Pizzagate is part of long-running right-wing allegations about widespread pedophilia in government, often centered on the Democratic Party and the Clinton family.

The conspiracy in some ways ties in with the case of billionaire and convicted child sex offender Jeffery Epstein and his connections to the Clinton family, as well as the sexting scandals involving former Congressman Anthony Weiner, whose wife, Huma Abedin, is Hillary Clinton's longtime aide.

Pizzagate also ties in with the case of former Republican House speaker Dennis Hastert, an admitted sex offender who a judge once called "a serial child molester."

The pizzagate conspiracy comes amid a heated debate over so-called "fake news" and its role in the outcome of this year's election.

Alphabet Inc's Google and Facebook Inc have announced measures which aim to reduce the spread of "fake news" on the internet. The organization's will be targeting advertising in the clampdown. (15.11.2016)

Justice Minister Heiko Maas has said Germans "must reckon" with the idea that internet-based misinformation could play a part in the 2017 federal election. MPs from Merkel's CDU party will be briefed on the issue Monday. (28.11.2016)