With the EU about to review its sanctions regime against Russia, Fiona Clark looks at how Russians are faring under the embargoes and asks if they’re really having any effect on the country's leadership. 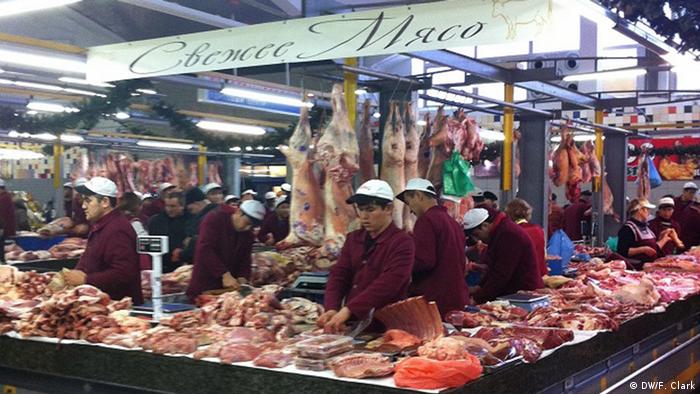 Russians might think I'm insane but there are times when I wander the aisles of my local supermarket and literally laugh out loud. At least it's better than crying when I see blueberries on sale for the equivalent of 16 euros a punnet (125 grams) or mixed berries for just under 20 euros. I know they may have travelled all the way from the US, but seriously, who pays these prices? I assume somebody does, but it can only be wealthy because for the average Muscovite that's about 10 percent of a weekly wage.

I know fresh berries may not be a necessity, but even staples like yoghurt and ‘kasha' (buckwheat, usually eaten for breakfast or as a potato replacement with dinner) have had a hefty price hike. Strangely enough they're both locally produced so shouldn't be affected by the sanctions that Russia imposed on the EU in retaliation for the sanctions imposed on it, nor should they be affected by those imposed by the EU, or by the severely devalued ruble. In general though, most products have gone up by about 30 percent, and some, like Italian prosciutto or French cheese, have completely disappeared from the shelves. The last time I saw real Italian parmesan was in January. 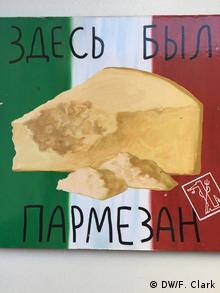 The lack of these 'luxury' items has brought out the entrepreneur in some. Like kids craving their names in a tree trunk for all eternity, one clever art gallery owner has started producing fridge magnets stating "parmesan was here" or "ham was here" to remind consumers of the delicacies they used to enjoy. Now those of us who travel regularly carry them back from Europe in our hand luggage. But cheese is clearly a suspicious item. Every time I take a bag full of eight wedges of parmesan, four blocks of cheddar and an assortment of goat's cheese through Heathrow I'm pulled aside for security check. "I live in Russia," I tell them. "Sanctions. You can't get real cheese." Like a drug-addict, I explain you are allowed to bring it into the country as long as it's "for personal use only." 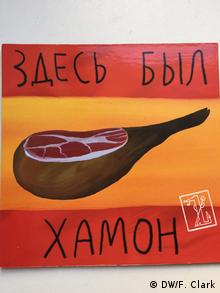 A boost for entrepreneurs

But what's bad for me, may not be so bad for Russian manufacturers. The sanctions have provided a huge opportunity to artisanal producers to bring their products to those who have enough money to pay for them. Like the blueberries, you may need to take out a small loan for a slice of camembert at 48 euro/kg, but Russia has a lot of wealthy people so there is a market for these products. For the average man, however, this is out of the question. Instead supermarkets now stock an array of locally produced copies of popular cheeses. There are two problems with this - the fakes don't taste anything like the real thing (think rubbery plastic), and, according to recent media reports, they may be made with palm oil, not milk products.

Since the sanctions started a year ago Russia has imported 39 percent more palm oil, and Russia's agricultural watchdog, Rosselkhoznadzor, says much of that is destined for the fake cheese market which now makes up some 50 percent of the cheeses in the supermarket fridge.

But is it the sanctions that have driven the prices up? Before they were introduced Russia was already looking down the barrel of an economic downturn. Then the oil price plummeted, dragging the ruble down with it. And the result of all these things combined is that inflation is up - this April it was running at 16 percent, more than twice as high as it was a year earlier. But strangely enough people don't seem to be angry - yet. The general attitude, as one taxi driver told me, was that "we've been through tough times before and we know how to survive."

They are however, being prudent with their finances. One local newspaper, The Moscow Times, cites a survey showing that more than 50 percent of Russians have reduced their spending and almost 20 percent have no disposable income left after paying for food and housing. They're cancelling holidays abroad and tourism to Europe is down 30 percent. And businesses are feeling the pinch. Government statistics show retail spending has dropped 9.8 percent in the year to April 2015.

Clothes shops and restaurants are shutting their doors and over the past few weeks I've noticed that stalls at my local food market are disappearing as increased rents drive vendors out. One meat seller explained that she pays 5,000 rubles (about 90 euros) a day to rent a one meter length of bench space (unrefrigerated) to sell her pork. On top of that she has to pay 4,000 rubles for her butcher and overnight refrigeration. "I'm sorry for my language," she says, "but they even charge you 100 rubles just to go to the toilet. 100 rubles!" That's about 1.80 euros - more than three times the average 50 cents charged in Germany.

Fiona Clark writes a regular column from Moscow for DW

In total each month she pays out 270,000 rubles. She has to sell a lot of meat to cover that. Unfortunately though salaries aren't growing. In fact government statistics show real wages have fallen by just over 13 percent in the year to April 2015. Faced with an economic slowdown many companies are cutting workers' pay or cutting their hours, or simply laying them off. The Ministry of Labor said that the number of people officially registered as unemployed increased by 3.4 percent to over 900,000 in late January. The Russia and India Report says that's the equivalent of about 30,000 losing their jobs in just one week.

For foreign companies operating in Russia it's not all bad news. The devalued ruble means staff are costing them about 30 percent less than usual. Workers aren't happy but as one country manager told me, he and his competitors in the IT industry have had discussions and will only raise the pay of their staff if they do it in unison.

If they act unilaterally they risk a flood of resignations as staff flock to the higher paying company, giving the first to raise rates a cherry picking opportunity.

And it's good for exports. A devalued ruble makes Russia's raw materials more competitive on the world market - ironically helping many of the oligarchs on the sanctions list to increase their profits.

I'm no economist, but less disposable income can only mean less demand - effectively rubbing salt into an already wounded economy that's set to contract by around 4 percent this year. It's hard to say how much of this is the result of the slowing economy, the falling oil price or the sanctions, but it's even harder to tell if that elite inner circle who were supposed to be the real targets of sanctions are hurting. They may not be holidaying this summer in Cannes, Mallorca or Australia - as the sanctioned CEO of Russia's railways, Vladimir Yakunin said "I am sorry I won't be able to see the kangaroos there." But instead he'll visit the white tigers at a Sochi wildlife refuge.