Despite a relatively tolerant climate toward homosexuals, same-sex marriage is not recognized in Croatia. A referendum is being held on December 1 that would define marriage as being between a man and woman. 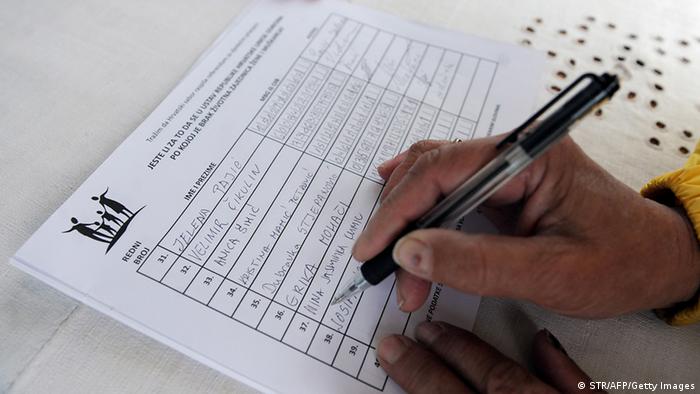 In parliament, the media and on the streets, it seems everything boils down to being "for" or "against." Same-sex marriage has suddenly become an article of faith. Such polarization had not been seen since the war of independence from Yugoslavia in the early 1990s. 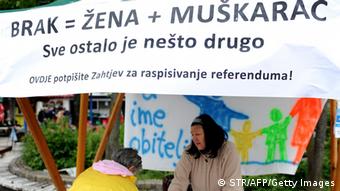 Their banner proclaims 'Marriage equals woman plus men, everything else is something different'

On Sunday (01.12.2013), voters will go to the polls on the issue in a referendum initiated by the citizens' group "In the Name of the Family."

"We want to show clearly that the majority of people in Croatia is convinced that marriage is only a union between a man and a woman," the group's head Zelja Markic told DW. "And that all the rights pertaining to marriage can only be part of a union between a woman and a man."

The Catholic Church weighs in

The group collected 750,000 signatures in only two weeks in May - about 20 percent of voters in Croatia, twice as many as the minimum needed to bring about a referendum. For Markic, this was an important step in the development of Croatia's democracy: "This is the first referendum in Croatia to be called for and organized by voters since independence 23 years ago."

In this sense, the referendum can be seen as a form of grassroots democracy, because there had previously been only national referenda organized by the state. Now, for the first time, "the citizens will decide what's important to them," Markic said. And that's despite the strong opposition to the constitutional referendum from the Social Democratic-led government. 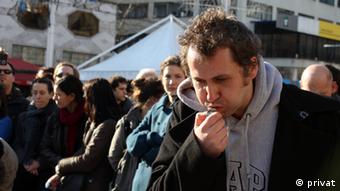 But it wasn't the grassroots alone who brought about the vote. The main opposition party, the conservative Croatian Democratic Union, and the Catholic Church helped organize and fund the citizens' initiative. The church in Croatia is highly influential - almost 90 percent of the population is nominally Catholic.

The conservative bloc said it's a matter of having "a Croatia in which same-sex couples cannot adopt children," Markic said in an interview with the Catholic paper "Glas Koncila." This would go against Croatian culture, identity and values, she said.

Numerous left-wing organizations including those representing women and gays, along with peace and rights groups are alarmed by the initiative. As a result, they have jointly launched the "Citizens Vote Against" alliance to mobilize voters to stop the amendment.

The groups fear a worsening social climate in Croatia, which until now been relatively tolerant compared to other countries in Southeast Europe. According to gay rights group Liga LGBTI, Croatia is ranked 13th out of 49 European countries in its treatment of homosexuals, just behind Finland. Numerous gay and lesbian organizations are active in the country, police cadets are instructed about gay rights, and in June, the prime minister's wife demonstratively took part in Zagreb's 12th gay pride parade.

Now rights groups are voicing concerns the referendum will "open the gate wide to further constitutional changes" and that "human rights in Croatia will be threatened in the long term," Jelena Berkovic from "Citizens Vote Against" said. "We want to protect and advance human rights in Croatia. And that means above all protecting the rights of minorities."

Until now, there have been no restrictions on the substance of a proposed referendum in Croatia, Zagreb political scientist and sociologist Zarko Puhovski said. "Everything can be put to a question." Whether the results are positive or negative is determined solely by the majority of the votes.

"Theoretically, only one person could cast a vote and the decision would be valid for everyone," Puhovski said. To overcome this weakness, the government is now quickly trying to change the law. This would place clear limits on future referendums.

The referendum looks likely to give its initiators what they want. In conservative Croatia, according to recent polls, 68 percent of the citizens are planning to vote for the constitutional amendment and only 26 percent against.

France's top court has ruled that mayors cannot refuse to carry out same-sex marriages on the grounds it goes against their religious or moral beliefs. Same-sex marriage was signed into law in May. (18.10.2013)

British lawmakers have passed a bill legalizing same-sex marriage in England and Wales. The bill is expected to become law later this week, paving the way for the first same-sex weddings to be held in 2014. (16.07.2013)