A painting of Christ by da Vinci sold at auction for $450 million is headed to the newly opened Louvre Abu Dhabi, the museum has said. A US newspaper reported it has found the mystery buyer of the "Salvator Mundi." 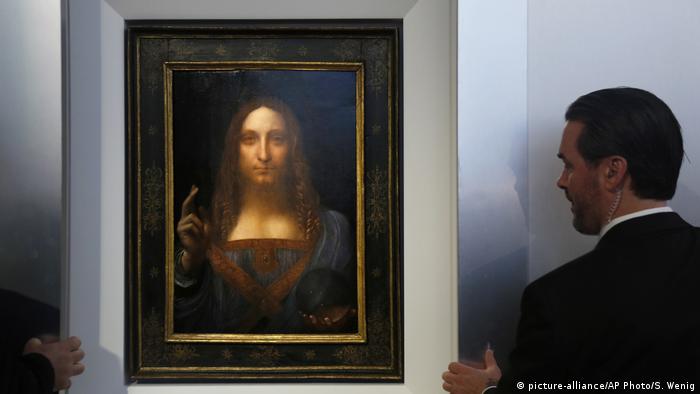 The Louvre Abu Dhabi announced via Twitter in English, French and Arabic on Wednesday that the famed Da Vinci painting "is coming to" the gallery.

Christie's auction house, which sold the painting in a record-shattering auction that stunned the art world in November, responded by congratulating the Louvre Abu Dhabi, tweeting that the work of art was going to "its new home."

It was unclear if the painting was going to the Louvre Abu Dhabi on loan, or if the museum purchased it outright or with other buyers. The museum did not immediately respond to DW's request for comment.

Shortly following the announcement, The New York Times reported that it had uncovered the identity of the mystery phone bidder who had paid $450.3 million (€382 million) for the work of art at a New York auction.

Citing documents it reviewed, the paper named Saudi Arabia's Prince Bader bin Abdullah bin Mohammed bin Farhan al-Saud as the buyer. The Times also described him as having a relatively low public profile and no history as a major art collector, while also being a friend and associate of the country's powerful Crown Prince Mohammed Bin Salman.

The French weekly le Journal du Dimanche, however, reported that two investment firms were behind the painting's purchase as part of a financial arrangement involving several museums. It said that the work will be lent or resold to museums, largely in the Middle East and Asia.

What's a fair price for a masterpiece?

"Salvator Mundi" translates to "Savior of the world" and depicts Jesus Christ holding a crystal orb. The 500-year-old oil painting has a colorful, mysterious and controversial history — some art experts still question whether it is an original Leonardo da Vinci painting and it once changed owners in 1958 for $60. Its previous owner, Russian billionaire Dmitry Rybolovlev, had complained he was overcharged for the work by a Swiss art dealer when he had paid $127.5 million for it in 2013.

Exhibiting the painting would prove a major attraction for the Louvre Abu Dhabi, which opened in November in a ceremony attended by French President Emmanuel Macron.

He described the facility, an offshoot of the famous Paris art museum situated in the capital of the United Arab Emirates, as a "bridge between civilizations."