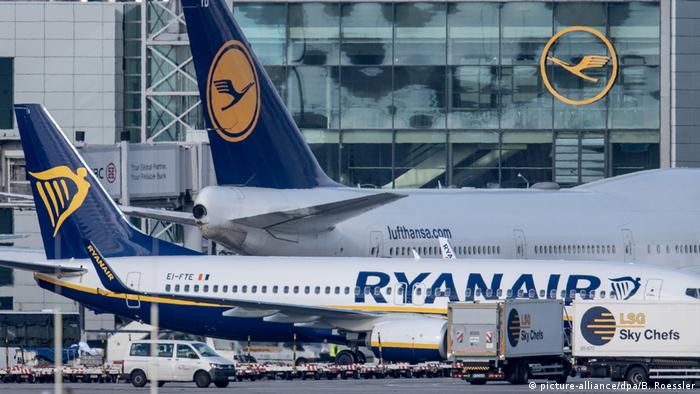 Ryanair said Tuesday it would contest a €9 billion ($9.9 billion) aid package from the German government to prop up Lufthansa. The aid package must still be cleared by the European Commission's competition arm.

In a statement, the Ireland-based budget carrier's CEO, Michael O'Leary, said the government-backed aid would make it harder for budget airlines like Ryanair to compete in short haul markets to and from Germany.

Read more: Lufthansa to resume to 20 destinations in June

"Ryanair will appeal against this latest example of illegal state aid to Lufthansa, which will massively distort competition."

"How can airlines like Ryanair, EasyJet and Laudamotion be expected to compete with Lufthansa now that it has €9 billion worth of subsidies?"

Following weeks of negotiation, theGerman government and Lufthansa struck a deal on state aid including secured loans and a 20% government shareholder stake in the airline.

But first, EU competition regulators must evaluate whether the government aid package restricts competition in the European aviation sector.

In the statement, O'Leary said the package would "tighten Lufthansa's monopoly grip" on the German aviation market.

"Lufthansa is addicted to state aid. Whenever there is a crisis, Lufthansa's first reflex is to put its hand in the German Government's pocket," O'Leary said.

Read more: Opinion — When the state gets on board

Earlier in May, O'Leary said Ryanair had lost over €100 million in the first quarter of 2020, as the coronavirus pandemic all but shut down air travel in Europe. He has also referred to flag carrier airlines like Lufthansa and Air France as "state aid junkies."

Around 90% of Lufthansa's regular flights have been grounded for several weeks during the pandemic. The company is currently estimated to be losing around €1 million euros every hour.

In 2015, 150 people died when a Lufthansa plane crashed into the French Alps. Relatives are seeking more compensation and to find who was responsible for the medical supervision of the 'unfit to work' co-pilot. (06.05.2020)