Rwanda and Uganda – neighbors at loggerheads 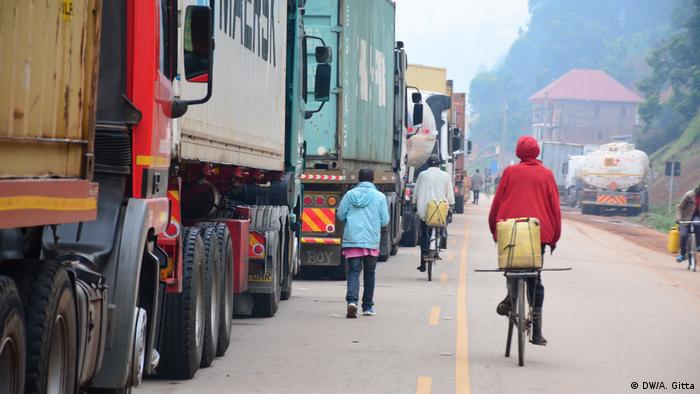 Relationships within the six-member East African Community have never been easy. The latest stand-off between Rwanda and Uganda follows a spat of accusations over the treatment of traders and nationals on either side, as well as spying allegations.

"The Rwandan border officials are not stamping our passports," Rwandan truck driver Johnson Kiyingi told DW. He's been stuck at the Katuna border crossing for three days. "The Rwandan side is peaceful, there are no issues. We spent the whole day here and in the evening, police ordered us to go into our trucks."

Kiyingi doesn't know what to make of this sudden blockade of the route he regularly takes. "Our truck is empty but they have blocked us from crossing over to Uganda. They allow us to cross over to Uganda to eat and come back. They are not giving us any reasons."

As landlocked countries, both Rwanda and Uganda rely heavily on cross-border trade. Uganda additionally acts as a transit country for goods coming from the Kenyan ports to Rwanda. Neighboring countries, such as the Democratic Republic of Congo and Burundi, are also affected by the border blockade.

"It's really stressful for me and my clients. We are stuck with our merchandise. We cannot sell," Diane Umwiza, a Rwandan businesswoman who sells African printed textiles to clients in Uganda, said.  "We really need a quick solution because it is very hard to spend money when you are not making any." 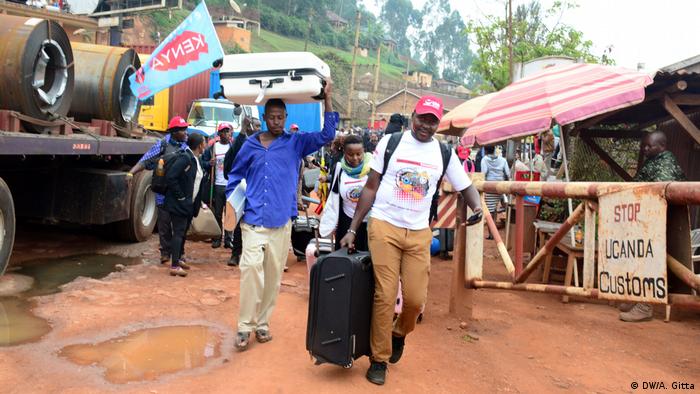 While buses are held up at the border, passengers make their way across on foot

After the weeklong stand-off, Rwanda is letting some of the traders back in, but is warning its own citizens about travelling to Uganda, citing security reasons.

Rwanda's minister for foreign affairs, Richard Sezibera, says that the issues with Uganda have been going on for a while and efforts to address them have hit a snag. Speaking to reporters, he accused Uganda of harboring armed groups.

"Rwandans are arrested, tortured, harassed and deported for reasons not clear to us," he said. "The second challenge is that there are armed groups that are opposed to the government of Rwanda that have a violent agenda,who operate in Uganda."

Rwanda is particularly concerned about the alleged existence of the Rwandan National Congress (RNC) group in Uganda – a group that it claims is plotting to overthrow the Rwandan regime. 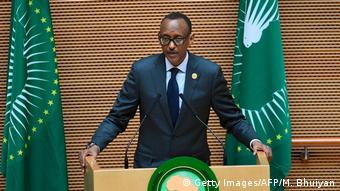 Ugandan Foreign Affairs Minister Sam Kutesa denied these allegations. "Uganda does not and cannot allow anybody to operate in its territory that threatens a neighbor," his statement read. While Uganda's government has downplayed the matter, both the Ugandan business community and parliament are demanding answers.

Ugandan writer and political risk analyst, Angelo Izama, thinks that the matter could be resolved if the two sides just sat down together to talk. "We've been there before," he told DW. "I think if Rwandans feel more comfortable about those internal tensions and Uganda can provide that assurance, that this would go away."

The dispute has been brewing below the surface for several months. In 2018, Ugandan police chief General Kale Kayihura was arrested and is being tried in court over allegedly helping to kidnap Rwandans living in exile in Uganda and handing them over to the Rwandan government.

According to Izama, it is ordinary Rwandans and Ugandans who are suffering from the dispute. "I think most ordinary East Africans are ahead of the governments with integration. There's a large movement of people and trade," Izama told DW. The two countries have longstanding historical ties, he says, and the border which came with colonialism separated people who actually spoke the same languages and had the same culture. 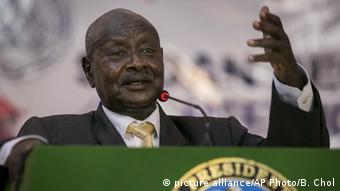 "A large number of Rwandan refugees in the 1980s joined the army of Yoweri Museveni and were instrumental in bringing him to power," Izama said. "Later, in the1990s, a whole division of the Ugandan army entered Rwanda and was led by Paul Kagame, who was a Ugandan military officer at that time. And they have joint interests in the DRC nearby."

Another loser in the dispute is the East African Community – the six-nation regional body, which has been discussing freedom of movement of people and goods, a common currency and stronger regional ties, for years. Kenya, Uganda and Tanzania even have an East African passport, which should allow free travel within the area.

What could still save the situation, he thinks, is if both leaders were to put their personal grievances aside. Both strongmen, Museveni and Kagame, are known to be keeping a tough grip on their countries, running what Izama calls  'a model of the personalized state.'

Nasra Bishumba contributed to this report

The deal to improve trade within the six-member East African bloc is being thwarted by bilateral political disputes, traders and analysts say. (12.09.2018)