Russia′s ′whale jail′: Why 100 marine mammals are trapped in captivity | Environment| All topics from climate change to conservation | DW | 01.04.2019

Russia's 'whale jail': Why 100 marine mammals are trapped in captivity

A hundred whales are being kept in a "whale jail" in icy Russia waters. Environmental groups and celebrities such as Leonardo DiCaprio are calling for their release. But their fate remains uncertain. When 90 beluga whales and 11 orcas were captured in Russian waters about six months ago, largely destined, so the story went for Chinese aquariums, they caught the imagination of certain celebrities and politicians.

In a tweet Leonardo DiCaprio made a plea for their release, and even Russian President Vladimir Putin called for authorities to determine the fate of the mammals by the first of March.

But now, a month past that deadline, they're still being held in the easterly reaches of Russia, in the Center of Adaptation for Marine Animals — aka the "whale jail."

The animals, which were illegally captured in the Sea of Okhotsk last year, became trapped at the center after Russia's Prosecutor General said the companies that caught them didn't have permits to export them to China.

Environmentalists, who claim the animals are being kept in cramped, stressful conditions, fear for their health and their future. They say that being fed by humans and given medicines to boost their immune systems could make it harder for them to fend for themselves if they make it back into the wild.

Based on pictures from the "jail", a group of international scientists concluded the health of the animals is deteriorating.

So far, at least three beluga and one orca have been reported missing from the enclosures. The official line is that they escaped. Environmentalists believe they died in captivity. 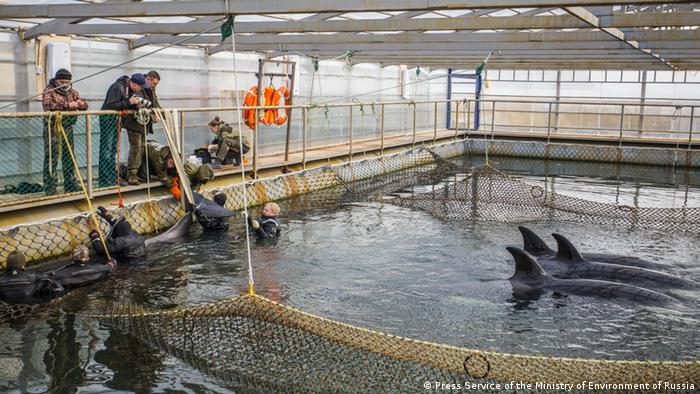 No need to worry. Or is there?

But the Russian Ministry of Natural Resources and Environment (MNR),  says the animals are doing well.

"We want to reassure everyone who is closely monitoring the situation that there are no concerns about the orcas in the Bay of Srednaya," it said in a statement.

The Russian Research Institute of Fisheries and Oceanography (VNIRO) says it is coordinating a group of experts to evaluate the health of the marine mammals, but that because they may struggle to survive back out in the ocean, only the fittest will be freed. 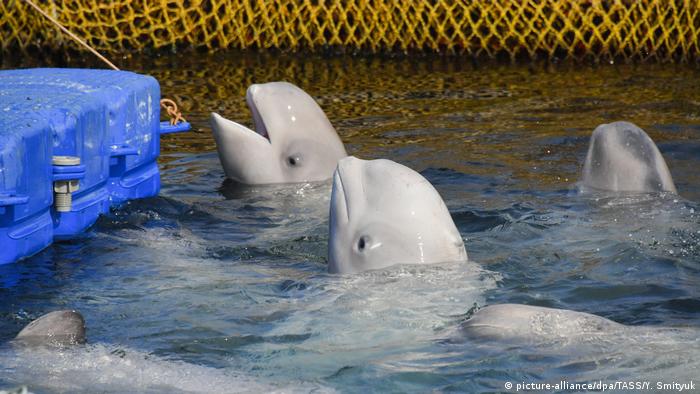 But Grigory Tsidulko, marine mammal expert and consultant to Greenpeace Russia fears that approach may be a front to hide economic interests.

"All animals could be released after adequate rehabilitation, but there is a major conflict of interest," he told DW.

"The group that assesses the health of the animals was extended after a meeting with the Ministry of Natural Resources and included representatives of some major Russian oceanariums."

The VNIRO, however, denies any conflict of interest, and says it is merely conducting "an objective and impartial assessment" of the animals, Alexey Nikolaevich Smorodov, head of public relations at VNIRO, told DW.

Back to the wild

Once the authorities decide how many of the mammals can go back to the wild, they will be rehabilitated in preparation. And when the ice-free period starts in June, those deemed fit to leave captivity will be taken back to where hunters pulled them from the water half a year ago.

The MNR says returning them to the same location will ease reunification with their family members.

According to the ministry, experts will use special vessels capable of carrying heavy loads — a single male orca can weight up to 6 tons — and which give the mammals enough space during the four or five day voyage back home.

Exactly what will become of those who don't make the grade for release, is unclear. But Tsidulko says there is some chance they will still end up in aquariums.

"In Russia live captures of these animals are not based on sound scientific data. This may present a threat to the health of individual whales and their wild populations," Tsidulko said, adding that keeping them captive for public display is simply "inhumane."

Tokyo says it may pull out of the International Whaling Commission after losing an attempt to restart commercial whaling. The 72-year-old IWC is facing its worst split over conservation needs versus substainable hunting. (15.09.2018)