Russia's military will join the combat against wildfires raging in Siberia as they rip through several remote regions, Kremlin officials said. The fires are affecting Arctic snow, a climate expert told DW. 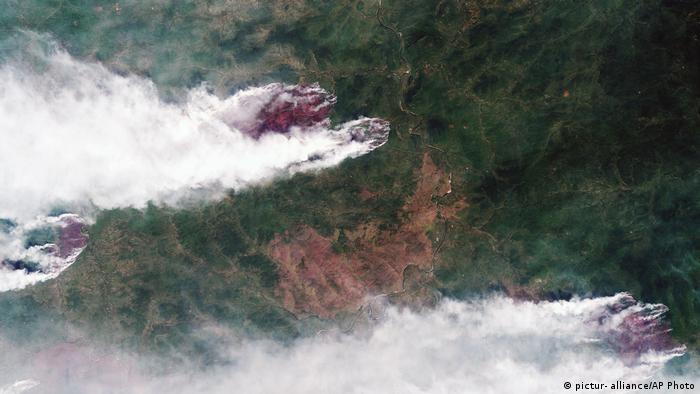 As residents of several Russian cities struggle with the effects of smoke from vast Siberian wildfires, President Vladimir Putin ordered the military to assist the firefighting effort.

"The military staff of the Defense Ministry will get involved in extinguishing Siberian fires," the Kremlin officials said on the president's website on Tuesday.

Putin gave the order after being briefed by Yevgeny Zinichev, the head of Russia's emergency ministry. The Kremlin did not specify what actions the military would take. Seperately, the defense ministry told news agencies that 10 planes and 10 helicopters had been deployed to the Krasnoyarsk region in Siberia.

No 'threat,' no firefighting

Earlier on Tuesday, Russia's forest protection agency said firefighters across Russia were actively fighting 147 forest fires, and that 32 had been put out the day before.

The Avialesoohrana forest protection agency said they were "constantly monitoring" another 321 forest fires in "remote and difficult-to-reach areas." The total area consumed by the fires was over 2.88 million hectares (7.12 million acres).

However, the agency said it was not fighting the fires in remote areas. The reason, according to a statement cited by the Interfax news agency, was that "there was no threat to population centers and economic objects, and the projected losses through firefighting surpass the potential damage of the fires."

However, experts have warned that damage caused by fires goes far beyond money.

Talking to DW Russian, Oxana Tarasova from the World Meteorological Organisation (WMO) warned of a vicious circle of Siberian fires, smoke particles wafting north, and melting snow on the Arctic.

"In other words, it all started burning because it got so warm and dry, [the fires] released aerosol, the aerosol fell on the snow, the snow began to melt, the climate change accelerates, the temperature rises," she told DW.

"We get a vicious circle."

'Have you seen what was going on in Europe?'

The WMO expert says the world will only face more and more extreme weather events as the climate keeps changing.

"For example, today we have enough precipitation to flood half of Siberia, and tomorrow the temperature rises to 45 degrees Celsius, everything dries up and starts burning. This back and forth from one extreme to another — it a sign of long-term climate change," she said.

"Have you seen what was going on in Europe? There was a heat wave two weeks long, that it got a bit cooler, than another heat wave started," Tarasova added.

"If we want to keep the planet habitable, we need to preserve the forests," she told DW.