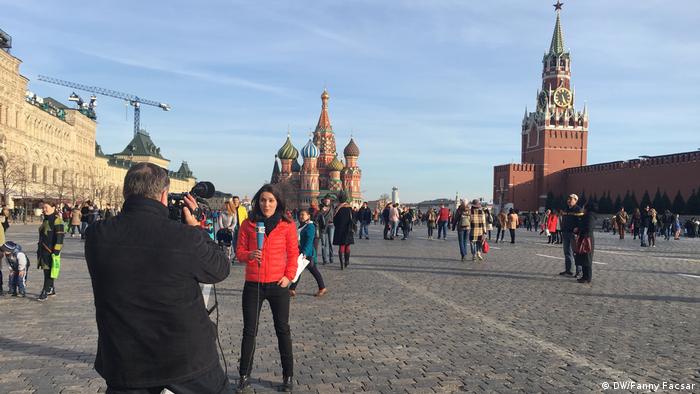 I came to Russia with one main question: Why do so many Russians tell opinion pollsters that they support President Vladimir Putin - while at the same time thousands turn out across Russia to protest against his policies? Putin’s approval ratings are continually at 80 percent, and he is especially popular among 18- to 24-year-olds. And the reason for that seems to me to be one basic ingredient of his politics: nationalism.

That dream of a 'nationalist alliance'

When I embarked on this trip to Moscow I wasn't even sure whether I would be allowed to film anything - due to strict media regulations. Also it wasn't clear who would be prepared to talk to me.

Maria Katasonova, a young nationalist activist who works for Putin's ruling United Russia party as well as the nationalist Rodina party was initially reluctant to talk to me, because she was afraid I'd present her in a negative way.

"The image of nationalists is not positive," she said.

She said she'd rather be called a "patriot" than a "nationalist." Maria said she was dreaming of "a global alliance" of nationalists including US President Donald Trump as well as French presidential candidate Marine Le Pen, who would jointly end an "attempt by globalists and liberals to dictate to people how they should live."

"I want her to win," Maria told me, referring to Le Pen. "She will be the new leader of Europe - and not Merkel!"

Putin plays the nationalist card to boost his popularity

But you don't have to be part of Putin's political machinery, or work for his party, in order to support him. I met many people - students, teachers, engineers - who say "yes" to Putin, because they credit him with making Russia a major player again on the international stage -  by invading Ukraine and "bringing back Crimea."

To them Putin is a strong leader who has restored national pride.

Recent protests across Russia show that not everyone is happy. Demonstrators deplore corruption and economic stagnation. But even among them you find those who support Putin's foreign policy.

So could the mood tip against Putin? Will dissent grow into something bigger and challenge the status quo in the run-up to Russia's presidential election in 2018? Or will Putin be able to silence those who are now taking to the street demanding an end to corruption and political stagnation, those who want to see an end of almost two-decades of Putin in power?

This year Russia commemorates the 100th anniversary of the 1917 Russian Revolution. Back then the Tsar was ousted in a matter of only a few days. But even Putin’s critics cannot say who could replace him. And it's this lack of alternatives combined with Putin's brand of nationalism that makes many Russians opt for the status quo.