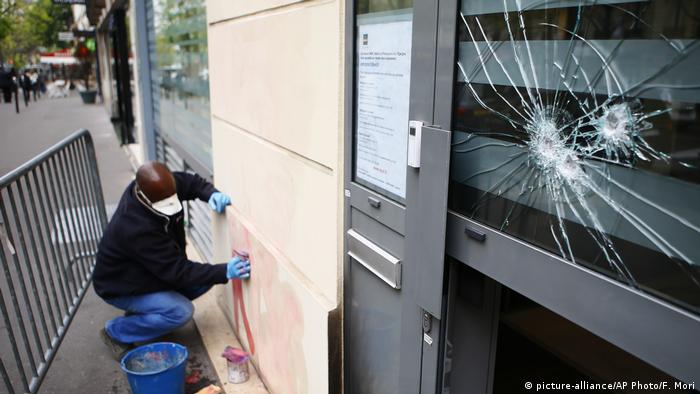 Firefighters were called to the scene on the Rue du Faubourg Saint-Honore in central Paris at about 2:40 am local time (0040 GMT). No one was injured in the incident, as the blaze was quickly extinguished. A police source said the cause of the fire was "not natural and probably criminal."

A fire department spokesman said that the fire had damaged only the door and a doormat. Police sources added that vandals had also sprayed graffiti against Le Pen's far-right Front National party on the building.

Read: Who would be the greenest French president?

A group calling itself "Fight Xenophobia" contacted the French Agence France Presse (AFP) news agency to claim responsibility for the attack, adding that it had been carried out with "Molotov cocktails."

The police said they had launched an investigation into the incident; however, Front National presidential candidate Marine Le Pen told public broadcaster France-2 television that investigators had not contacted her or her campaign.

"I assume this is due to a small leftist group," she said during the interview. "These groups act in total impunity," she added, saying that the government should endeavor to dissolve them.

French Interior Minister Matthias Fekl has meanwhile condemned the attack, saying "these are unacceptable acts. The democratic debate must take place in the ballot box."

"We have been in touch with the National Front candidate's team since last night and will see with them if it is necessary to strengthen security procedures."

Le Pen is considered a leading contender for France's upcoming presidential election, which will be held in two rounds on April 23 and May 7. Le Pen is running neck-and-neck with centrist candidate Emmanuel Macron.

French far-right presidential candidate Marine Le Pen has made her wish to withdraw from the euro currency a central theme of her recent speeches. She told business leaders not to be afraid of returning to the franc. (28.03.2017)