The robot named Fedor will test skills and aid astronauts on the International Space Station. A previous attempt to dock the Soyuz spacecraft had failed over the weekend. 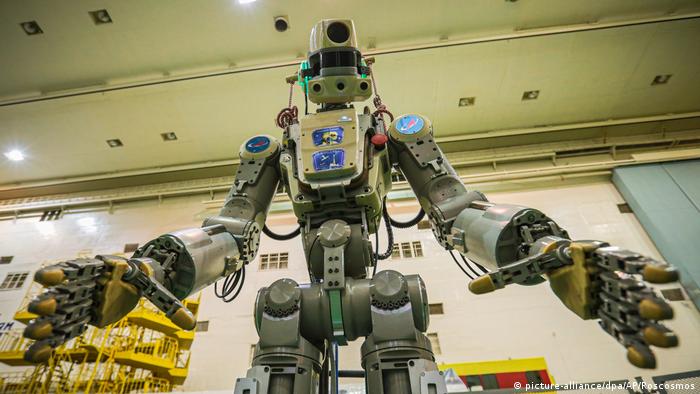 The Soyuz MS-14 had previously failed to dock on its first attempt over the weekend.

The robot will assist six astronauts onboard the ISS and stay until September 7.

The spacecraft is also carrying 670 kilograms (1,477 pounds) of scientific equipment and other goods to support life on the ISS.

The craft blasted off Thursday from Russia's Baikonur cosmodrome in Kazakhstan but failed to dock at the space station Saturday.

NASA said the docking problem had to do with an automated rendezvous system and not the Soyuz spacecraft.

The Russian android is not the first humanoid robot to travel to the ISS. In 2011, NASA sent up Robonaut 2, which stayed there for several years, returning to Earth last year because of technical problems. Japan also sent a 34-centimeter (13.4 inches) tall robot called Kirobo along with the station's first Japanese commander.

Astronaut Anne McClain has been accused of identity theft by her estranged wife. She allegedly accessed her partner's bank account from the International Space Station. (24.08.2019)

Space tourism takes another step towards reality with Virgin Galactic's mission control center. The facility aims to connect paying customers to the business of space travel before launching them into the final frontier. (16.08.2019)

NASA has sent mice to the ISS to learn more about the effects of microgravity and how humans would fare on long space trips like voyages to Mars. This most recent experiment is far from the first rodent space mission. (26.04.2019)

A long time ago, a galaxy not so far away merged with our own in a massive cosmic collision, scientists have discovered. The Milky Way's mass grew by over a quarter after the crash, speeding-up the formation of stars. (22.07.2019)