Russian gun activist pleads guilty to conspiracy in US court

Maria Butina has admitted to trying to set up illegal back channels between Russian agents and the Trump campaign. She has likely pleaded guilty in exchange for deportation to Russia, which maintains her innocence. 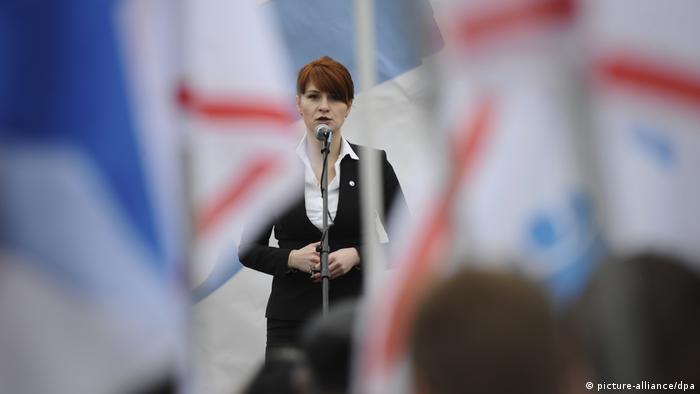 Accused Russian agent Maria Butina pleaded guilty to a conspiracy charge in a US court on Thursday after reaching a deal with prosecutors that could provide insight into Moscow's meddling in US politics. The 30-year-old, who was in the United States on a student visa, infiltrated the powerful National Rifle Association (NRA) gun lobby and made contact with many high-level Republicans.

Butina admitted that she "sought to establish unofficial lines of communication with Americans having power and influence over US politics."

To that end, she and her boyfriend, conservative US political operative Paul Erikson, used their ties to the NRA to try and set up meetings between Russian agents and then-presidential candidate Donald Trump. Butina's case, however, is separate from special counsel Robert Mueller's inquiry into possible Russian meddling in the 2016 US presidential election.

'They broke her down'

Butina has agreed to cooperate with investigators, likely in exchange for a promise that she'll be deported to Russia. Moscow has portrayed Butina as the victim of a witch hunt, saying that she only agreed to plead guilty because "they broke her down."

Her lawyer also supported this claim, saying the charge that she was operating illegally as a foreign agent was an exaggeration of meetings she had taken for networking opportunities. She had regular contact with several Russian intelligence officials and in one case had dinner with a diplomat suspected of being a spy.

Butina will remain in jail pending sentencing. While there are no strict sentencing guidelines for her specific crime, her lawyer estimated that she will spend at least six months in prison.

Her Russian gun rights group, which she used to establish a connection to the NRA, is financed in part by Alexander Torshin. Torshin is the deputy governor of Russia's central bank and has close ties to President Vladimir Putin.

Suspected Russian agent Maria Butina to be jailed until trial

Russian national Maria Butina has pleaded not guilty before a US court on charges of conspiracy to act in the interest of Moscow. Her attorney described the 29-year-old as an "innocent student." (19.07.2018)

The charges against Maria Butina relate to building relationships with officials and infiltrating organizations with influence in US politics. Court documents show her actions revolved around the 2016 election. (17.07.2018)