Russian elections are ′neither free nor fair′ | Europe | News and current affairs from around the continent | DW | 02.12.2011

Russian elections are 'neither free nor fair'

The Kremlin has ways of influencing the results of Russia’s parliamentary election. The aim is to do it in such a subtle way that you'd never guess that the vote was manipulated. 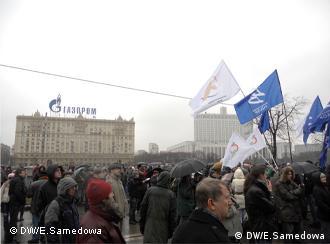 Protesting against Putin is definitely a minority activity

Activists have published an interactive map on the Internet, displaying a bunch of red circles with black numbers in the middle: 265, 119, or 25. These represent Russian cities and the number of reported irregularities related to the country's parliamentary election. This online project is being run by the independent election-observer organization Golos and the Internet newspaper Gazeta.ru. Russians can use it to report incidents related to the election. It is quick, anonymous and unfiltered.

So far, users have reported 3,500 cases of alleged biased reporting in the media, vote buying or supervisors in workplaces exerting pressure on their workers. St. Petersburg is top of the list of alleged irregularities ahead of the vote, with more than 200 reported.

Here is one reported on November 28: "The president of our university has told students who live in dorms not to vote in their hometowns but to take the buses laid on here to vote for United Russia. Anyone who doesn't agree to do so is threatened with expulsion. Students say the president is a member of the United Russia party." 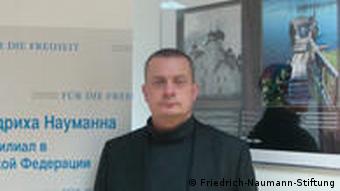 Sascha Tamm believes the cards are stacked against new parties

This is an example of the use of what are known in Russia as "administrative resources." They are being widely used ahead of this election, according to Sascha Tamm, project director with the Friedrich Naumann Foundation in Moscow.

There is a reason why Jedinaya Rossiya (United Russia) is commonly referred to as the ruling party. Public administration supervisors, mayors and heads of state corporations do what they can to influence their employees to support United Russia, Tamm says.

Opponents kept out in the cold

Experts like Sascha Tamm expect this election to reflect a trend observed over the past few years.

"The election will be neither free nor fair," he says. "I'm not talking so much about election day itself, although from what we can surmise, we expect there will be cases of manipulation then. But I'm talking more about what's been happening in the run up."

In other words, Tamm adds, the Kremlin doesn't need to manipulate the vote on a grand scale, because the result can be influenced in other ways.

To understand the Russian electoral process, you have to go back to 2005, when new legislation came into force. Since then, members of the Duma have been elected exclusively though party lists. This rules out any chance of independent candidates being elected to parliament. 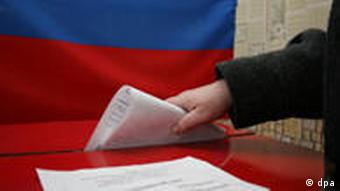 Those who aren't happy may vote with their feet

At the same time, the hurdle for a party to enter the Duma was raised. Now, instead of five percent, a party has to win at least seven percent of the vote in order for its members to sit in parliament.

To get onto the ballot, parties have to be officially registered at least a full year in advance.

"The registration process makes it difficult if not impossible for opposition parties to even get registered as parities," Tamm says.

They must, for example collect the signatures of at least 45,000 supporters, but at the same time, they must come from a particular mixture of Russia's regions. It was this legislation that tripped up the newly formed Party of People's Freedom. The justice ministry in Moscow refused to register it as a party on formal grounds.

All this means that no surprises can be expected when voters go to the polls this Sunday. The opinion polls confirm this: the same four parties are expected to make up the new parliament as made up the last one. United Russia is expected to win a clear majority of the votes. The only question is whether or not it will again win a two-thirds majority.

"What we have here is a system of regeneration, that regenerates the four parties represented in the Duma and sets up hurdles for any others that are impossible to overcome," Nikolai Petrov of the Moscow Carnegie Center argues.

It's no wonder then that many Russians can be expected to vote with their feet and stay away from this election. According to a poll conducted by the independent Russian polling center Levada, around 45 percent of those asked do not plan to vote. Almost one in three believes his or her vote simply doesn't matter.

Russian President Dmitry Medvedev has called for greater political competition in his country. However, this seems unlikely at present with only communists and parties close to the Kremlin having much chance of success. (29.11.2011)

Russia's prime minister and former president has officially accepted the United Russia party nomination for the country's presidency. Vladimir Putin is almost certain to win the ballot in March 2012. (27.11.2011)

With Russia's December parliamentary elections approaching, many discontent voters are turning to the Communist Party in their search for an alternative to Prime Minister Putin's conservative United Russia. (07.11.2011)