Her comics are chronicles of Russia's social and political conflicts. In an interview with DW, Moscow artist Victoria Lomasko discusses the confrontation between her country's Orthodox Church and Russian art. 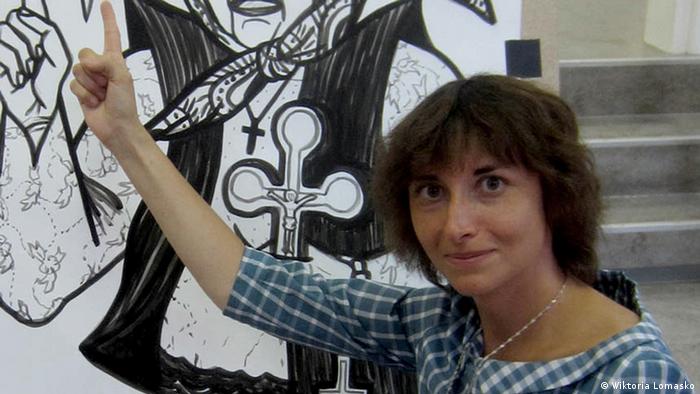 DW: In your book "Verbotene Kunst. Eine Moskauer Ausstellung" (Forbidden Art. A Moscow Exhibition), you document - with support from journalist Anton Nikolayev - the trial against the curators Andrei Yerofeyev and Yuri Samodurov. In an exhibition, the two men showed works that had been removed from Russian museums and galleries on political and religious grounds. An organization of Orthodox believers pressed charges against the exhibition for inciting religious hatred. Why did you draw pictures of the trial? 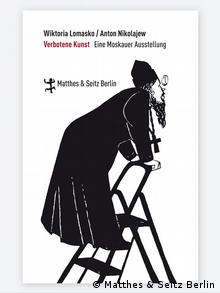 Victoria Lomasko: As a citizen, I was often compelled to pay attention to court cases. That was also true of the wrangling involving this exhibition. In addition, I got an incredible push as an artist: for the first time, I came in close context with Orthodox activists. Originally, I didn't at all want to attend the entire trial and ultimately publish a book. And I never would have pulled it off if it weren't for those activists. They inspired me. I even came to like them because they delivered so many wonderful and unbelievable scenes. I just sketched everything that I saw and wrote down everything I heard. It was incredible what they were saying! It was like being in the Middle Ages.

But it wasn't the last time you would meet Orthodox activists. What was your impression of the trial against the women in the Russian punk band Pussy Riot?

Everything that didn't quite get expressed during the trial on the forbidden art exhibition suddenly came to the fore. Back when the curators of that exhibition were in court, most observers still thought it was nonsense or just some accident. And many artists also saw Yerofeyev and Samodurov as provocateurs who only had themselves to blame. There were many critical articles and the view persisted that the exhibition really could be offensive.

And then came Pussy Riot. All of a sudden, it was the opposite. It wasn't the Orthodox activists imposing on contemporary art - it was contemporary artists who were upsetting believers with their so-called punk prayer in Moscow's Cathedral of Christ the Savior. It was incredible how much was going on at the Pussy Riot trial! The forbidden art curators' trial was attended by just a few journalists, primarily from abroad. But the Pussy Riot trial received extensive attention. It became clear to a broad public that the charges against the women rested on rules from the Dark Ages. Everyone was shocked. 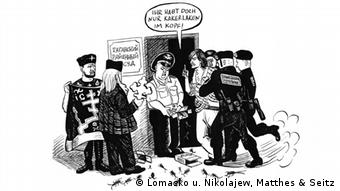 For a long time, it was unclear how the forbidden art trial would turn out. Many people didn't support Yerofeyev and Samodurov because they thought the two didn't really have anything to fear - maybe a fine in the worst case. But in the end it became clear that they might go to jail. As far as I know, they were spared prison time only because important people with political connections got involved. With the Pussy Riot trial, nobody made any secrets about the fact that the state is completely on the church's side, that the verdict had been decided in advance, that the true judges are called President Putin and Patriarch Kirill, and that a similar fate awaits anyone who dares to contradict the two of them.

All artists were made to understand, 'If you all dare to go too far, then we're going to take you on.' But that only encouraged artists to do more and to criticize further the increasing strength of the church, which is no longer separated from the state. In return, of course, the government is going to sharpen laws even more. 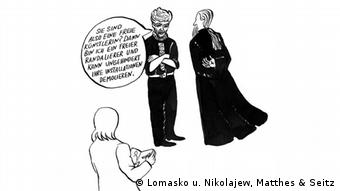 So you're not expecting to see peace made between the church and the contemporary art scene?

No. Even if we, as artists, didn't do anything or show works openly critical of the church and religion, people will attack our exhibitions and our world. The other side is the increasing self-censorship. Many gallery owners, curators and museum representatives don't even want to create an opportunity for those Orthodox censors to appear at their doorstep. They themselves no longer want to show certain works. Some people are using the situation to get press. Others are afraid of scandals and take cover in self-censorship. And even others want to become heroes by holding tight to the issue.

In which category do you fit?

In none of them at the moment. I definitely don't want to become a media figure. And I also don't think of myself as being forced to resort to self-censorship or turning myself into a heroine.

In a solo exhibition in Berlin's uqbar gallery, Victoria Lomasko's drawings of the trials relating to the forbidden art exhibition as well as Pussy Riot's protest prayer can be seen through April 14, 2013.

Three members of the Russian female protest band Pussy Riot were found guilty of hooliganism for their infamous punk "prayer." One has been given a suspended sentence – but now faces accusations of betrayal. (11.03.2013)

This year's 1LIVE Krone, a renowned award presented by German radio broadcaster 1LIVE, honors the courage of the Russian performers and activists. Two members of the band appeared in Germany to accept the prize. (06.12.2012)