This year's 1LIVE Krone, a renowned award presented by German radio broadcaster 1LIVE, honors the courage of the Russian performers and activists. Two members of the band appeared in Germany to accept the prize. 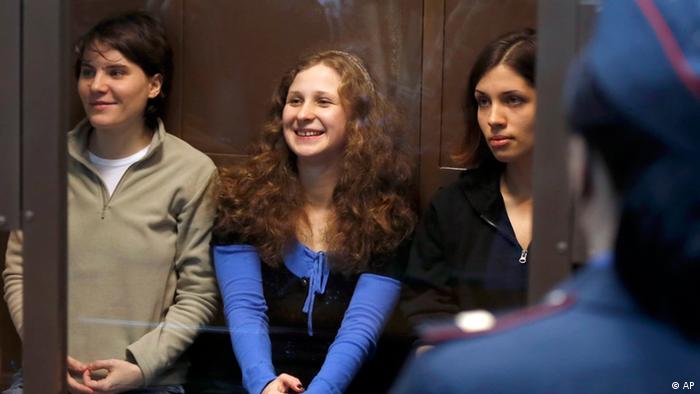 It bears mention right at the start: The women in Pussy Riot are not musicians, even if they are anchored in the public consciousness as punk rockers. Pussy Riot is one of many projects from the artist activist group "Voina" that counts numerous members, including men, and has been waging a desperate campaign against the Putin regime for years.

At the beginning of 2012, Pussy Riot estimated that it had 13 committed members and dozens of helpers. The group's appearances in late 2011 and early 2012 were widely noted socially, though not particularly for the musical quality of their songs.

Youth broadcaster 1LIVE doesn't intend its award as recognition for the few songs that the group has written in its short history.

"Even in the past, we've awarded the 1LIVE Krone to artists who weren't musicians," said programming director Jochen Rausch in an interview with DW. "The Russian band attracted worldwide attention with their actions. We thought that worthy of a prize because pop music also has the function of attracting an immense public." 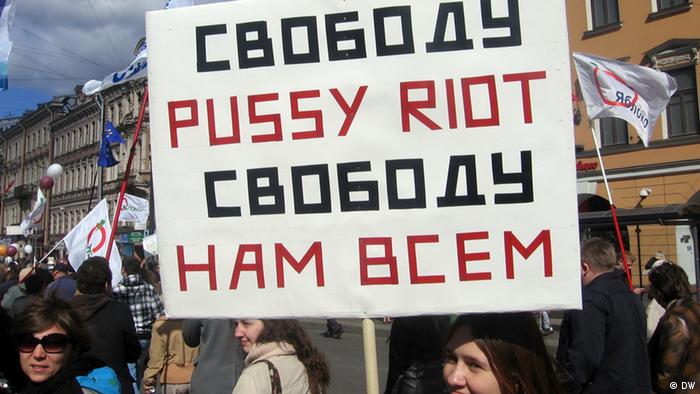 Demonstrators in St. Petersburg demand the release of the band's members

The award is a gesture of solidarity with the members of the group who are in prison.

"The verdict against Pussy Riot is disproportionately severe and does not cohere with the European conception of rule of law and democracy, as Chancellor Merkel agrees," Raush said, adding, "But keeping the discussion about the prison sentence going is only possible if people do things to draw public attention."

Two women from Pussy Riot attended the 1LIVE Krone award ceremony in the evening of December 6 in Bochum. For security reasons, their names have not been released, and they appeared on stage with hoods over their faces to conceal their identities.

The artist collective Pussy Riot formed in fall 2011 after Vladimir Putin announced that he would again run for president after serving as prime minister. The band members had earlier been active in the protest movement and art scene surrounding the group Voina, which translates to "war." Voina is credited with a long list of provocations, like painting a 17-meter-high (56-foot) erect phallus on the Liteiny drawbridge in St. Petersburg, in direct view of the offices of Russia's Federal Security Service.

In summer dresses and colorful stockings, the masked women of Pussy Riot took their performances to public venues in Moscow like the historic execution site at Red Square. Their Russian songs with titles like "Release the Cobblestones" and "Down with Prison, Freedom for Protests" demanded free elections and the resignation of President Putin, whom the feminist punk rockers regard as a symbol of Russian machismo.

'Mother of God, Rescue us from Putin!'

On February 21, 2012, the women tried to get material for their new video in Moscow's Cathedral of Christ the Savior. Various participants jumped on the steps of the altar while others filmed them. In total, the action lasted 41 seconds. 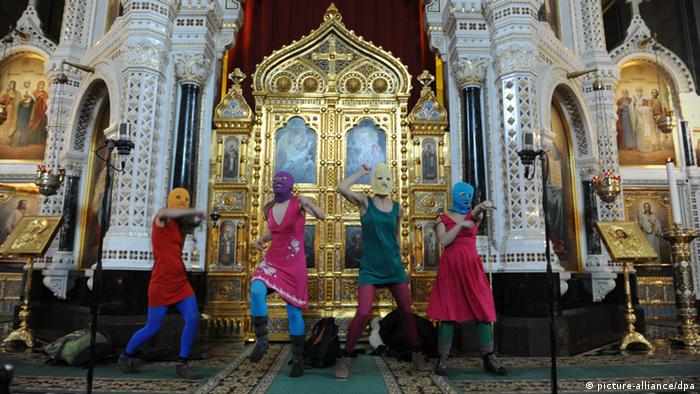 The film clips were later used in a video published on YouTube for the song titled, "Mother of God, Rescue us from Putin!" The song lyrics take up the close relationship between the Kremlin and the Russian Orthodox Church. "The patriarch believes in Putin. But he'd do better to believe in God - that swine," the group sings.

A harsh sentence, a flood of prizes

In early March 2012, three women in Pussy Riot were arrested and sentenced to two years in a penal colony as part of a trial that observers like Amnesty International described as having the characteristics of a show trial.

The verdict: hooliganism motivated by religious hatred. One of them, Yekaterina Samutsevich, was released on probation. Nadezhda Tolokonnikova and Maria Alyokhina, students at Moscow universities and mothers of small children, are serving their sentences in labor camps. There are reports that the young women have been subject to bullying by fellow inmates. 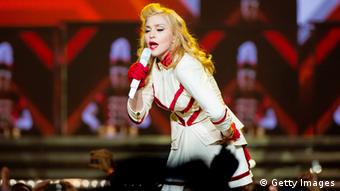 Madonna has declared her support of the Russian activists

Given their situation, shows of solidarity from abroad are not to be underestimated, even if they cannot directly change things. Alongside the 1LIVE Krone, Pussy Riot may also be up for other prizes, including the Luther Prize awarded by the German city of Wittenberg or the European Parliament's Sakharov Prize for Freedom of Thought. The group was also nominated for the Kandinsky Prize, the most renowned among Russian art awards.

Pop icon Madonna voiced solidarity with the group during a 2012 performance in Moscow. Other artists like Max Herre and Peter Gabriel have come out in protest of what they called the severe punishment facing the group.

Was Pussy Riot's punk prayer in a cathedral blasphemy, or a courageous political protest? And does the band deserve a prestigious German award? The question has led to heated debate among theologians and politicians. (09.11.2012)

From charges of election fraud to a harsh sentence for Pussy Riot members, recent months have seen ample tension in German-Russian ties. As leaders from both countries begin talks, DW looks at the chronology of events. (17.11.2012)

Two members of the Russian punk band Pussy Riot are doing time in remote labor camps, which may become home to many more opposition members. Former inmate Svetlana Bakhmina spoke to DW about life in the camps. (16.11.2012)