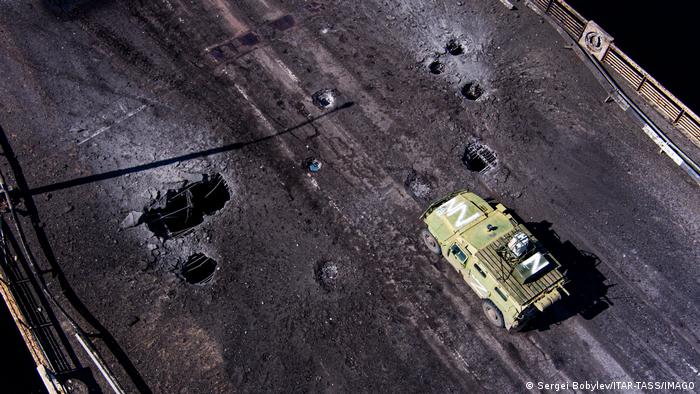 The UK Ministry of Defence said Ukraine's counteroffensive in Kherson "is gathering momentum," and that its "highly likely" forces have managed to establish a bridgehead south of the Ingulets River.

Ukraine has used "new long range artillery to damage at least three of the bridges across the Dnipro (Dnieper) River which Russia relies up to supply the areas under its control," the ministry said in their latest intelligence briefing.

The intelligence update stated that Russia's 49th Army is stationed on the western bank of the Dnieper River and "now looks highly vulnerable."

Kherson city, which is the most significant center controlled by Russia "is now virtually cut off from the other occupied territories," UK officials said.

UK intelligence noted that the loss of the city would "severely undermine Russia's attempts to paint the occupation as a success."

The area in southern Ukraine has effectively been under Russian occupation since the first days of the war against Ukraine.

Here are the other main headlines from the war in Ukraine on July 28.

A Syrian cargo ship, sanctioned by the United States, docked in the northern Lebanese port of Tripoli carrying barley and wheat that the Ukrainian embassy in Beirut said was stolen.

"The ship has travelled from a Crimean port that is closed to international shipping, carrying 5,000 tonnes of barley and 5,000 tonnes of flour that we suspect was taken from Ukrainian stores," the embassy said.

Ukraine has accused Russia of plundering grain and steel from its territory since Moscow invaded the country in late February.

A former Russian state TV journalist has been found guilty of discrediting the armed forces and fined 50,000 roubles ($822, €806).

Marina Ovsyannikova publicly opposed Russia's actions in Ukraine in social media posts stating that those responsible for the war would find themselves before an international tribunal.

In March the former journalist received international attention when she appeared during a live news bulletin holding up an anti-war poster. At the time she was briefly detained and then released with a fine.

In an address to the court, Ovsyannikova said she did not understand why she was there and what she was being judged for.

"The purpose of the trial is to intimidate all the people who oppose the war in the Russian Federation."

She described Russia as an aggressor and said: "The beginning of this war is the biggest crime of our government."

Sanctions on Russia are taking a heavy toll on the economy, despite Moscow's assertion that the country is not feeling the pinch, according to a new study from Yale University.

The authors claim their work casts doubt on Moscow's claims that the economy remains robust and that the West is suffering more through "a war of economic attrition."

They found that Russia's position as a commodities exporter had been irreversibly eroded, having been forced to switch from its main markets in Europe toward Asia.

The study said Russian imports have largely collapsed since the war began, and that the country is facing stark challenges securing crucial inputs, parts, and technology.

No agreement yet on US-Russia prisoner swap — Kremlin spokeswoman

Russia's Foreign Ministry says there has been no agreement on a possible prisoner exchange. Spokeswoman Maria Zakharova said that a "concrete result" had not been reached as yet.

On Wednesday US Secretary of State Antony Blinken said that he would talk to Russian Foreign Minister Sergey Lavrov in the coming days about the release of US basketball player Brittney Griner and former soldier Paul Whelan in exchange for Russian arms dealer Viktor Bout.

Griner was arrested in Moscow in February for possession of hashish oil and is currently on trial.

Kyiv Governor Oleksiy Kuleba said Russian forces had launched missile strikes on Kyiv and Chernihiv, areas in Ukraine that have not been targeted in weeks.

Kuleba said on Telegram that infrastructure was hit in the settlement of Vyshgorod, with it not being immediately clear if there were any casualties.

"Russia, with the help of missiles, is mounting revenge for the widespread popular resistance, which the Ukrainians were able to organize precisely because of their statehood,'' Kuleba said on state television.

Over 75,000 Russians killed, wounded since invasion began — US lawmaker

A US lawmaker has told news network CNN that more than 75,000 Russian soldiers have been killed or wounded since the invasion began on February 24.

Democrat Elissa Slotkin spoke to the broadcaster following a classified briefing with officials from the Biden administration.

"We were briefed that over 75,000 Russians have either been killed or wounded, which is huge, you've got incredible amounts of investment in their land forces, over 80% of their land forces are bogged down, and they're tired," Slotkin said.

What impact are HIMARS launchers and Gepard tanks likely to have?

A week ago the head of the CIA estimated that about 15,000 Russian troops had lost their lives in Moscow's war against Ukraine.

The estimate was delivered by the US intelligence agency's director, William Burns, during a security conference in Aspen, Colorado. Burns added that around 45,000 are thought to have been wounded.

Russia has reponded to the latest figures given by Slotkin, saying they're "fake."

"These are not data from the US administration, but publications in newspapers," Kremlin spokesperson Dmitry Peskov said. "In our time, not even the most solid newspapers are afraid to spread all kinds of fakes. Unfortunately, this is a practice we are seeing more and more often."

The coach of Ukrainian football side Dynamo Kyiv has condemned the behavior of  fans from Turkish club Fenerbahce, during a Champions League qualifier.

Fans from the Turkish club chanted Russian President Vladimir Putin's name during the encounter in which the Ukrainian side won 2-1.

"The game went well but we didn't factor in the fans. I didn't expect such chants — they were deplorable," Mircea Lucescu told Turkish publication Fanatik after skipping the post match press conference in protest at the behavior of fans.

The Ukrainian team has only been playing friendly games in Europe since the Russian invasion, with the local league currently suspended because of the war.

Hundreds of thousands of Ukrainian refugees have arrived in Germany since the Russian invasion in February. They were promised access to housing, financial support and the job market. DW looks at the poor job prospects facing Ukrainians who have fled the war.

The US is expected to press Russia on a proposal to release jailed Americans in what will be the first discussion since Russia's invasion of Ukraine began. Click here for more on that story.