After threatening to veto a Western and Arab-backed measure to address the humanitarian crisis in Syria, Russia has presented its own rival resolution. The move comes amid stalled peace talks. 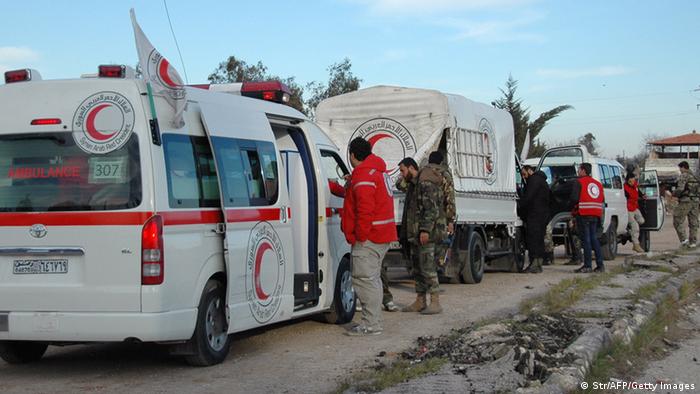 Russia's UN ambassador, Vitaly Churkin, reportedly presented the other four permanent members of the UN Security Council - the United States, the United Kingdom, France and China - with a draft resolution on Syria's humanitarian crisis, according to a diplomatic sources speaking on the condition of anonymity.

The new draft aims to facilitate the delivery of aid to Syrian civilians and reportedly includes other items from the original Western and Arab text. However, it excluded an earlier provision which required Syrian President Bashar al-Assad's government to resign.

Envoys from the Security Council were scheduled to meet on Thursday "to try to merge the two texts", according to one diplomat.

"It seems like the Russians are ready to talk," the diplomat added.

The five-member council is seeking to end the siege of Homs, one of Syria's most embattled cities, and to improve humanitarian access in other cities.

This week, Russian Foreign Minister Sergei Lavrov criticized the original UN draft resolution for failing to address the growing threat of terrorism in the wartorn country, in addition to providing an ultimatum for the Assad regime's departure.

Western leaders allied with the Syrian opposition have criticized Moscow's persistent support of the Assad regime during the civil war. Russia has used its veto power as a permanent Security Council member several times in order to hinder other council members from taking action against Damascus.

The humanitarian crisis in Syria worsens daily. As delegations from Syrian President Bashar al-Assad's government and the Syrian opposition fail repeatedly to make progress in peace negotiations in Switzerland, Syrians remain trapped in besieged cities, such as Homs where an evacuation is currently underway. Civilians across the war-torn country face widespread food and medicine shortages.

The armed conflict, which began in March 2011, has led to the internal displacement of millions. Over two million more have fled into neighboring Middle East countries, placing a strain on their own resources.

The Syrian Observatory for Human Rights reported on Wednesday that more people have died since the start of peace talks on January 22 than during any other comparable period of the war. According to its own figures, on average 236 people have died daily during the three weeks.

Where the first round of talks between Syrian government and opposition delegates in Geneva aimed to lay down the frame for a political solution to the conflict, now they are looking at how to implement it. (10.02.2014)