Moscow has failed to meet a deadline for over $40 billion in outstanding debts, as Western sanctions squeeze the Russian economy. The Kremlin has downplayed the news, insisting it has enough to pay what it owes. 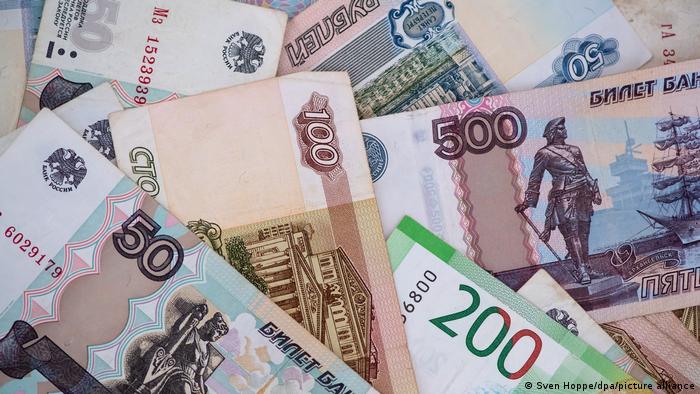 Russia was set to fall into its first state of sovereign default in over a century on Monday, after a grace period following a deadline to pay interest on some $40 billion in outstanding bonds lapsed the day before.

The Kremlin, for its part, has said the default label is artificial, as it has the funds to pay its debt but it unable to access its foreign reserves due to Western sanctions.

"Statements of a default are absolutely unjustified," Kremlin spokesman Dimitri Peskov said on Monday in a call with reporters, saying the money was with financial agents, Euroclear.

"The fact that Euroclear withheld this money and did not bring it to the recipients is not our problem. There are absolutely no grounds to call such a situation a default," Peskov said.

"There is money and there is also the readiness to pay," Russian Finance Minister Anton Siluanov said last month of the looming default, calling the situation "artificially created" by "unfriendly" powers.

The default status is also unlikely to affect the lives of ordinary Russians, already struggling with soaring inflation and steep economic recession.

Despite this, the default status is likely to dissuade investors even further from bringing any money into Russia, which has become a political and financial outcast since its invasion of Ukraine in February. It will also raise Moscow's borrowing costs in the future.

Under normal circumstances, investors and the defaulting government typically reach a settlement in which bondholders are given new bonds that are worth less but that at least provide partial compensation. But sanctions forbid negotiating with the Russian Finance Ministry, and with no end to the war in sight there is no way to say how much the defaulted bonds will end up being worth.

Last Wednesday, Russian President Vladimir Putin signed a decree to launch temporary protection procedures and give the government 10 days to choose banks to handle payments under a new scheme, suggesting Moscow plans to pay bondholders back in rubles regardless of what currency the debt is owed in.

Default unlikely to have international effect

Investment analysts have said the default, while problematic for the Kremlin, is unlikely to wreak havoc on global markets. Kristalina Georgieva, managing director of the International Monetary Fund, has called the event "not systemically relevant."

The turn of events will likely mean serious losses for any international businesses left engaging with the Russian economy, such as funds that invest in emerging markets. Russia, however, played only a small role in emerging market bond indexes before the war, limiting the losses to fund investors.

Russia has not been in a state of default since the 1917 revolution that created the Soviet Union. Although the breakup of the Soviet Union in the 1990s brought it close to default, international aid, particularly from the United States, was able to help Moscow avert total financial disaster.