Moscow has yet to give up on a political settlement to the conflict in Syria, a Kremlin spokesperson says. Amid escalating violence in Aleppo, the US and UK have accused Russia of possible war crimes. 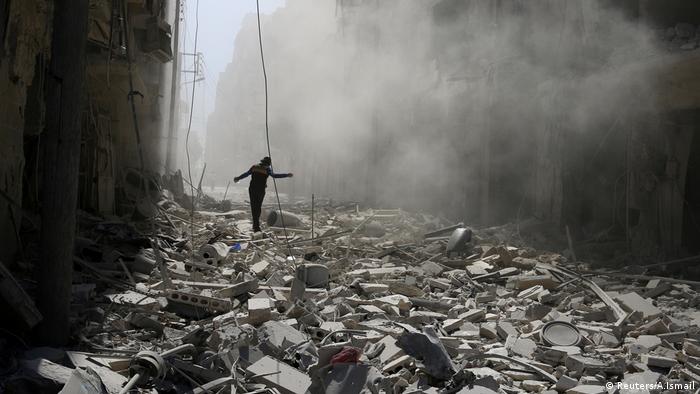 Russia's Syria: No end in sight

In 2015, Russia launched a military campaign aimed at bolstering Assad's grip on power. But after a year, the conflict is raging on with no end in sight. Has Moscow reached its objectives?

Rebels have retaliated by closing water pumps for government-held areas of Aleppo, affecting 1.5 million people. The UN has called on all parties to "stop attacks on water infrastructure," considered a war crime. (24.09.2016)

The Kremlin on Monday retaliated against the US and Britain for accusing Russia's military of war crimes in Syria during an emergency UN Security Council meeting.

"We note the overall unacceptable tone and rhetoric of the representative of the United Kingdom and the United States, which can damage and harm our relations," Kremlin spokesman Dmitry Peskov told reporters in the nation's capital.

At the meeting, British Foreign Minister Boris Johnson said the bombing of an aid convoy last week would "constitute a war crime" if intentional, adding that the assault on Aleppo was "absolutely barbaric."

Syrian government forces backed by Russian airstrikes on Thursday launched a vicious assault in Aleppo in a bid to uproot rebels from the eastern part of the city.

The latest escalation of violence comes after a ceasefire brokered by the US and Russia collapsed last week.

"Terrorists are using the ceasefire regime to regroup, to replenish their arsenals and for obvious preparations to carry out attacks," Peskov said.

"(But) Moscow is not losing the hope and political will to use maximum efforts to reach the point of political settlement in Syria," he added. "So far, it's been hard."

Syrian Foreign Minister Walid al-Moallem told the Mayadeen TV channel that the US-Russia brokered ceasefire was still a viable option for halting hostilities, adding that Assad's administration is prepared to take part in a unity government.

The UK-based Syrian Observatory for Human Rights on Monday reported that more than 120 people were killed in rebel-held Aleppo - nearly all civilians - since the army launched its military offensive.

Ahead of the UN Security Council meeting, UN Secretary-General Ban Ki-moon condemned the assault on Aleppo, calling it the "most sustained and intense bombardment since the start of the Syrian conflict" in 2011.

More than 300,000 people have been killed and half the population displaced since the conflict erupted in 2011, when government forces launched a brutal crackdown on peaceful protesters calling for Syria's president to step down from office.

Multiple ceasefires and peace talks have failed to solidify a political solution to the conflict despite efforts from the international community.