Russia brings back children of IS fighters from Iraq

Moscow is transporting Russian children of "Islamic State" fighters back to their homeland from Iraq. A group of 30 children left Baghdad on a special flight, accompanied by Russian doctors, psychologists, and rescuers. 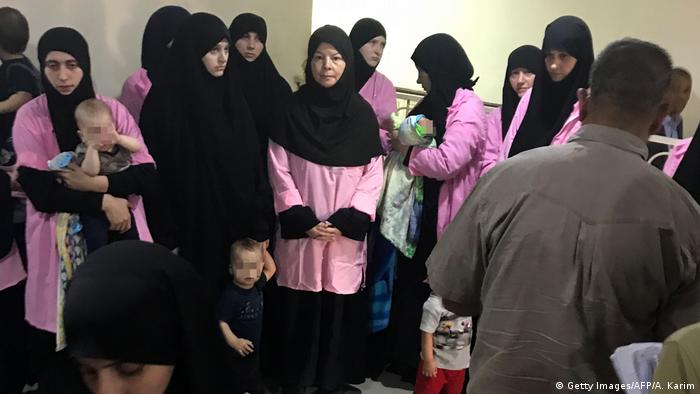 The first flight carrying Russian children of "Islamic State" (IS) militants landed in Russia after leaving Baghdad on Sunday.

The group included 16 girls and 14 boys aged between 3 and 15, Russian officials said.

Out of 30 minors on board the flight, 24 were from the Muslim-majority Russian state of Dagestan, three from Chechnya, one from the southwest city of Penza and one from Moscow, said Chechnya strongman Ramzan Kadyrov in an online post.

He later added that the effort to retrieve Russian citizens would not be stopped "as long as there is one more child and one more woman in Iraq and Syria."

With IS virtually purged from most of its former strongholds, many foreign-born militants are dead or imprisoned in Iraq and Syria. Governments have been hesitant to repatriate their family members for fear of importing terrorism.

On Friday, Kadyrov announced that the first group of Russian children would arrive to Moscow on Sunday evening. The former guerilla leader said the move was a result of a "titan effort" ordered by Russian President Vladimir Putin. Russian authorities have worked on resolving the issue for a whole year, he added.

The Chechen president also said that details had been kept quiet because "every word or unguarded step could harm the effort."

On Sunday, the children boarded a special plane deployed by the Kremlin's emergency ministry. They were accompanied by a team of Russian doctors, psychologists, and rescue workers. Russia's children rights' representative Anna Kuznetsova was also on board.

Kuznetsova met Iraq Prime minister Adel Abdul-Mahdi and thanked the Iraqi authorities for their "understanding and cooperation," according to a statement from her office.

"After examination, the children were placed on the plane and fed," officials added.

Earlier on Sunday, the plane delivered aid items gathered by by the Russian families of the stranded children, including clothing, toys and over 70 kilos (154 pounds) of candy.