Ruslana: 'There is no way back'

Ruslana, Ukraine's winner of the 2004 Eurovision Song Contest, has cancelled her concert tour to Belgium. Instead, she joined the ranks of protesters on Kyiv's Independence Square, where DW met the activist. 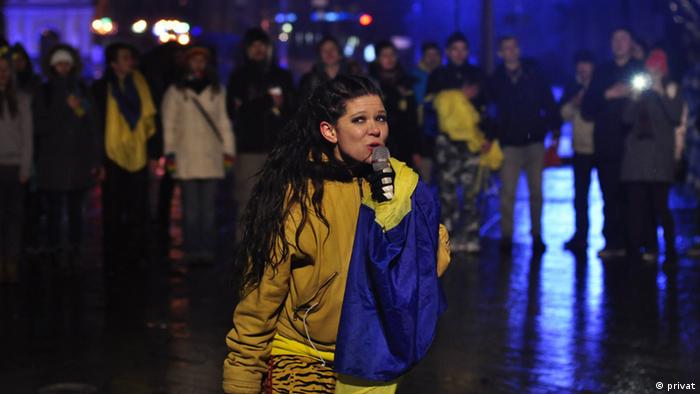 DW: What is your biggest concern if you look at the tense political situation in Ukraine?

Ruslana: At the moment, we're very outraged, very agitated and caught up by emotions because we see with our own eyes how audacious the government is acting. It can't be described. They are criminals! You can't imagine that these people are in power although their partly criminal past is known. I never imagined they would go this far. I remember the Orange Revolution, when not even President Leonid Kuchma called in security forces. He didn't dare take action against his people like that. Nothing is sacred to the people who give the orders nowadays. There is no way back. We can only protect ourselves if we terrify them with our united protest. Then, they'll run off. Or, they'll imprison us and beat us up.

Will those responsible for the police violence against demonstrators on November 30 be punished?

We won't allow the government to simply forget about these crimes. We ask those who were on Independence Square - the Maidan - on that terrible night, and were beaten by security forces, to go to the Independence Memorial and turn to us. We have volunteers who can help them press criminal charges for attempted murder! The documents can be completed with the help of lawyers. Then, the authorities must react.

What prompted you to become active on the Maidan? After all, you're primarily a singer.

I'm one of the volunteers here. I've only sung twice. I can't sing at the moment. First of all, I've lost my voice because I'm always reading statements by the people out loud, and secondly, from the start, I've also spent nights on the Maidan. I know that if the demonstrators stay overnight, twice as many people will show up the next morning. It's a simple example for how one can empower people emotionally.

Why are you protesting against the government and its decision not to sign the association agreement with the EU?

You know, it's simple human intuition; there's no logical explanation for some things. You sense what you have to do. We are all aware that we are surrounded by troops equipped with military technology, by strange, aggressive fellows - you really have no idea where they were trained. You don't even know whether they really belong to the security forces, or have just dressed like security officers and actually belong to other structures. This is not the time to withdraw, let's not even think about it. We are in danger. Our safety is in our hands.

Concerning the safety of young protesters: when you urge them to come to the Maidan, do you feel responsible for them?

That night, during the brutal crackdown, I really did feel a moral responsibility. The young people saw I was there at night, maybe that's why some of them stayed, too. I really urge everybody to stay together at this point, don't disperse, but try to provide for safety together. Let's close ranks and keep up a peaceful blockade of the government. They'll only back off in the face of a great number of demonstrators. Only then will they have to remain inactive, and one after the other, they'll lose their nerve, resign and step down.

Ruslana won the 2004 Eurovision Song Contest. It was the first time Ukraine won the European competition and that same year, the singer was one of the figureheads of the Orange Revolution. In 2012, she initiated a human rights campaign against injustice and judicial arbitrariness in Ukraine.

How Russians living in Ukraine are being turned into illegal immigrants 01.10.2022

When the war began, Ukrainian authorities stopped extending Russian citizens' residency permits. Since then, their status has become unclear and many face deportation. DW spoke with some of those affected.