In what's being labeled as a crucial speech, Republican presidential candidate Mitt Romney has laid out his foreign policy. Despite criticism for Obama, Romney had little to offer in terms of alternatives. 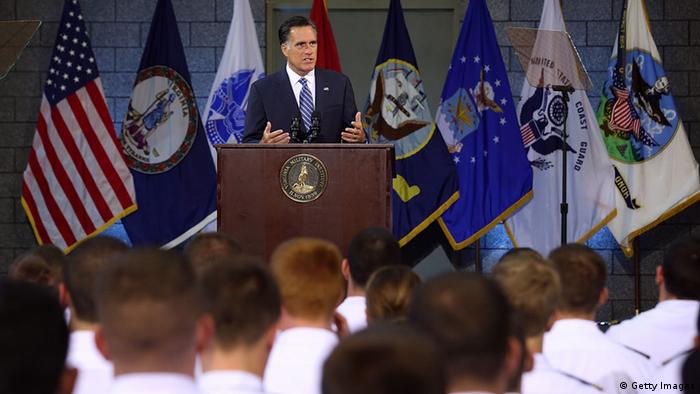 In what was his seventh foreign policy speech, Republican presidential candidate Mitt Romney presented himself as a moderate conservative who strongly criticized the policies of US President Barack Obama, but made few concrete proposals of his own. The central point of his 20 minute speech was the attacks on US missions in Cairo and Benghazi. The Libyan attack cost the lives of the ambassador and three other US citizens.

These attacks, Romney said were "the expressions of a larger struggle that is playing out across the broader Middle East, a region that's now in the most profound upheaval in a century." Romney covered the protests in Iran, Tunesia, Egypt and Yemen as well as Iraq Afghanistan Libya and Syria. The Obama government might not be directly to blame for the death of the four Americans in Benghazi, Romney said, but he claimed it was the administration's political failure that had created the climate for the attacks.

"It is our responsibility and the responsibility of the president to use America's greatest power to shape history, not to lead from behind, leaving our destiny at the mercy of events," Romney told his audience, insisting that it was in that respect that Obama had failed. 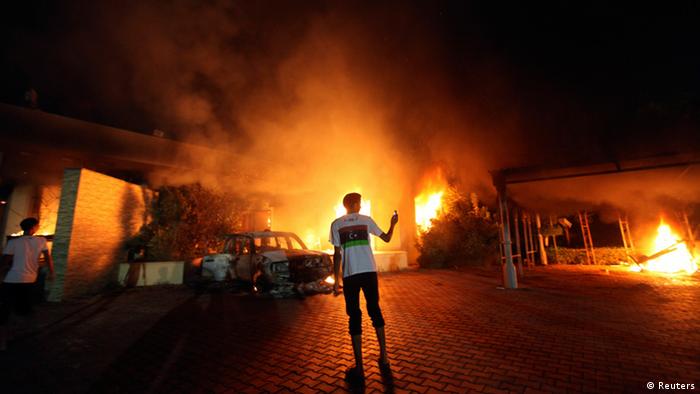 "Hope is not a strategy," Romney explained, but himself remained vague when it came to what he would do differently in foreign policy matters should he be elected president. Isolating Iran and beefing up sanctions, pulling out of Afghanistan, cooperating with Israel militarily while seeking a two-state solution - those are all points that the Obama government also pursues. Only recently, Romney had said the Palestinians were not willing to pursue peace and work towards a solution of the Middle East conflict. The statement led to hefty criticism, and Monday's speech was an attempt to calm the waves on the issue.

With regard to Syria, Romney called for arming the rebels but left it unclear who exactly should provide them with weapons. The Republican presidential hopeful merely said he wanted to "work with our partners to identify and organize those members of the opposition who share our values. And then ensure that they obtain the weapons they need to defeat [Syrian President] Assad's tanks and helicopters and fighter jets."

A longing for US leadership?

Romney stated that Obama had not signed any free trade agreements in the past, but that could be easily disproved. In October 2011, the president signed an agreement with Panama, Columbia and South Korea. Romney also mentions that there was a longing for American leadership in the Middle East and other parts of the world, and that "the 21st century can and must be an American century." 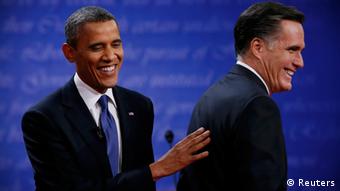 In the first of their TV debates, Romney did better than Obama

Madeleine Albright, long time US foreign minister under President Bill Clinton, described Romney's speech as "an awful lot of rhetoric, but when you get to the specifics you don't get the sense that he knows exactly what tools to use and how to operate within an international setting and what the role of the United States is in the 21st century." Albright criticized that Romney once again had made Russia into a major opponent, giving his speech an inappropriate "a cold war tone," when in fact, Russia was very helpful in the international efforts against Iran.

Romney back on track

Romney's plan to make foreign aid dependant on conditions - for instance in Egypt - was already in place, Albright said, but warned against putting too much pressure on the government in Cairo as it would then "look again as if they are just responding to our orders and not to the people that elected them."

Mitt Romney will have the chance to pick up his foreign policy plans in the coming TV debate with Barack Obama. In the debate last week, Romney cut a good figure against a weak performance by Obama. Romney's campaign, which seemed to be somewhat derailed by a couple of foreign policy gaffes, seems to now be back on track again. But first, the next TV duel will be between the two vice presidential candidates - Romney's Paul Ryan and Vice President Joe Biden are to scheduled for a TV debate on Thursday.

In Focus: Race for the White House

Americans head to the polls on November 6 to vote for the next president of the United States. Barack Obama and Mitt Romney are fighting a neck-and-neck race. DW looks at the candidates and key issues of the campaign. (08.10.2012)

Mitt Romney wanted to take over Barack Obama's position with economic arguments. But his own mistakes, fickleness in many issues and vying for the votes of the ultraconservatives in his party weakened his position. (08.10.2012)