Romania: Orthodox Church washes its hands of baby′s baptism death | Europe | News and current affairs from around the continent | DW | 09.02.2021 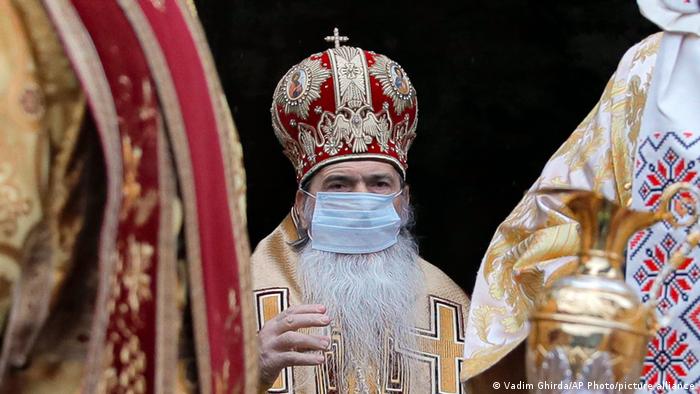 One of the most polarizing figures within Romania's Orthodox Church is Archbishop Teodosie (above).

Thrice, the priest fully immersed the 6-week-old baby in the water in the baptismal font. At first the child cried, then it became still, then its lips turned blue. The worried parents called the paramedics, and the baby was rushed to the intensive care unit of a hospital, where he died the following day. At the autopsy, 100 milliliters of water were found in the baby's lungs, a doctor said.

The baptism that led to the child's death took place in the northern Romanian city of Suceava on a Sunday in late January. The case attracted major media attention: reporters have interviewed the distraught parents, and the police are investigating the priest who performed the baptism ceremony for manslaughter.

But the Romanian public sees the Suceava baptism as more than just a shocking, isolated incident. The baby's death has sparked a fierce debate in the country about how baptism ceremonies are conducted. More than 60,000 people have meanwhile signed a petition calling for the abolition of immersing babies in the baptismal font. 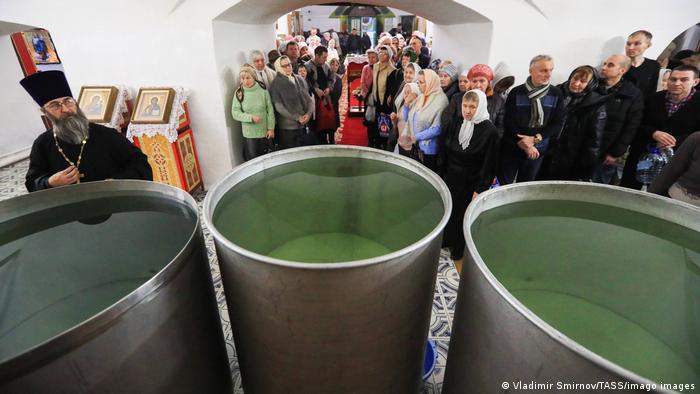 The Orthodox Church performs baptisms by fully immersing those to be baptized in fonts like those seen here in a church in Vologda, Russia

The baby's death has also triggered a general discussion about the often controversial social role of the Romanian Orthodox Church (BOR). "The tragedy of the baby from Suceava is not just about a priest and the rituals of the church, but about society in general," writes Ioana Ene Dogioiu, a well-known Bucharest publicist.

Almost all ethnic Romanians in Romania are Christian Orthodox. Most are not very devout, but especially in rural areas, they often have quite a traditionalist mindset. More often than not, what the priest says, matters.

Their faith has a complex background, including the fact that historically, there never was a separation of church and state like that experienced in Western European countries. Romania's 1923 constitution still has the Orthodox Church as a kind of state church with primacy over all other churches. Rankings of institutions that enjoy the most trust have for decades listed the church in one of the top places.

The Romanian Orthodox Church still claims a strong say or even a kind of directive authority in many sectors, including in family and education policies. It often represents anti-liberal, Christian fundamentalist and anti-modernist positions — positions that often polarize, like in the case of the baby that died.

Teodosie Petrescu, the archbishop of the Archdiocese of Tomis in southeastern Romania and one of Romania's most conservative church leaders, has been the most vocal in promoting the Orthodox Church. He has attracted public attention with several scandals, is said to have once been an informant for the Securitate secret police, and has repeatedly been on trial in recent years for corruption, false testimony and fraud. He was acquitted every time.

Teodosie rejects calls to allow babies to be sprinkled with water instead of being immersed three times during baptism. Immersion has been practiced for two millennia and will continue for the next 1,000 years, the archbishop told the right-wing nationalist TV broadcaster, Antena3. He said he baptizes babies in cold water because it "sharpens" them spiritually while it also prevents them from catching colds as they grow older.

Indirectly, Teodosie blamed the parents for the baby's death, saying it could not have swallowed any water at all during the brief immersion, possibly the parents had "overfed" the child that had then suffocated on its mother's milk.

Teodosie's outlandish views have been making headlines for years. He is considered the leader of the church hardliners and Orthodox fundamentalists. The official position is a bit more lenient in the case of the dead baby: Under certain circumstances, it is permissible not to immerse a baby, according to the BOR spokesman, Vasile Banescu, who added the ceremony could be postponed for health reasons. 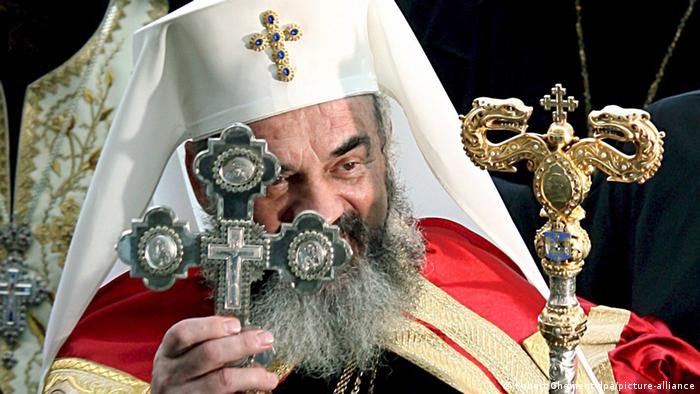 Under Patriarch Daniel, the Orthodox Church tries to avoid courting controversy, not always to good effect

The church leadership under Patriarch Daniel often keeps a low profile on sensitive issues or chooses less controversial words, but it nevertheless stands for a Christian fundamentalist and anti-modernist course.

In 2018, the church organized a homophobic "Referendum for the Family." It was invalid because fewer than 30% of the population participated — but three and a half million people voted in favor of the initiative. The church leadership has for many decades tolerated part of the clergy glorifying the Christian Orthodox fascist Legion movement of the interwar period, which was responsible for anti-Semitic crimes.

What would have been unthinkable in previous years is a debate critical of the Orthodox Church that has developed as a result of its polarizing positions. Commentators and intellectuals have been targeting the ties between the state and the church as well as the corruption scandals involving priests.

In the case of the baby that died after the baptism, well-known publicists say it is high time the Orthodox Church embraces the 21st century. One of the most outspoken was Mihai Sora, a 104-year-old philosopher and essayist, who wrote on Facebook that "a newborn is a fragile creature, a bundle of life and light, not a lump of flesh that you can twist and turn until you think you've done your  'job.'"

Serbia leads Europe's vaccination campaign - Dutch freeze international adoptions after abuses uncovered - The race to adapt vaccines against COVID-19 variants - The death of a baby during an immersion baptism sparks debate in Romania - Student protests pose a new threat to the Turkish president - New figures reveal the cost of coronavirus for Germany's tourism industry - And more...