Seven churches were moved on rails and hidden behind housing blocks in Bucharest during the 1980s. Anton Roland Laub's photo series 'Mobile Churches' tells their story — in Berlin's Chapel of Reconciliation. 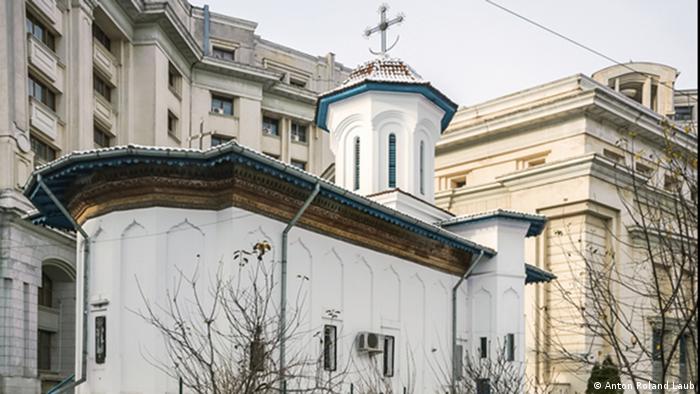 When Anton Roland Laub showed his partner the Romanian capital Bucharest for the first time, she was surprised to find passengers on trams or buses suddenly crossing themselves. "I hardly notice this anymore, because I was born and raised in Bucharest," said Anton Roland Laub, who moved to Germany in the year 2000 and studied at the New School for Photography and the Art College Weissensee in Berlin.

His wife, German literary scholar Lotte Laub, currently program manager of the Zilberman Gallery in Berlin, noticed that locals did not only cross themselves in a Christian-Orthodox way whenever they passed a church. Sometimes, they were only passing ugly socialist apartment blocks. "In this case, the churches were hidden behind the huge buildings or had been moved to another place, but the locals knew about them: This is how I got the idea to deal with this subject," Laub told DW. 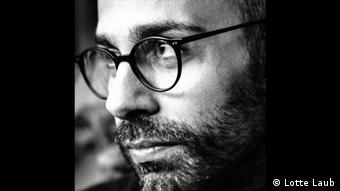 The photographer Anton Roland Laub grew up in Bucharest

Hiding and moving churches is part of a dramatic and absurd chapter of recent Romanian history.

After an "inspiring" visit to North Korea, Romanian dictator Nicolae Ceausescu destroyed one third of Bucharest's historic city center in the 1980s to make way for socialist apartment blocks and monumental buildings honoring the communist regime, such as the gruesome "House of the People" (Casa Poporului), which is still one of the biggest buildings in the world.

"My own family was affected by this so-called 'systematization.' The house of my mother's parents was destroyed and the family had to move to a small flat in an apartment block, on the fourth floor, without any elevators," Laub recalls. The house belonging to his father's parents was also on the list of buildings the regime wanted to wipe out — it only survived because Ceausescu was toppled in December 1989.

More than 20 churches in Bucharest were victims of the regime's destructiveness. But seven others were spared: They were lifted, placed on rails and moved to another place, a highly unusual technique that had been developed by Romanian engineer Eugen Iordachescu.

In the book "Mobile Churches," Anton Laub combines his recent photographs of these seven churches and one synagogue hidden between housing blocks with photographic material from archives that had been offered to him by Iordachescu. The tri-lingual book (with texts in German, English and French) was published by the German publishing house Kehrer in Heidelberg.

On June 5, the photography exhibition "Mobile Churches" opens in Berlin's Chapel of Reconciliation, which was built on the foundations of a church that had been blown up by the communist regime of East Germany in 1985.

The photo series was shortlisted for several international competitions, including the New Discovery Award at "Les Rencontres de la Photographie" in Arles.

"The technical details are not my main focus, I'm more interested in the reason why the churches were moved: They were supposed to be rendered invisible," the photographer explained. "Rather than simply being saved, they were pushed aside." 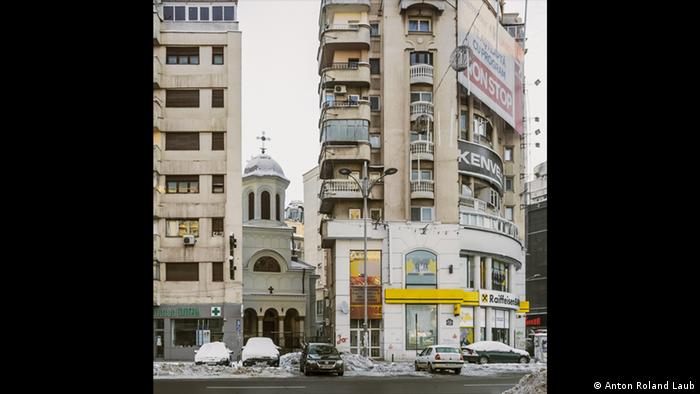 'In Romania, there's little public interest in confronting the past'

Each one of these churches was part of a larger context.

For example, Laub mentions the Annunciation Church of the "Retreat of the Nuns" (built in 1726), the first of the seven churches to be moved. "Initially, it was part of a monastery complex. There were workshops where nuns painted icons, they grew fruits in orchards, even the direction of the wind had been considered," Laub said. "But then, only the church survived, like some kind of carcass. It's ironic that you now find it behind headquarters of the secret service."

From 2013 to 2017, the photographer traveled several times a year from Berlin to Bucharest to take pictures of the churches.

He always chose the bitter Romanian winter, because the buildings can be observed much better when the trees are bare. "I took the pictures at minus 18 degrees Celsius (-0.4 degrees Fahrenheit), with a large-format-camera — the old camera where you go under a dark cloth — and everything hurt because of the cold," said Laub. "My partner always accompanied and supported me."

The research was a particularly difficult challenge, he recalls. "In the archives, the information wasn't always coherent, and was in different books and materials, so there were three or four versions of everything." All in all, there is little interest in confronting the country's past, the photographer said. 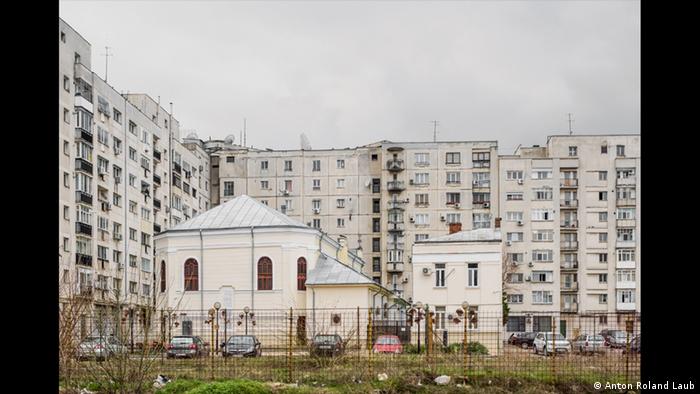 In her essay "City on Rails," included in the book "Mobile Churches," Lotte Laub writes that moving the churches achieved the opposite effect of what the communists wanted with their atheist ideology: "Rather than devaluing them in society's consciousness, it kept them alive, like a memory trace, and thereby gave them (the newest one was built in 1877) added importance."

Today, one of the largest Christian-Orthodox cathedrals in the world is being built in Bucharest.

Critics of this major project regard it as a sign of megalomania, reminiscent of the neighboring "House of the People." According to its plans, the huge cathedral will even be taller than Ceausescu's notorious palace.

This mammoth project is in line with what Anton Roland Laub describes as a "religious trend" in countries of the former East Bloc, such as Romania, Poland and Russia: "All sides flexed their muscles — and the Church has won over communism," said the photographer. "Inofficially, in today's Romania, I think the Church is even the strongest 'party.'"

My Europe: #Rezist — with the strawberry and the EU flag

The Romanian diaspora in Europe is protesting the corruption of the ruling PSD government in Bucharest. In Switzerland, writer Dana Grigorcea has taken to the streets and picked up her pen to defend Romania's judiciary. (04.03.2018)

Authorities said the driver died after he rammed his car into the gate of the Russian Embassy. It is unclear whether it was an accident or deliberate.