Romania's food safety authority says Romania is facing its biggest outbreak of African swine fever since World War II. More than 123,000 animals have been slaughtered as a result of the outbreak so far. 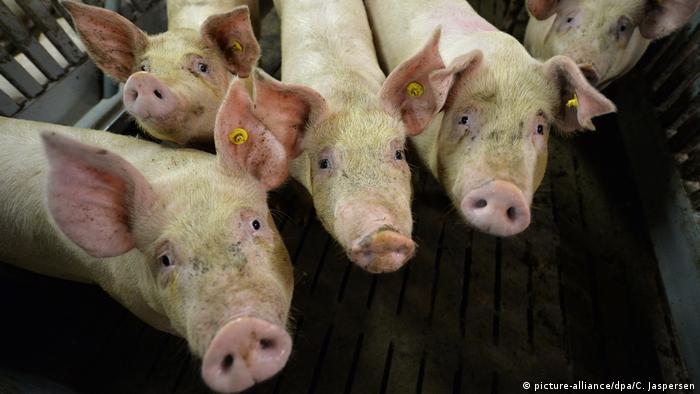 More than 123,000 animals have been slaughtered since the outbreak started a month ago, and it has now reached 11 of Romania's 41 local districts, said Geronimo Branescu, president of the National Sanitary Veterinary and Food Safety Authority (ANSVSA).

The deadly virus, which does not affect humans or other animal species, has been found within EU member states including Estonia, Latvia, Lithuania and Poland.

Branescu said authorities had already paid farmers damages worth 222,000 Romanian lei ($55,800) and there were some 700 claims for compensation still outstanding.

Iohannis, a critic of the left-wing government who holds a largely ceremonial role, slammed the Romanian government over the outbreak.

"For weeks, authorities have demonstrated their incompetence in stopping this disaster .... without us seeing appropriate, firm and efficient methods of control," Iohannis said.

All of Romania's pig farms were at risk, Iohannis said, adding that they produced half the pork consumed in the country.

ANSVSA said the outbreak was started by illegal meat imports, but cases of African swine fever have also been identified in wild boar.

Pig breeding is relatively underdeveloped in Romania due to the investment cost being much higher than what is needed to fatten the animals, according to a 2016 annual livestock report by the United States Department of Agriculture's Global Agricultural Information Network.

To keep up with the demand of its fattening facilities, Romania imports a large number of piglets from other EU member states. In 2016, Germany was the second-highest number of live swine to Romania with a total of 227,852, just behind Hungary at 300,524.

A Danish minister said he doesn't "want to take any chances" concerning the threat from across the southern border. The government cited the spread of a deadly virus in eastern Europe in making its decision. (22.03.2018)

Fertile soil and an incredible array of exotic fruit, vegetables and spices made Thailand a land of plenty. But as demand for meat there grows, industrialized farming practices are threatening this tropical paradise. (17.04.2018)

Arctic scientist Julienne Stroeve has seen the effects of greenhouse gases first hand. She has some long-term ideas on how to reduce them as well as some very simple short-term ones. (08.03.2018)