Roma Refugees from Kosovo Have to Leave Germany | News and current affairs from Germany and around the world | DW | 06.06.2002

Roma Refugees from Kosovo Have to Leave Germany

German interior ministers on Thursday announced that refugees from Kosovo should leave the country by the end of the year. But Roma or gypsy refugees say they're facing prosecution at home and can't go back. 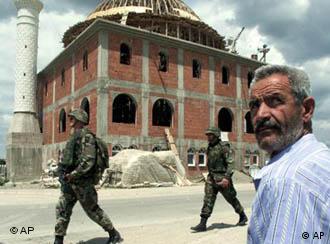 Is Kosovo still an unsafe place for non-Albanian minorities such as the Roma?

Ten years after the wars in the Balkans began, Europe is still grappling with a refugee problem. During the war in former Yugoslavia, thousands of people sought refuge in Northern or Western European countries. Germany took in the lion's share of these refugees.

Most of them have since returned to what's left of their homes and villages. But many Roma or gypsy refugees from the Balkans are still living in countries like Germany today – years after the fighting in former Yugoslavia has ended.

But now, time is running out for Roma refugees from Kosovo in Germany. On Thursday, the interior ministers of Germany's federal states or Länder gave them until the end of the year to leave the country.

The ministers are hoping that the refugees will return voluntarily. Some Länder might even offer the refugees incentives in the form of financial aid to help them resettle. But the interior ministers made clear that those refugees unwilling to return to the Balkans on their own would be sent back by force.

Roma afraid to go back to Kosovo

The ministers' decision met with protests from human rights associations in Germany and the country's Catholic and Protestant Churches. Church representatives said refugees of the Roma or gypsy minority would be extremely endangered if they were forced to return.

Even the Organisation for Security and Co-operation in Europe (OSCE) and the UNHCR in a common report published in May in Pristina described the situation for non-Albanian minorities in Kosovo as "extraordinarily precarious".

Though there are gradual improvements, the two organisations said there are still "blatantly violent, ethnically motivated attacks that sometimes result in the loss of human life" in the region. Even the UN administration in Kosovo has warned against forcing refugees to go back.

Some 600 Roma refugees demonstrated outside the venue in the northern German town of Bremerhaven, where the interior ministers met.

Most of them came to Germany during or after the 1999 military campaign in Kosovo. After the Albanians won the upper hand in the former Yugoslav province Kosovo, tension between the ethnic Albanian majority and minorities like the Serbs and Roma increased. According to a UN study, Albanian nationalists drove out tens of thousands of Roma from Kosovo. Hundreds are said to have lost their lives.

Roma people had long born the brunt of xenophobia in the region: their language is different from that of the rest of the local population, and so are their cultural values and traditions. And their darker skin easily identifies them as a minority.

Emergency aid for refugees is not the same as integration

Germany's interior ministers on Thursday made clear that the thousands of Roma who came to the country during the Kosovo crisis could not stay in Germany indefinitely.

Federal interior minister Otto Schily said that people seeking refuge from civil war in their home countries could only be given shelter for a limited time. Permanent resident status was impossible, Schily said. The minister explained it would undermine the willingness of the German people to take in refugees in crisis situations if all refugees were permitted to stay on.

Schily pointed out that emergency help for people fleeing a war was one thing, integration into German society another.

"The situation in Kosovo has calmed down to such an extent that Roma and other minorities aren't dependant on staying here with us," the Interior Minister of North-Rhine Westphalia, Fritz Behrens, said.

Otto Schily and the interior ministers of the German Länder said they would prepare and carry out the repatriation of the Roma refugees in close cooperation with the UN administration in Kosovo.

"We will not send anyone into an uncertain future," the chairman of the interior ministers' conference, Kuno Böse, said.

As Afghanistan settles down to an uneasy calm months after the ousting of the repressive Taliban, efforts have begun in Germany to encourage some 8,000 exile Afghan citizens living in the country to go back. (June 05, 2002)

Information about the Roma minority and the situation of Roma people in Kosovo.